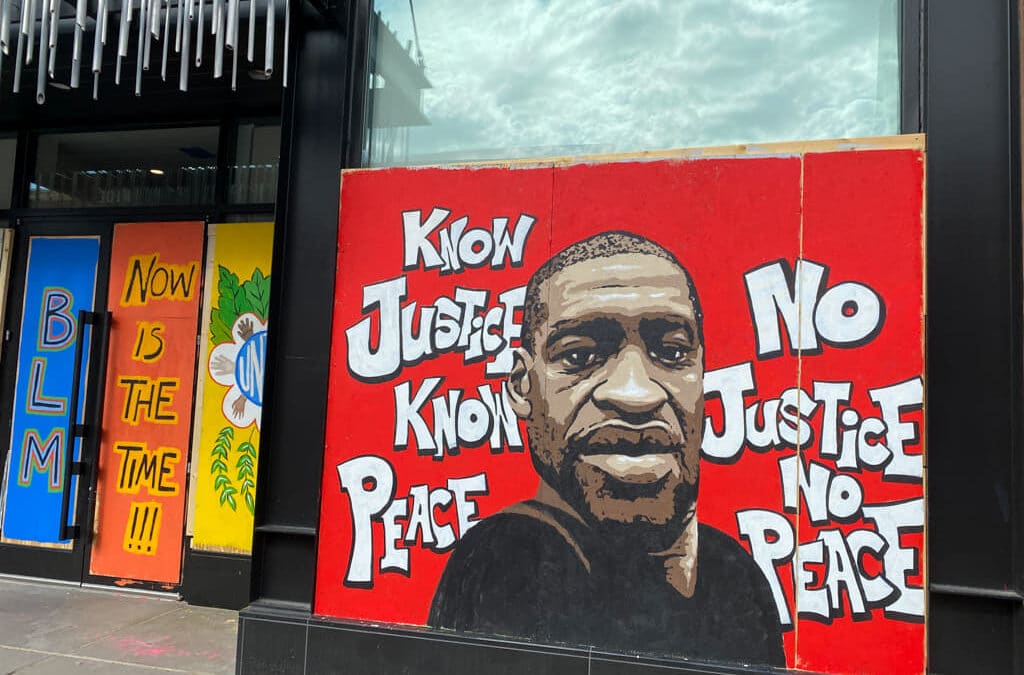 In May of 2020, the world was forced to slow down due to the COVID-19 pandemic.  After Memorial Day, people from around the world watched as George Floyd took his last breath while former Officer Derek Chauvin knelt on his neck.  For nine minutes and twenty-nine seconds, we watched a man’s soul leave his body.  We watched as his life was taken.  We listened to him call for his Momma.  People of all skin colors – from black, brown, gold, and white; from suburban moms to urban fathers; from politicians to clergy – took to the streets to protest this injustice which was not new to the Black community.

Two days ago, as I sat in my car looking at an alert that the verdict would be announced, I went through a series of emotions.  I felt angry, sad, and disappointed before even knowing the outcome.  Had the justice system failed us again?  I felt physically ill not knowing if this man who so casually knelt on another human’s neck with his hands in his pockets would be held accountable, or if he would be allowed to go home and sleep in his own bed while George Floyd sleeps in his eternal rest.  Would accountability finally occur in one of these cases?

A jury of Derek Chauvin’s peers took a little over ten hours to decide what we visually knew.  Until the last of the verdicts was read, I did not realize I had been holding my breath. I exhaled for what seemed like the first time, yet there was no relief.  Just minutes before the verdict was read, a fifteen-year-old Black girl in Ohio was gunned down by an officer.

Accountability in one case does not provide accountability in others.  Sandra Bland’s family still wonders what transpired in her cell.  Tamir Rice is frozen in time as a twelve-year-old child while his killer walks free.  Officers who commit crimes against Black and brown people can often jump from city to city and state to state to find jobs, and their bad deeds are covered by unions who believe that Blue Lives Matter and they deserve more protection than the average American.

A surgeon, nurse, or any other health professional who voluntarily takes a life is held accountable.  I do not fear seeing my doctor, seeing a nurse, but I fear seeing blue lights in my rear view mirror.  I fear letting my six-foot-tall autistic son walk fifty feet to our mailbox.  My son has been deemed a threat since he was born because of the color of his skin. I fear letting him just walk around in our front or back yard and having an overzealous neighbor call the police on the brown person lurking in his own yard.

In nine minutes and twenty-nine seconds, my life could be over.  Yesterday’s verdict does not bring George Floyd back.  Chauvin’s attorney attempted to use the big Black guy defense.  But the only thing we saw was a Black man being ripped from his family, his life placed under a microscope for the world to judge.

The verdict has been read, but he is still gone.  I did not know Mr. Floyd, but in his cry for his Momma, I could hear my son’s voice and I could not reach him.  One person was held accountable, but the whole system needs to go on trial now to fix what is broken.