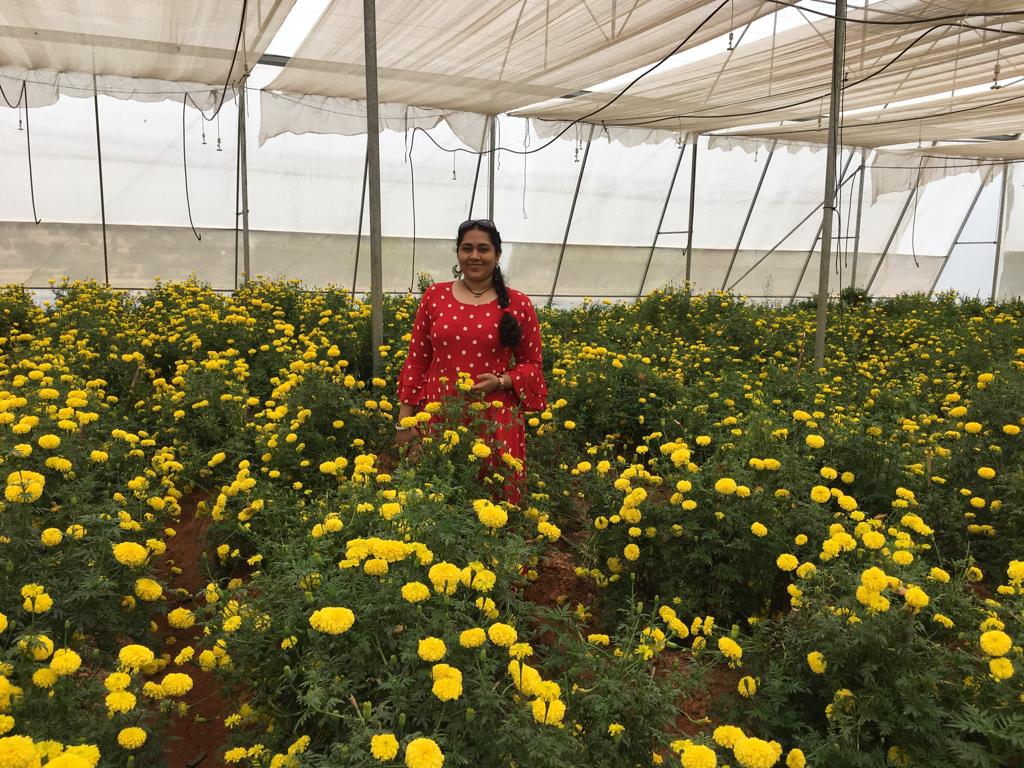 Next time you present a bouquet to your loved one or while welcoming a guest, thank the people of few villages in Krishnagiri district in south Tamil Nadu in India. Millions of these petite and fresh flowers spread fragrance in UK, Germany, Australia, Singapore  and Middle East. They bloom in plenty in Krishnagiri district in towns like Thally, Kelamangalam, Denkanikottai, Shoolagiri and Hosur. Though these places are just an obscure speck on the map of India they are some of the important floriculture address of the country. How do these colorful flowers bloom here? Does the hot and humid climatic condition of the country suit them? The response is a little dicey.  The way the flowers are grown in the gardens, situated at an altitude of 1000 feet above mean sea level is the answer to the questions.

Untouched by pollution and tourists these rose gardens are tucked away in small villages spread all over the Western Ghats on the border of the two states of Tamil Nadu and Karnataka.

All along the well-laid roads that meander on these not too tall hills dot rose gardens where men, women and children, with a covering on their head, tend to rose saplings. A few feet away, in what seems like a plastic house and net structures, stand long rows of flowering plants. Inquiries reveal that these ubiquitous plastic shields are polyhouses.

Though they look like simple gardens, they are large farms where the flowers were grown using modern technology. The polyhouse is a structure made of translucent material like glass or polyethylene which help the plants grow and develop under controlled climatic conditions.

Narrow paths from these polyhouses lead you to hi-tech floriculture companies. It is here these flowers are plucked at the right time, cut to size with the right machines and preserved in huge cold storage rooms before being packed off to the local market and local airport, to be flown abroad.

Those who manage them are not local farmers but engineers, IT and management professionals.

Bright roses, rich marigolds and huge carnations is the capital that drives them to invest more and more in this industry. One such businessmen who turns over crores annually is Jitendra Kumar Bajoria, who hails from Bagalpur in Bihar State.

Attracted by the nip in the air and the lush green landscape, this entrepreneur developed a rose garden on an acre two decades ago. Enthused by the results he decided to go commercial and took a big business plunge. He set up huge flower farms on 65 acres, – Maa Floritech _  at Agalkottai in Denkanikottai taluk in Krishnagiri district in 2006.

As time flew by, the farms became hi-tech but shrunk to 45 acres.  “We boosted production by modernizing the farm and using Israeli farming technology, said Kush Chokhani, manager of Maa Floritech, Agalkottai village.”   Using  Israeli technology, cultivation of roses and carnations grew in leaps and bounds on these farms.  They did not just increase in numbers but in varieties too. “Today we have 82 varieties of chrysanthemums and 25 varieties of roses on our farms,” said Mr. Kush.

How are saplings actually grown and tended?  “The specialty of Agalkottai are the following. Altitude (1000 m above mean sea level, red soil (ideal for roses), temperatures always hover around 23 – 30 degrees centigrade (good for chrysanthemums, marigold and roses),” said Mr. Kush.

The cuttings are planted in straight rows inside the polyhouses. Apart from air, water and soil the flowers need nutrients too. “We give them at the right moment when they get depleted in the soil. Thanks to Israeli technology nutrients such as calcium, magnesium, sulfur and potassium are sent through pipes embedded in the soil. Similarly whenever there is an increase or decrease in temperatures inside the polyhouses, the technology helps to control it. For instance, there are tiny fogging machines (fully automated drip and fogger system) which sprinkle water over the plants when it becomes hot,” said Mr Kush as he turned on the fogging switch.

It is a sight to watch these tiny robots swirl around and sprinkle water on the plants. For a minute, you are transported to a rainy setting.  “Also when it is cold outside, the temperature is survival- friendly for the plants as the polyhouses stop the greenhouse gases from leaving,” explained Mr. Kush.

Though there are less pests and insects inside a polyhouse, Mr. Kush opines that there is a need for regular consultation regarding the right kind of fertilizers and fungicides for the plants. “We are always on the look out for a a breakout of pests such as thrips, mites and aphids. The plants are susceptible to Powdery mildew ( a disease) when there is less humidity.”

Horticulture officials in the district are of the view that these enclosures also ensure disease control, fertigation and other agronomical practices.  Thus the farmers of the region are assured of harvesting flowers such as carnation, gerbera, marigold, orchid and roses throughout the year without  worrying about crop loss or damage.

Micro irrigation system ensures right amount of water for the roots (cuts water use by 80 per cent). Mainly the poly houses boost starch production as the carbon-dioxide emitted by the plants at night is retained inside the enclosure.

These polyhouses offer other sophistication too like the photo-synthetically active radiation (PAR) lighting. Plants grow tall under these lighting. But when they reach a specified height, lights are switched off and flowering commences.  Thus the Israeli technology helps control photosynthesis, humidity, good aeration, temperature and other conditions.

Once flowering commences, care is taken to cap each and every rose bud with a synthetic mesh to control its size. Rose stems ready for harvest during sunny days have to be pre-cooled. Soil and water need to be tested regularly. According to Mr. Kush, one cannot succeed in hi-tech farming without personal attention.

Once the flowers are in full bloom, they are harvested, precooled for 12-16 hours at 8-10 degrees in a cold room. The stems are then de-leafed using machines 25 % from the bottom. The stems are then graded for length. They are then bunched based on the length. “A bunch consists of 20 roses. They are wrapped after cutting and packed in a preservative for storing in cold rooms. They are taken out based on the orders,” explained Mr. Kush.

“We keep updating ourselves with new techniques and news about market conditions,” said Mr. Kush. There is regular knowledge-transfer to workers about upkeep of plants, weeding, transplanting, cultivation methods, irrigation, nursery development de-leafing and cutting. The workforce are not only from Tamil Nadu state but also from Northern states like Uttar Pradesh, Jharkand and West Bengal.

While men prepare the flower beds, carry buckets of water and remove weeds, women are involved in harvesting, de-shooting and other light jobs.

Based on their skill they earn approximately $ 4 to $ 5 every day. With a growing demand for these flowers, it will definitely attract more entrepreneurs . Indian chrysanthemums, roses and marigolds are sure to find a place in many a bouquets in every part of the globe soon.