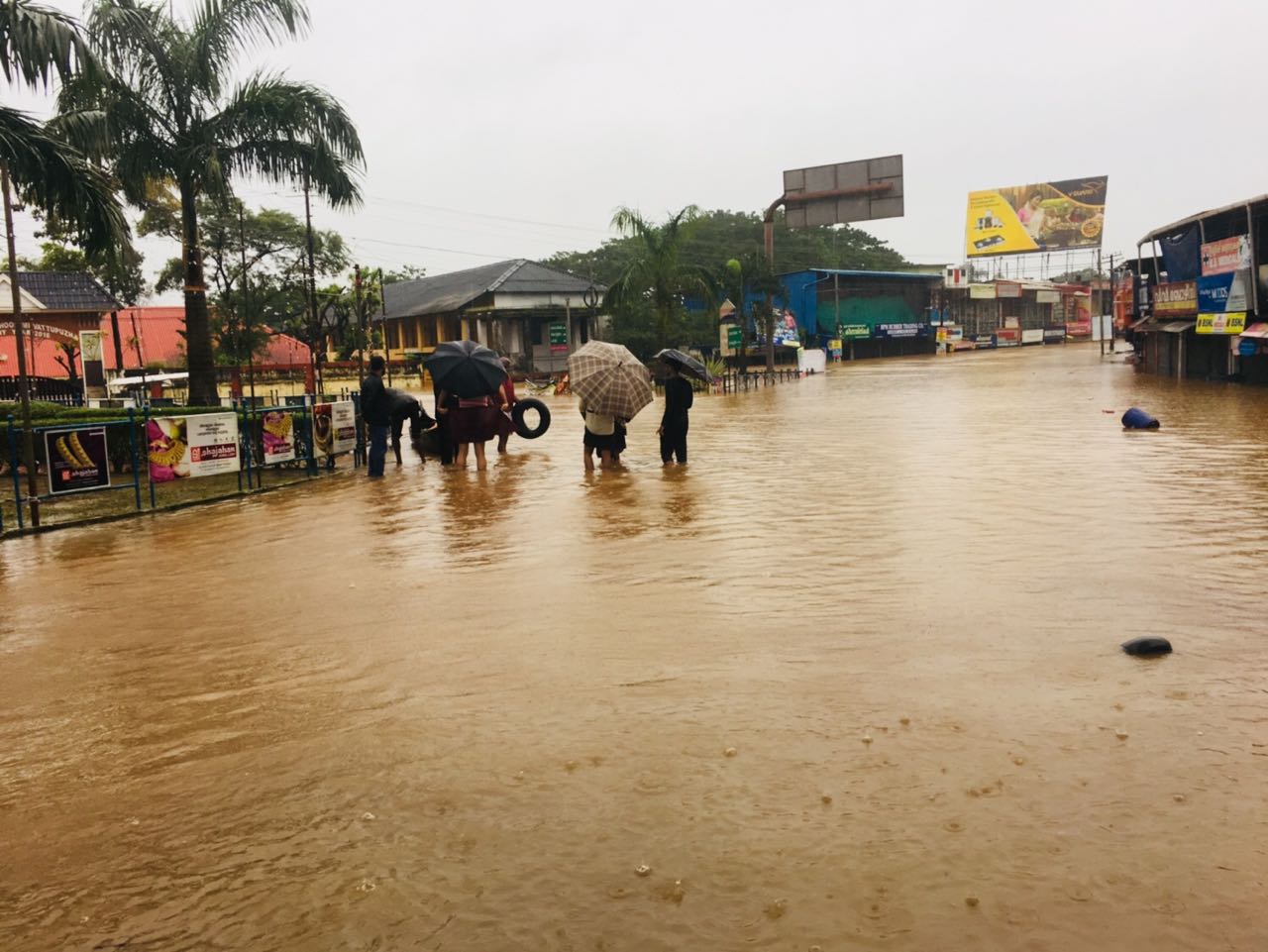 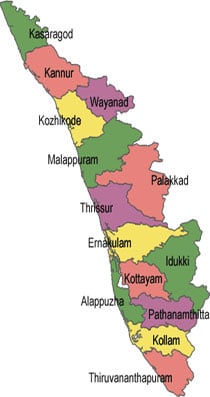 Heavy rain during June and July is a normal phenomenon in the state of Kerala in South India. This year, the effect of the South-West monsoon was more profound not only in Kerala but in the neighboring state of Karnataka too.  Though meteorologists are of the view that it is not unusual, climate experts feel that it is a fierce reminder to India about climate change.

Though Kerala experiences heavy rain due to the South West monsoon, this year the rain was unprecedented not only in Kerala but in major parts of the adjoining state of Karnataka too. Even in their distant dreams, people of Kerala did not expect to face a calamity due to rain, which was a normal phenomenon all these years. 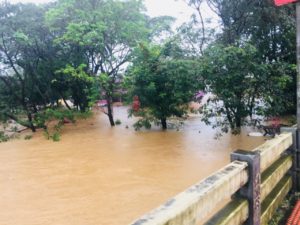 On August 9, large parts of the state woke up to large-scale devastation as the monsoon renewed its date with the state. There were flash floods and landslips in several places and the State Disaster Control sources were caught unawares.

Within 24 hours, death toll began to rise and the Indian government employed personnel from the Army, Indian Air Force, Navy and National Disaster Response Force (NDRF) to the worst-hit districts of Kozhikode, Wayanad, and Malappuram. 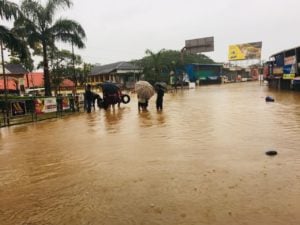 People Wade Through the Flood Waters

“On August 12 we were given the first alert, when the authorities said they would be opening the Idukki dam (built on the Periyar river), which was reaching full capacity after a span of 26 years, if it overflows. Unfortunately, heavy downpour forced the authorities to open all the sluices within 24 hours and there was chaos and disaster all around,” explained Bindu, a resident of Ernakulum, presently relocated to Chennai. Deadly landslides bashed Idukki district, which was known for its tea and cardamom plantations, winding roads and scenic resorts. As Idukki is situated at a high altitude in the Western Ghats, people were unaffected by natural disasters such as storms or hurricanes but little did they think that torrential rain would displace their livelihood. “Our place was always referred to as Kashmir of Kerala. My heart bleeds when I see my hometown battered brutally,” said Anand Kuttan, whose entire family is employed in the tea plantations in Munnar (Idukki district).

By August 13, the India Meteorological Department (IMD) issued a red alert to eight districts – Alappuzha, Ernakulam, Idukki, Palakkad, Malappuram, Kozhikode, Wayanad and  Kannur. It was extended to others in the next few days.

But the scope of the disaster had outpaced efforts to cope with the disaster and the state had set up several flood monitoring stations and all of them notified extreme flood situation. The two regions that bore the brunt of the rain fury (August 19, 20) were Kuttanad and Chengannur.

The government took all efforts to help stranded residents. They involved all kinds of aircraft and boats. But, the real heroes who stood by the government and rescue personnel were the fisherfolk. They hurried to the flooded areas with their boats in which they navigate the high seas. In fact, they were the first to rush to Chengannur to rescue the marooned by the Pamba river. Said Bindu, “While the Army and government agencies could only  concentrate on towns, the fishermen deftly reached out to those in remote areas.”

The fishermen battled the adverse weather, held on to trees to veer the boats in the right course and faced the challenge of a strong water currents. They helped rescue heavily pregnant women, infants and almost swam in and out of all homes in a number of villages looking out for disabled persons and elderly.

“Women had no stamina, especially the elderly.  They had very little endurance, especially after the loss of property and near ones, they could not bring themselves to board the rescue boats,” added Bindu.

“They had to be cajoled and even bodily-lifted. We Keralites are attached to our homes and we could not bear to see it ravaged,” wailed Suresh her brother. 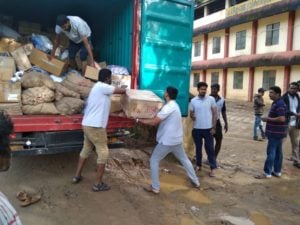 Relief Materials Being Transported to Kerala

Rain battered Kerala breathed easy only after August 19. According to officials over 2.55 lakh people were displaced and there was a steady rise in death toll.

But, despite being handicapped in all ways, Keralites rose up to the occasion. They did not panic, though their morale was badly down. Several NGOs and private relief teams swung into action from nearby Tamil Nadu and all over the country. Relief material began to pour in and they were housed in over 7, 24, 600 relief camps all over the state. 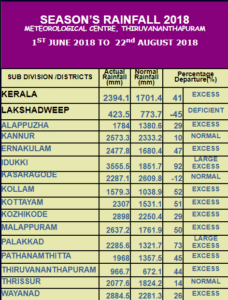 According to the IMD, in just 20 days (August 1 – 20), Kerala had received the highest amount rain in 87 years. Idukki district alone received a breaking record of 1419 mm in August (till 20). Scientists opine that this is a once in a century rain which has displaced more than 1.3 million people in the state.

According to farmers, they have received nearly two and a half times the normal amount of water across the state, during mid-August. “We depend on the right amount of rain at the right time for our livelihood and food. How do we cope with this situation,” asked, Lakshmanan a farmer of Ernakulam?

Thousands of hectares of agricultural land are under sheets of water. Paddy and banana were the worst hit by the flood and they are yet to know the actual loss which they expect to be very high. The state has also lost poultry, milch animals, and ruminants.

The floods have washed away multi-storeyed buildings, commercial establishments, bridges and eroded roads. Several tribal communities, hilly areas and villages are still surrounded by the swirling flood waters and totally cut off from the rest of the state.

The flooding also affected the Kochi airport as it has been built on the floodplains of the Periyar river. According to officials, the airport has been carved out of paddy fields. “All rivers have a floodplain that is used to hold water and if the government does away with such an integral part of the water body, who can we blame now?” ask activists and experts. 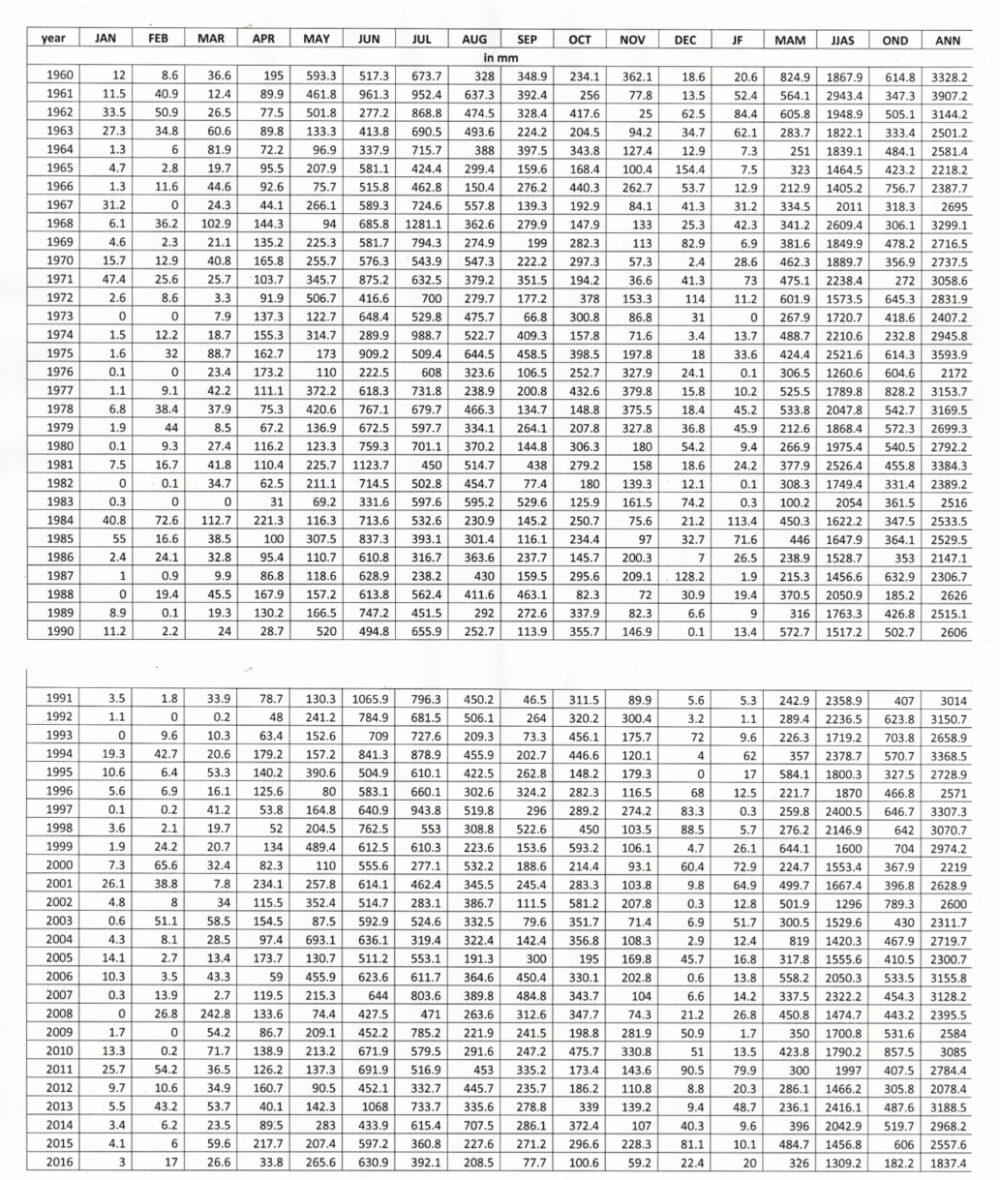 With millions displaced in flooded Kerala, climatologists warn that devastating floods of this enormity will become a norm if the Indian government has a callous approach towards climate change.  This is a major challenge that is staring at the country now and most of its plans to deal with it are more rhetoric and lesson planning and policy decisions.

The situation has created awareness among the residents about the importance of preserving the environment and its role in climate change.

After reading the report submitted by scientist Madhav Gadgil (headed the Western Ghats Ecology Expert Panel formed by the Ministry of Environment and Forests in 2010), many of us feel that the problem faced by the state due to the floods was partly man-made, said Aparna, a resident of Ernakulam.

A high-level working group had also recommended that state governments should prohibit projects and activities in the ecologically sensitive area which have a maximum destructive impact on the ecosystem “Wish we had taken proper steps to preserve the fragile eco-system of the Western Ghats and followed environmental laws. Above all, we feel that the government should have strongly recommended a ban on new industrial and mining activities.”

Families in districts such as Idukki and Ernakulam, where destruction was gargantuan are critical about the attitude of the government. They opine that without a concern for the environment, hotel owners, real estate sharks, and land mining mafias were encouraged to set up business here and this has spoilt the ecosystem of the state.

Wetlands and lakes, which is where the floodwaters should have taken refuge have all given way to concrete structures. “If the government does not form committees and involve more officials to conserve the environment, all the highlands, Midlands and coastal plains in the state will suffer damage of increased magnitude due to unjustified human intervention,” opine some of the residents of Kerala.