World Voice: Akka – A Visionary Who Won the Hearts of Little Ones #WorldDayAgainstChildLabour 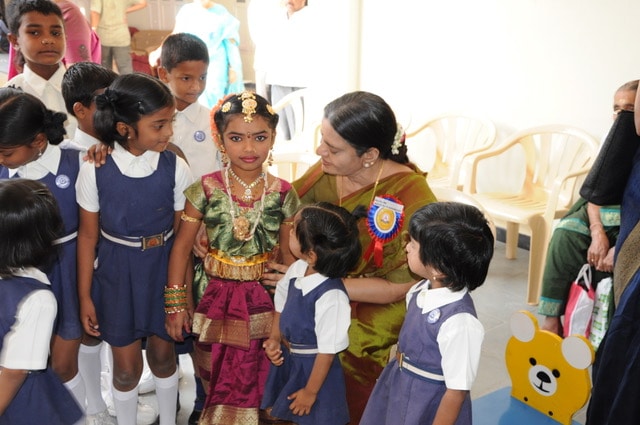 The International Labour Organization (ILO) launched the World Day Against Child Labour in 2002 to focus attention on the global extent of child labor and the action and efforts needed to eliminate it. Each year on 12 June, the World Day brings together governments, employers and workers organizations, civil society, as well as millions of people from around the world to highlight the plight of child laborers and what can be done to help them. Today, on World Moms Network, we commemorate this day by writing a tribute to Mathioli R. Saraswathy, a philantrophist who dedicated her life for the betterment of the lives of children. 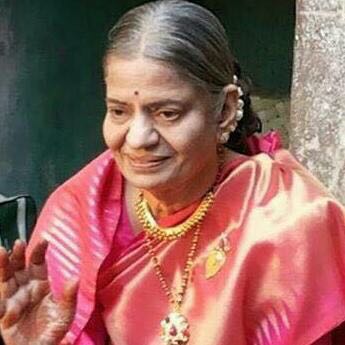 Mathioli R. Saraswathy, the founder of Nandalala Seva Samithi, who passed away on May 9, 2018, was fondly called as ‘Akka’  by her loved ones all over the world. She was a legend who not only looked beyond the ambiguity and challenges of every day but also foresaw the empowering picture of tomorrow for them.

‘Akka’ is an endearing word that defines a close relationship. In the Tamil language, it refers to one’s elder sister, who is supposed to be a step above the rest. True to this word, she who was held in high esteem, was actually an exception to this rule as she mingled freely them.

Akka established Nandalala Mission, a non-profit organization, in the early 90s in Chennai to nurture the fullest potential of children through educational, cultural, physical and service-oriented activities.

Age was no barrier for this 78-year-old enigmatic personality who was always befriending little ones all over the world. She believed that every child is bestowed with creativity and encouraged their latent talents.  She had no linguistic barriers and made them understand her love for them and they too reciprocated their abiding love for their dear ‘Akka’.

She loved being with them, conversing with them, playing with them and elaborating about this beautiful world around them. She could talk with ease about flowers, trees, birds, animal, sea, and stars. In her eyes, children reflected the finest blend of grace, charm, and beauty of the world. Just like the child in ‘Akka’ was alive until her last moments, she will continue to live in the hearts of the little ones all around the world.

Though this charismatic personality disappeared from their lives forever, the little ones still look forward to her visit at the Nandalala Temple, part of the Mission, located in Chennai, the capital of the state of Tamil Nadu in India.

The little ones are not alone. Their mothers, older sisters, and even grandmothers miss the frail figure who was more than a mother to every one of them. “She was our ‘Amma’ (meaning mother in Tamil) and will always be, they say.  On the day her soul left her body, one could see that it was a big blow to the women who were involved in various activities of the Samithi with their ‘Amma’.  “We do not know to live without her guidance. She was always there whenever we faced any problem, official or personal. Whom do we turn to now,” they wailed. 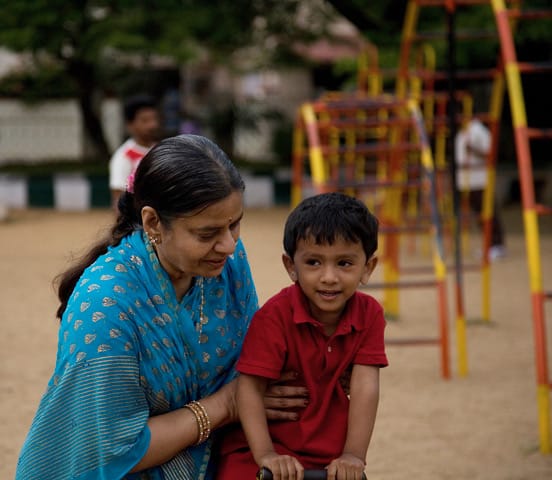 Mercifully, this image is sustained from anecdotes drawn from their lives. Anecdotes that prove that Mathioli Saraswathy was their mother in all ways throughout their lives.

For Vidya, who was plagued with a number of personal problems Akka was a good mother who internalized her. For more than a decade now, she has always helped her to tide over innumerable problems. She has counseled her like a mother and helped her to unleash her potential and become independent.

Says Vidya: Akka was of the view that external parenting always made a child dependent on its mother. But if you internalize and facilitate the child to be aware of its potential, the child will achieve greater heights. More than that it will not mirror its patent’s potential and this alone will help it to achieve its goal in life. 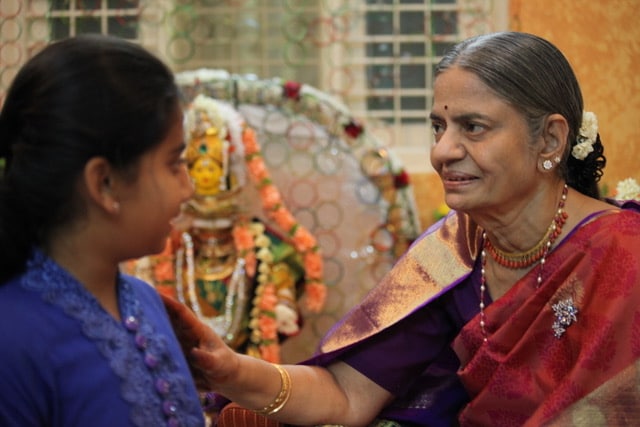 “Mathioli Saraswathy always believed that good daughters can become an effective mother,” said Seetha Nagarajan, who is a globetrotter and who has been associated with her for nearly four decades now.  She goes on to explain that it was because of this the Chennai chapter of Nandalala Seva Samithi began an activity called ‘Mathruseva’ (meaning service to mother) through which the underprivileged were given free food.

Seetha Nagarajan saw Akka open chapters in San Francisco, New Jersey, and Los Angeles. “They were all begun one after the year between 1997 and 1998,” explained Seetha.

She goes on to explain some of the activities in these places. In the early years, volunteers of the Mission took children to local museums, volunteering at local homeless shelters, talent shows, and quiz competitions.  As ‘Akka’ always believed in feeding the poor and needy, volunteers focused on services on a larger scale. They distribute sandwich bags, provide meal services at community shelters and soup kitchens. Children too are involved to make them undergo the joy of giving and bliss of social services.

The Mission also provides a platform for children to showcase their talent. “A youth concert series was begun to give a home-concert environment for budding artists. This has not only encouraged children to perform before an august audience but has also been well received by the residents. A concert is organized every month,” said Seetha.

“The Mission also distributes scholarships to well-deserving under-privileged students from India and also reaches out to children on a broader international scale. “Also, on an ongoing basis, the Mission has been donating books to school libraries in Australia, Canada, and India.

Life of ‘Akka’ who was born in Puducherry on October 9, 1940, was entirely dedicated to philanthropy. With the aim of serving the needy, she began numerous trusts such as Nandalala Seva Samithi, Sri Nandalala Religious Trust, Nandalala Medical Foundation and Yogasaras Educational Academy in Bengaluru, New Delhi, Hyderabad, Tiruchy, and Tiruvananthapuram, in India.

She was always of the view that the trusts helped children not only tread the path of love but also instilled values-based systems and made them imbibe Indian culture.

Apart from the trusts, ‘Akka’ provided financial assistance for the underprivileged in India too. Economically-deserving students were not only given financial assistance to pursue their higher studies, but also uniforms and food. The summer camps held exclusively for children at various places in the city helped them to hone their creativity and learning skills.

Managed under the banner of Nandalala Medical Foundation, she had set up a low-cost dialysis center, clinics for ENT care, eye care, physiotherapy, and acupressure.

‘Akka’ was also a prolific writer. She has penned innumerable poems, songs, prayers and stories for children and philosophical commentaries in Tamil. Some of her works have been translated into English as well. Art was an integral feature in all her books.

In 1998 and 1999, she was awarded the national NCERT award by the Indian Government for her work for children. She was awarded a gold medal in 1991 for her book on science “Vinnilirundhu mann varai” by the Children’s Writers’ Association.

Apart from this, she had the habit of releasing books on Christmas every year and has been doing so for more than three decades.  These books were published by Akka to showcase her love for children.

Yes, passing away of this legend has not dimmed her appeal. She still remains a friendly spirit, hovering around.

This is an original post for World Moms Network written by guest poster, Lalitha Sai, in India, as a tribute to ‘akka’. 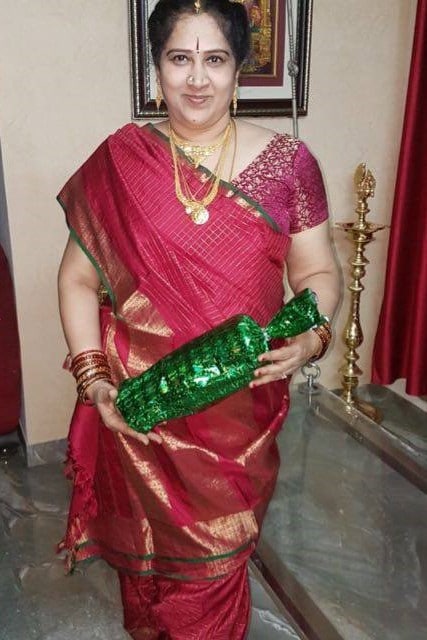 Lalitha Sai, is a writer based in Chennai, India. She is happily married to a police officer. Her son is an engineer in Europe, and her daughter is a doctor in Chennai. She has 25 years of experience in journalism and has held posts of senior editor in the leading news dailies of India, “The Hindu” and “DT NEXT”. She focused on women empowerment in her articles.

She is now working as the head of operations of content releases in a private company.