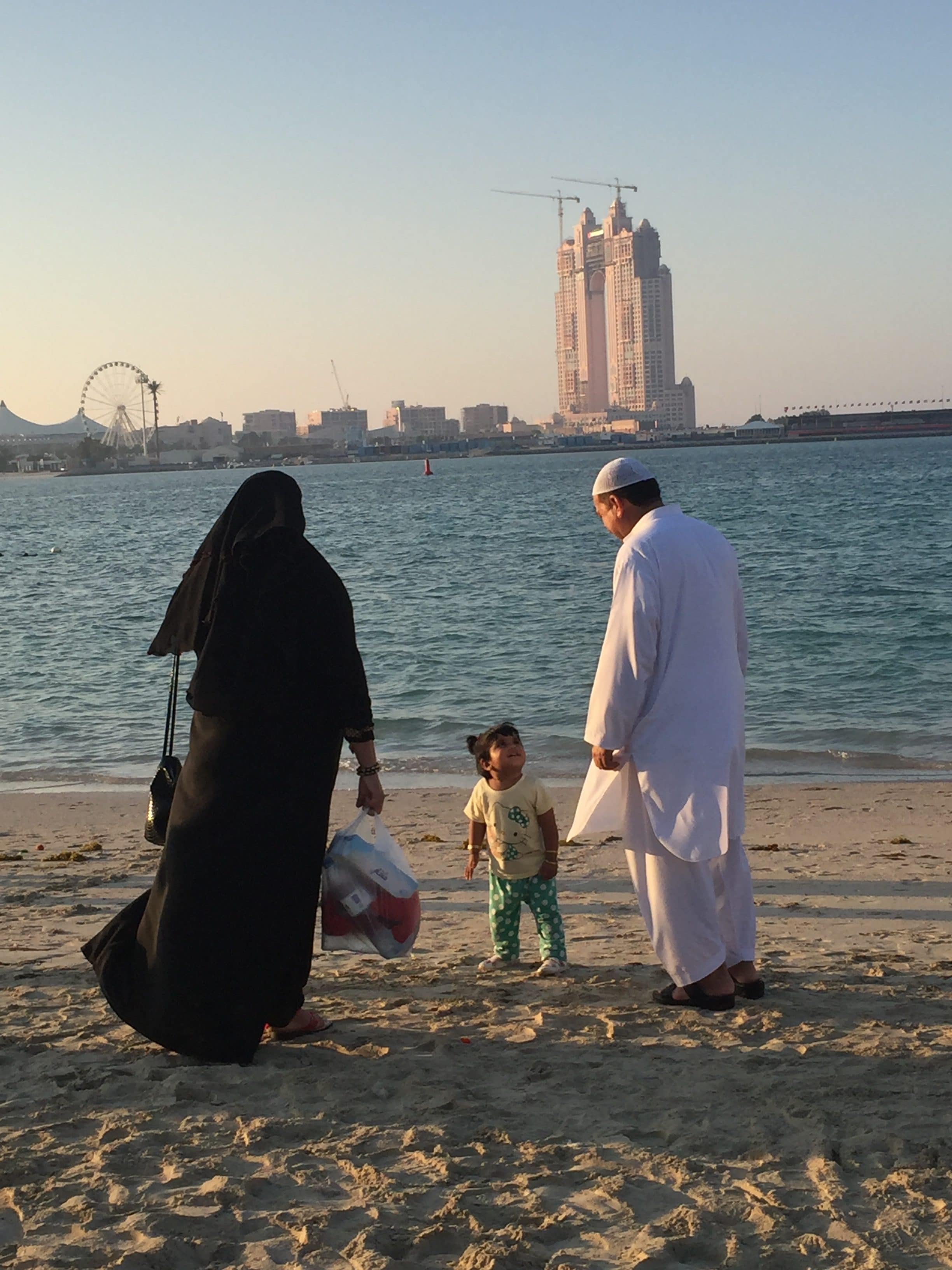 I live in a country where it’s bathing-suit season all year. As a woman “of a certain age,” as they say in France, that fact does not exactly fill me with joy.  My bathing suits tend to be utilitarian affairs, more designed for walking along the shore than glamorous sunbathing. Because I live in the United Arab Emirates, however, my friends in the States assume that there is some sort of dress code that mandates what I can wear. Ironically, I wish they were right, but they’re not. It would be great to blame a dress code for my demure swimsuit, rather than admit that it’s my love of bread (and occasional glass of wine) that led me to the one-piece life.

Sometimes I think it’s a betrayal of my feminist principles to be self-conscious about my middle-aged tummy (apparently when I turned fifty my metabolism pretty much decided to leave the building), but I can’t help it: my belly and a bikini aren’t going to be keeping company any time soon. Thinking about my own body makes me wonder how mothers of daughters negotiate the potential land-mines around issues of body image. I have two adolescent boys, and while I know they wrestle with questions about their physical appearance, it all seems less fraught for boys than for girls (ah, patriarchy: the gift that keeps on giving). 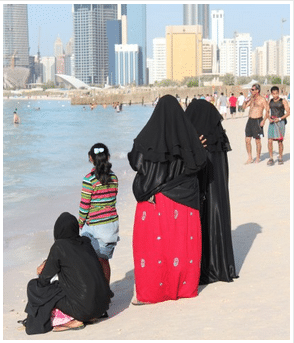 I see teenage girls on the Abu Dhabi beaches in the tiniest of bikinis and wonder what I would say to my daughter, if I had one: I’d want to encourage her to wear whatever the hell she wants, on the one hand; and on the other, I’d worry about having her be so exposed, both literally and figuratively. I once joked to a friend of mine whose daughter is sixteen that perhaps all girls should wear “burkinis” and not just those who want to maintain hijab while at the beach.

At the beaches in Abu Dhabi, there are burkinis and bikinis and women wading in the water with their black abayas billowing out in the waves. Men in salwar khameez splash each other, while Russian men in tiny speedos do laps across the beach front.

Pink-skinned Brits crisp themselves in the sun (mad dogs and Englishmen, after all), and children of all sorts laugh and play in the waves. My teen-age sons see the beach as a place to play soccer, paddle-board, and hang out with their friends (preferably as far away from me as possible). I see the beach as a cosmopolitan space that allows for, and respects, individual differences—this person covered up, this person barely dressed—even as we’re all there enjoying ourselves.

When I told my kids about my beach-as-cosmopolitan metaphor, they scoffed. “It’s just a beach,” they said. But I wonder. In a world that is slipping faster and faster towards intolerance, nativism, and fundamentalism, I’m happy to grab at any indication that people from different worlds can exist happily in the same place.

What the beach also provides, much to the shared chagrin of my sons, is an opportunity to talk about (ssshh!) girls. Or rather, desire. And bodies, and respect. We talk (well, okay, I do most of the talking) about what it means to find someone attractive, and about how they feel about themselves in this public and uncovered space; I try not to laugh when the thirteen-year old mocks the sixteen-year old’s subtle bicep flexing when a cute girl walks by. I remind them that it’s okay to feel insecure about how they look (there was much scoffing at this point, and then some quiet questions). We also talk about the importance of looking past what someone is (or is not) wearing—and after one of those conversations, my younger son said, exasperated, “we’ve lived here for six years. Robes or no robes, covered or uncovered, I don’t really care. Can we get ice-cream?”

Ice creams were indeed purchased, although I didn’t have one. Maybe with enough “no” on ice cream, a bikini won’t be out of the question by August.

How do you talk with your tweens and teens about their bodies, and all the related issues? And how can we make sure that our own issues with our bodies don’t inflect how our children think about theirs?

This is an original post written by Mannahattamamma for World Moms Network.