UAE: A Lesson on Love and Loss 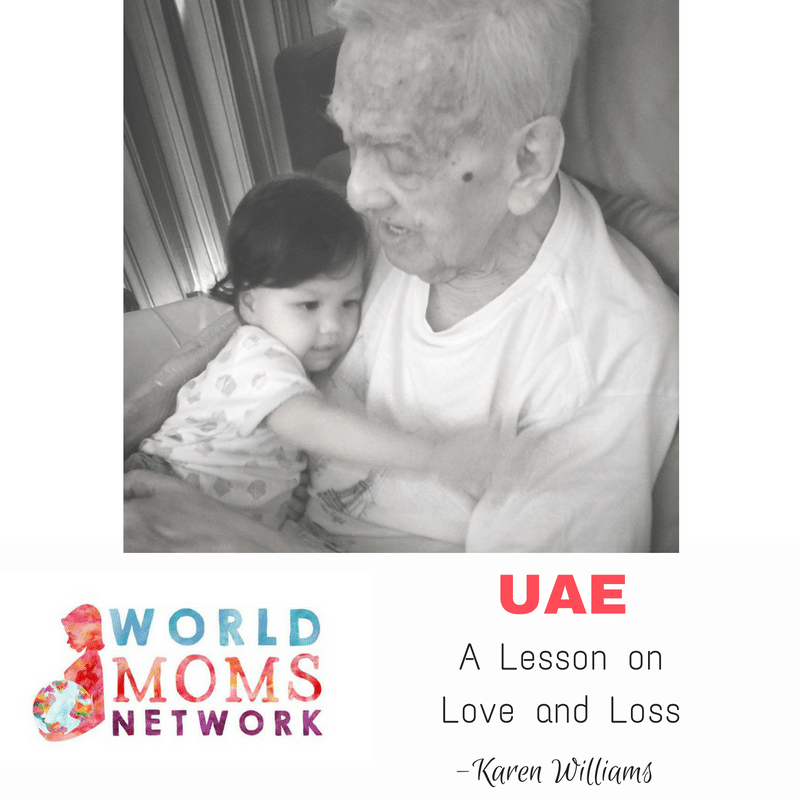 My husband’s grandfather recently passed away at the grand age of 94. Along with other members of the family residing overseas, we rushed home for the funeral. As we prepared with the packing and arrangements, my husband and I wondered how we should tell our daughter. Would the loss of a loved one would be too complex for my three year old to understand?

How would we explain this? What might she feel? How could we help her to deal with these feelings? Would she be confused and scared if she saw others expressing sadness over their loss? Previous parenting challenges diminished in the light of this gargantuan one; it seemed so daunting that we shelved the topic temporarily.

When she asked why we were packing, I said we were going back to Singapore. She asked innocently, “For a holiday?” After a long pause, I explained that Grand-Papa had gone to heaven and we needed to tell him goodbye. “He’s in heaven, like Nanny?” (Nanny is her great-grandmother who passed away the year before she was born.) After that, she carried on playing with her toys. While I was glad we had this conversation, had she really understood?

In Singapore, the wake is usually held before the funeral. The open coffin is displayed for friends and family to pay their respects and say their farewells. With the coffin on a raised platform, I was relieved that my daughter was not tall enough to see. However, sometime that afternoon her grandmother walked up to the coffin with my daughter in her arms. I suddenly realised that my daughter was looking at her Grand-Papa’s body and my heart leapt. But contrary to showing any fear or confusion, she just looked at his peaceful face and commented, “Grand-Papa is sleeping.”

On the day of the funeral, she amazed us with her good behaviour. I had been worried she’d want to walk around during the service, but she seemed to sense the gravity of what was happening and knew she had to sit quietly. She asked me a few questions but was quite content to sit on my lap or next to her grandmother. When it came time to say our farewells, I gave her a rose to lay on her Grand-Papa and whispered into her ear that she had to say goodbye. After looking around at her family, she turned back and said, “bye Grand-Papa.” It was such a sweet send-off to her great-grandfather of whom she has such loving memories and whom she had the privilege to know. I tried to hide my tears as I hugged her tightly.

As a parent, I worry about my daughter all the time. Each time we move to a different county, I worry about how she will adjust. I fret about her relationship with her family whom she sees maybe once a year. I agonize about how she’s eating and sleeping, and if she’s growing well. Most of all I worry about the world she lives in, for it can be such a scary and hostile place. And while I want to protect her from every single danger, I know that she has to face disappointment, sadness and most recently, loss.

In trying to protect her, I underestimated my child and how mature she can be. She might be very young, but she surprisingly taught me something in her own experience. She had shown no signs of being upset or afraid, even when looking at her resting great-grandfather. It wasn’t because she did not understand, because we recently had a conversation about Grand-Papa and Nanny being in heaven, and she exclaimed that it was unfair as she missed them very much. She really does understand that they are gone and she can’t see them anymore.

Even though she has not experienced loss to the same depths and understanding that we have, she has comprehended it in her own way. When she saw her great-grandfather, she had recognised his face, and remembered him playing games like “tweet tweet, where’s the birdy” and “meow, where’s the kitty cat.” She had remembered going to his house in Singapore and sitting on his lap while he talked to her in his ever-gentle voice. All she had seen in that face was love. And if that is her strongest or only memory of her Grand-Papa, she is truly blessed.

I can’t shield my child from everything, nor would I want to. I strongly believe that she has to go through pain, mistakes, struggles, and loss in order to fully appreciate people and what she has in her life. It will make her a stronger person, it will give her perspective and hopefully it will motivate her to bigger goals. She will eventually learn from experience that the world isn’t the utopia of her childhood, but I deeply hope that she will never fail to see love in the faces around her.

How do you help your children to understand and deal with difficult life experiences, like the loss of a loved one?

This is an original post to World Moms Network by Karen in Abu Dhabi, United Arab Emirates.

Karen is a Singaporean with an 8 year-old daughter who’s a little fire-cracker version of herself. She’s spent the last 15 years in her various roles as trailing spouse, home-maker and educator. Having experienced 5 international moves alternating between postings and her home country of Singapore, Karen considers herself a lover of diverse foods and culture, and reckons she qualifies as a semi-professional packer. She is deeply interested in intercultural and third-culture issues, and has grown immensely from her interactions with other World Mums.