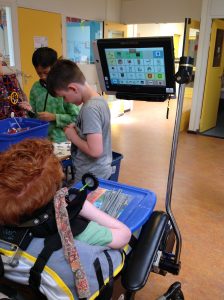 Although budget cuts mostly mean changes for the worst, sometimes they turn out to be a blessing in disguise.

At the start of the 90s the government had to cut down the costs of special education. I was learning to be a teacher, when a project named “Together To School Again” was a much talked about topic in the Dutch school system.
It was brought to us as “progress”, of course, and it was backed by all kinds of educational specialists, but received with a lot of resistance in teaching land. After all, WE were the ones executing the damn monstrosity.

The goal was to keep children with disabilities-in-the-broadest-sense (so, from hearing difficulties to behavioral problems) in normal schools as much as possible, with extra help from special education teachers/therapists, or remedial teachers, who then became full time class assistants. Another goal was to keep the classes small, 25 children max. Only the really difficult ones would go to special education schools.

I didn’t really get all that resistance from my (future) colleagues. I knew very well that this whole charade was not educational progress, but budget cuts, but I also felt that this could turn out okay. In fact, I believed it should be normal to have a society where we include all people, and an educational system that would work for all sorts of children: refugees who don’t speak the language, children from war zones, children who roll instead of walk, children who talk with their hands instead of their mouths, children with narrow boundaries and children with overly wide boundaries, well, you catch my drift. And mind you, ADHD was still a rare symptom, just like gluten allergy, and autism was “just” autism. And they were illnesses, causing behavioral problems in class.

Inclusive education has become the new norm, and the new normal. We have so much more, refined knowledge of and information about the abovementioned diseases (and the ones added since). We learn more and more that their symptoms might as well be the ways humanity adapts to different energies, different vibrations. Indigo children, crystal children, rainbow children, so many beautiful names. We begin to understand that in addition to the downsides of special needs kids, there are many plus sides too. Their creative thinking, their wisdom, the authenticity of these special kids is amazing and should not be restrained – it should be encouraged. We learn that being outside, playing in the dirt, playing in general, having enough physical exercise and a nutritious meal is key to a happy life and happy offspring. We learn that “not being normal” is actually quite normal.

The concept of inclusion is also being applied to special care facilities, like the one our son is attending, called “classroom on wheels”.

The founding father of this concept is Roeland Vollaard. Working as a physical therapist in a special care facility, and fostering a boy with severe disabilities during weekends and vacation periods, his dream of including his clients in the real world began. He got promoted to manager of an orthopedagogical daycare center for children aged 3 to 14, and met a mother who had a deep wish for her son to be around healthy kids. She noticed her son reacted totally different around her other kids than at the daycare center. They started an experiment at the school of her other children: her special kid attended classes with kids his own age, with help and care of personnel from the daycare center. Needless to say, the experiment worked out perfectly.

Children with severe multiple disabilities gain their support mostly in special facilities. There is hardly any contact with non-disabled peers. This is called segregation (right in the diagram).

Schooling happens in separate classrooms, but inside a “normal” school complex. Younger children attend a primary school; the older children join a high school. Working together with all parties means INCLUSION (bottom right). 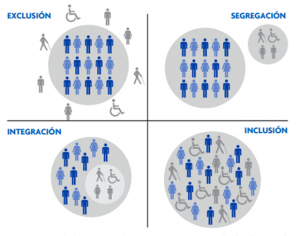 We kind of stumbled upon the opportunity to be part of this. We met when Roeland was still manager of the daycare center, due to our son’s physical problems (this was just after his accident and rehab). He went somewhere else, but was sick all the time, and we needed home support. Roeland applied. He came cycling 15 km to be at our place at 6.30 am, take care of our son so I could take care of our daughter, put him on the bus and cycle back, in all weather conditions, never too late, never too early. He probably saved us and gave us hope, when we had lost everything.

And then, when he started his Classroom on Wheels, our son was able to slide right in.

Making good use of interns and volunteers, sponsoring, low overhead costs, new technology that needs testing, and keeping a small paid employees list (but still being able to guarantee one-on-one supervision), the Classroom can provide the latest technology and know-how, the best equipment, excellent care, and a lot of love. And besides hanging out with their disabled friends, they go out for walks to the mall, the library, the park with their healthy pals, attend and give presentations, do art work together, listen to stories, have recess together. And though it was frightening for a lot of the “normal” children at school, now they got to know the Classroom kids, read to them, look into their eyes and know that deep inside, behind the frozen faces, inside these deformed bodies that are being denied to do what other kids take for granted, behind the spasms and the epilepsy and the goofy screams, that deep inside, there is a child yearning for respect, love, communication, interaction. To be really heard, to be really seen. Just like they do.
And besides that: what “normal” kid can say he’s got a wheel-chair-drivers-license, and an elevator-utility-using-permit, and a drool-wipe-diploma?
Inclusion works both ways……

The Classroom just celebrated its 5th year anniversary, and the benefits are really starting to show.
Not only on a personal level for all involved, but even the Ministry of Education has shown interest, as well as organizations surrounding special care children, because it is proof that cost reducing does not have to mean care reducing.

Luckily, our main man Roeland, is not a sell-out……..

Our son Fygo is linked to a 6th grade group. Together they made a presentation about the eye tracking computer he is learning to use. In technology class, they made an arm stand for him from K’nex. In world orientation class, he loves to listen to stories about other countries, other cultures, loves watching nature movies, especially about wild animals, they stimulate him to use his computer for the better, and HE DOES IT for them.
Until it is time for feeding, diaper changes, physical therapy, musical therapy, showering, resting. Then he goes back to the calm of his own classroom and the love of all the people working there.
He’s happy and thriving.

How privileged we are…….

I'm Coretta, a former teacher. I'm married, and the mother of an 18 year old son, a 9 year old daughter and a 10 year old son, and bonus mom and grandmomship. Our 10 year old son Fygo has brain damage due to near drowning and has no use over his body, except for his eyes and ears. He lives with us at home and visits a special school. We try to live "a normal live" as much as possible.