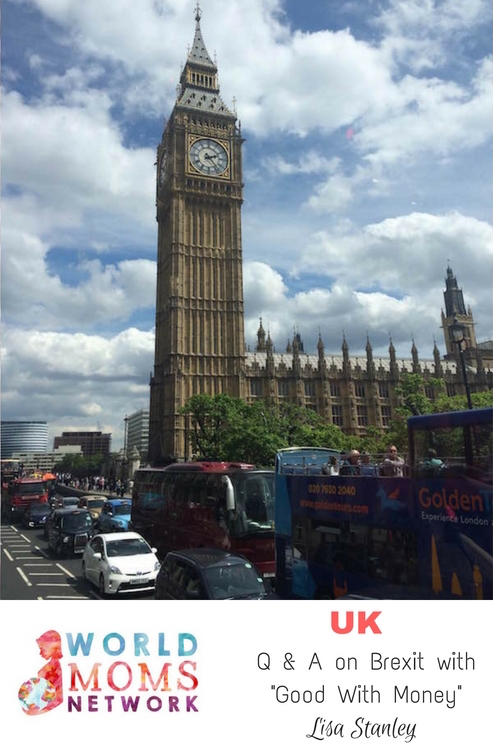 Brexit. The news is everywhere. How does this affect families in the UK and around the world? We called on our friends (literally, they are friends with Jen Burden’s sister-­in-­law!), “Good with Money” in Great Britain, a site launched by two moms who provide financial information and inspiration for families, to get their perspective from inside the UK!

What is Brexit (the short version!)?

Brexit. A week or so before the EU referendum I was in the playground with my youngest son. An elderly Chinese man looking after his grandson started up a conversation. I could just about understand his English. His comment was, basically,

“What on earth are you doing, Britain, holding a referendum on whether to leave the EU or not? Are you mad?’” Well, clearly, we are.

The UK woke up on the morning of 24 June, many of us in utter disbelief on realising 52 per cent of the country had voted to isolate our tiny island kingdom and leave the European Union. The EU currently has 28 member states, a combined population of more than 500 million, a combined GDP of more than US$18bn and an internal single market governed by its own laws. The UK joined the precursor of the EU, the European Economic Community, in 1973. So to answer the Chinese grandad, yes, we are mad, we held the referendum, and (gulp) we voted leave.

And, if that was not enough madness in itself, we’ve since seen the Prime Minister at the time, David Cameron (Remain), who called the Referendum somewhat as an election winner, resign. The two main Leave campaigners, Boris Johnson and Nigel Farage, also resign (from the resulting Conservative Party leader election race and as leader of the UK Independence Party respectively). The other key UK political party, Labour, remains in turmoil with a leader, Jeremy Corbyn, refusing to step down despite more than half of his ministers resigning just after the vote. AND…we’ve still not really heard a peep from the Greens or the Liberal Democrats (who led our coalition government between 2010 and 2015). The only person with any sense saying anything with any sense is the Governor of the Bank of England, Mark Carney, who is Canadian!! (Read our latest on that here.) And current Prime Minister Theresa May, who voted Remain, vows to follow the will of the people after the vote to Leave.

Leave or Remain, there is no averting the harsh lesson we are now getting in how that abstract and amorphous “economy” deeply affects our personal lives and society both close to home and further afield.

They say nothing is certain in life except death and taxes. Well, in the two weeks after the vote, I’d say that’s been proven, and one million times over. Previous certainties about jobs and the employment market, freedom of movement, house prices, household bills to loan rates and other personal finances have all been thrown upside down, topsy­turvy.

And one of the worst things is that some of those who are most likely to have voted Leave – the disaffected and disenfranchised – will now be among those most negatively affected by the country’s decision.

We will ALL be affected, and in far more subtle and profound ways than just how much our mortgage bill or rent goes up, as the impact of the financial crisis proved. Following the shock of 2008, higher house prices resulted in an increase in the age at which people get married and have children; the huge public deficit resulted in more people working into retirement and young people who can’t get jobs have to live with their parents for longer. More of the same again cannot be ruled out.

Despite the crazy turmoil at Westminster and in the City of London, a lot of clever people are working out how to protect us from Brexit’s illest effects. Lower interest rates and money printing are on the cards. These strategies might be a recipe for ever­living debts and poor retirements, but they will buy us time.

What are the top 3 effects on the world economy after the Brexit vote to leave the EU?

The effect on the UK economy has been, understandably, pretty pronounced. There are apparently 700,000 fewer jobs advertised in Britain since the Leave vote. Across the globe, too, markets were rocked and currencies in freefall, although they have since recovered.

Almost two weeks after the vote, the British Pound had hit another 31 year low, and it still remains well below its pre-Brexit value over one month later. There is talk of it reaching parity with the US Dollar before the end of the year. Good news for tourists visiting the UK, but not, generally, for many others.

Meanwhile, inflation, made worse by the falling Pound making imports more pricey, looks set to increase. But by how much? A few spikes notwithstanding, inflation has been fairly low for a number of years. Now, economists predict it could more than double before the end of the year, rising to as much as 4 per cent next year.

In the UK we import 60 per cent of our goods ­- that’s a lot, hey? So what do we do if our EU or even global trade agreements are not (re)negotiated fairly? That’s a lot of stuff to miss if our friends in Europe no longer choose to sell it to us ­ at favourable rates. Say au revoir to affordable Mozzarella, Balsamic vinegar, Feta cheese… blimey, this could even spell the death of our beloved Prosecco habit!

The GBP has seen a devaluation. What are some of the challenges this presents for families in the UK and abroad?

As soon as the Leave vote was announced, the British Pound slumped to its lowest level against the US dollar in 31 years. Almost two weeks later, it fell yet further, to new 31 year lows. It has also tumbled against the Euro. Despite a growing chorus of positive voices, this still makes for pretty hard reading.

It means British families with holidays booked to Europe, the US, or even elsewhere, are going to find it pretty tough going, financially.

With the Pound worth less than it was a month ago, everything is going to seem almost unstomachably expensive. So, those Brits who’ve yet to book a holiday will most likely see the summer of 2016 as their Staycation year, keeping the money closer to home. UK resorts should do well from British travellers, and they should also do well from an influx of visitors from around the world making the most of a cheap Pound.

More worryingly, perhaps, the 4.5m British families living and working overseas (with 1.4m in the EU according to the UN) are in limbo, wondering for how long they will be able to stay, and suddenly finding everything significantly more pricey.

While some in the Leave camp argued prior to the vote that Britain would be able to carve out a fuller role in foreign aid outside of the EU and would be able to develop broader international political alliances, such as with former Commonwealth countries, there’s still scant evidence emerging that this will be the case. (Frankly, there’s little evidence of anything emerging, on any future matters at all, eeek!) In fact, a number of leading names in international aid such as Oxfam, WWF, Christian Aid, ActionAid and Save the Children, signed a letter pre Brexit stating their view that only by remaining in the EU can Britain extend its reach and influence when tackling global humanitarian crises such as Syria, Middle East and north Africa.

Britain currently spends 0.7 per cent of gross national income on foreign aid, with the official budget rising to £12.2bn. The signatories of the letter said: “Every pound of aid the UK spends through EU institutions is matched by £6 from other member states. This larger pool delivers better lives for the poorest people. It also helps tackle problems in areas where the UK has no large presence. EU aid complements activities that other aid agencies cannot undertake, like police and security missions in fragile hotspots.”

So, much as those Brits living and working abroad are likely to suffer, people from developing countries who work in the UK will also be hit, as the value of what they have to send home falls further.

Will the UK’s exit from the UK make it more difficult for EU members to work in Britain and vice versa?

The jury’s still out on whether it will be more difficult for people from EU member states to work in Britain and Brits to continue working across the EU. Although I am very happy in Britain (even if it still feels a bit like a rather rudderless, possibly sinking, ship at the minute). I did find myself embracing my Irish roots (my mother is Irish) when I woke up on 24 June, the thought of wanting my kids to have the same European freedom of movement I’ve been lucky enough to have, if they so wish. I heard a rumour they’ve shut the Irish passport office though, so too late for me!

What is your top practical financial advice for families everywhere?

You could also check out our Positive, Practical and Principles Good with Money tips to get your family finances back on track post­-Brexit.

For more on the financial effects of Brexit and more, Lisa and Becky can be found providing financial tips for families in the UK at Good with Money.

This is a guest post to World Moms Network by Lisa Stanley in the UK of Good with Money. (Thank you, Lisa!)
Photo credit to Jennifer Burden.