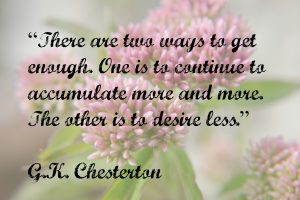 It’s now April and without really meaning to, I’ve found that in the first three months of the year I’ve not bought myself any clothes or shoes. Now this might seem like a small thing to many people, but sadly where I live in the UK it is very common place to constantly be buying new things – clothes, jewellery, items for the house, cars, gadgets and frankly any sort of status symbol.

Over the last decade I’ve become more and more concerned about the disposable world we live in, the one where we teach our children that as soon as a sock has a hole in it, you throw it away and buy new ones. Of course some of the problem is that in places like England socks can be bought very cheaply now, perhaps five pairs for just £2.00. But at what expense are we buying those socks? How much did the worker in a far off country earn whilst making those socks? A good living wage? Almost certainly not.

Every action we take when it comes to buying ‘things’ or accumulating ‘stuff’ has an impact, not only on those people who are actually involved in the production phase but also on the cost of delivering the stuff from one country to another and delivering it to the end customer. Almost everything we buy has a carbon footprint. I can’t even start to pretend that I am any kind of expert in this area, but I am slowly realising that it is not enough to just be an advocate for an end to extreme poverty. If I want to see that happen I have to also be an advocate for an end to the use of fossil fuels.

A few months ago, Amnesty International and Greenpeace issued a joint statement to the 195 countries meeting together to discuss climate change at the COP21 Sustainable Innovation Forum in Paris. The statement linked global temperature rises with human rights. They stated that an additional 600 million people could face hunger by 2080 due to climate change. What a terrifying thought and completely in opposition to where the situation should be heading.

Thankfully a few days later, the world’s governments signed an agreement to reduce net carbon emissions to 0% by 2050, thus signalling an end to the fossil fuel age. Of course change is not as easy as some officials signing a treaty: there is much hard work to be done and Joe Average, like you and I, has to play a part. So I beg you, starting now, will you please consider if you really need that new blender? Do you have to trade in your BBQ for the self-cleaning one that is just one step up? Or could your old one last you a few more years?

I’m certainly adopting the attitude of ‘take me as I am’ this year and if someone comes round my house and feels that my TV is old fashioned and perhaps a little squeaky, well so be it. We won’t be buying a new one until this one really is past its best and can’t be fixed. It’s far too easy to get caught up in the competitive rat race, the one that says you must have a big smart car, holidays abroad and a well thought-out wardrobe, to be seen as successful.

In contrast, some of the most successful people I have known over the years have been those with no great dress sense, who have had a messy house and a clapped-out old banger of a car. Success is about the person, not their belongings. It is the mother whose four adult children are all thriving and giving back to society in various ways. It is the retired man who goes out and works with street kids to ensure that they stay away from drugs. It is the passer-by in the street who smiles at everyone and takes time to talk to those she knows are lonely.

Those are the people I want to celebrate and to join. I don’t need lots of new things, I just need a heart full of love and by the grace of God I can share that with everyone I meet. Will you join me?

What role do material things play in your life? Are you concerned for the world your children are growing up in?

This is an original post written by blogger Michelle Pannell for World Moms Blog. Photo credit to the author.