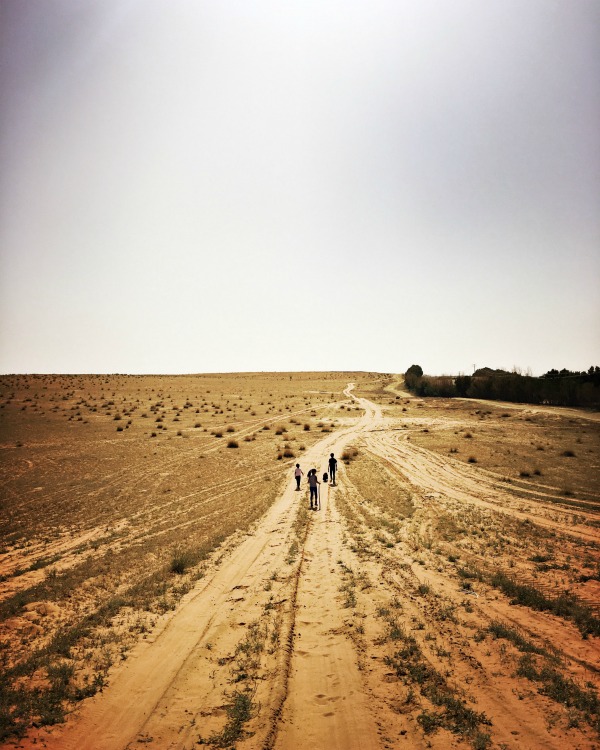 Mama B’s 3 children and dog, Camden, on a stroll in the Saudi Arabian desert.

It occurred to me the other day that I have never talked to my children about terrorism. I actively try to make sure they don’t see the news or hear me talking about the world we are smack in the middle of. So I wanted to know what they knew, as a 13-year old and a 10-year old, about terrorism.

Below is the transcript of the conversation I had with my children a few days ago. To give you a little bit of background my son has moved this year to an international school with children from all over the world. So while being older he is also exposed to a lot of nationalities including Americans. My daughter goes to a Saudi school and is exposed to many Arab nationalities.

A Conversation on Terrorism with My Sons

Me: Who are the terrorists?

S: Da’ish (ISIS). They are people who claim to be muslims and to be killing ‘B’Ism Allah’ (in the name of God) but they’re just murderers.

J: Like in France they say, “I’m muslim! I’m muslim!”, and start killing people and now everybody hates us.

Me: Do you really think everybody hates us?

Me: Why do you think the Americans hate us?

J: Because they are voting to kick the muslims out of America, and they won’t let us in if we go. I saw it on the news. (Apparently, I am not doing as good a job of keeping them away from the news or hearing about the news, as I thought.)

Me: Do you think all Americans feel that way?

Me: You know, saying that all Americans hate us is like an American saying all Muslims hate them.

Me: Don’t believe everything you hear. The loudest voices are usually the ones saying the most controversial and hateful things. Good news hardly ever makes the news. You’ll never see a piece about how people are getting along and how the majority of the world wants to just live in peace.

(He is referring to the viral video of a man standing blindfolded in the middle of the street with a sign saying something along the lines of “I am a muslim, and I trust you. If you trust me, hug me” It was a very touching clip as so many people hugged him that day).

J: I worry mama that if we meet people and we get to know them and we liked each other but they didn’t know we were actually muslim then we tell them I feel like they won’t like us that much or something bad will happen… But what I’m most scared of is you know how they say they are muslim and they kill people? What if they do it to us?

S: The most people the terrorists are killing are muslims!

J: I don’t want to talk about this anymore.

I didn’t realise they thought of all of this, any of this, at all. Here, in Saudi, as is the case in most of the Arab world, we eat sleep and breath politics and news. It’s hard not to when it is happening all around you, live and direct, in your time zone and within earshot. So I really shouldn’t be surprised at all when my children are exposed to it.

Events of terrorism are causing so much confusion as my children cannot marry what these people are doing in the name of their religion to what their religion is actually teaching them.

Now they have to understand a world where the image of their faith is so twisted it no longer resembles anything they have learned or seen around them. And understand that they may be judged, and, yes, hated, by some people because of it.

My Own Childhood Experience

At the age of 12 in a camp in Vermont I got asked if I had an oil well in my backyard, if we rode camels, and if we lived in tents. I said yes to all of those questions because it was funny. And I explained that in modern days now we live in two story tents. Everyone laughed.

Later that day at camp, one of the girls asked me in the bathroom if it was true that we cut off the genitals of men who rape women. She said she hoped it was true as her sister got raped, and she wished someone would have cut off his genitals. Pop went my little bubble right then and there. I remember hoping it was true. I, in fact, had no idea if it was or wasn’t. (It isn’t in case you are wondering).

In University, despite the fact that I was a Saudi young woman living in London and studying graphic design, when I got engaged I still got asked by one of my professors if I was forced to. Because I am an Arab woman they decided I must be an oppressed woman.

Generally, I grew up with people thinking I was filthy rich, oppressed, or backwards. But I never had people fearing me or hating me because of my religion. The stereotypes that my children deal with today are different and religious based.

As is the way of the world — the masses get punished for the deeds of the few. I see my little children, and myself, as ambassadors for our religion and our country. But I do resent the fact that my 10-year old daughter thinks that telling people her religion will make them hate her.

Have you had to talk to your kids about terrorism? Have you ever been discriminated against because of your religion?

This is an original post to World Moms Blog by World Mom, Mama B., of Saudi Arabia.