Lack of sanitation. Universal education. Poverty. Global Health. How is it possible to introduce a group of 70 kids about some of the world’s largest problems and how to solve them in one night — plus make it fun?

To start, the idea of connecting the girls with what problems to be solved came from this viral Google quote I found in my Facebook feed one day: 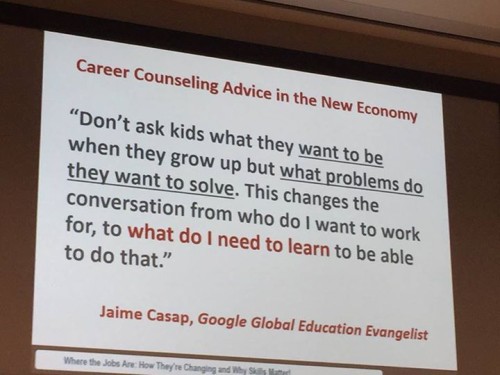 “Don’t ask kids what they want to be when they grow up but what problems do they want to solve.” YES!! In order to inspire future problem solvers, we needed to find some problems. And it’s actually not difficult to find the world’s most pressing problems — there’s a list! 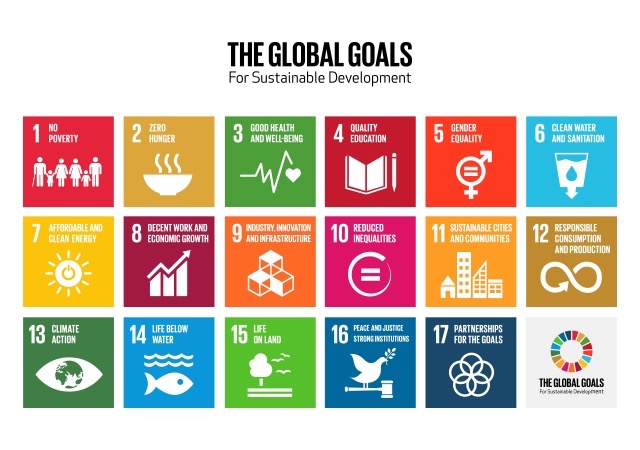 We ran straight to the United Nation’s  Sustainable Development Goals (SDGs), which are the 17 global goals world leaders set out to achieve to help eradicate poverty and make the planet a better place. And With Girl Scouts that ranged in age from 5-years old to high school teenagers, we needed presentations and activities incorporating some of the goals which would keep their wide range of interests and attention spans!

We chose to introduce the girls to the concepts of SDGs 1-6: no poverty, no hunger, good health, quality education, gender equality and clean water and sanitation with the help of Save the Children, WaterAID and a kit purchased from Sole Hope.

On the day, 70 girls rotated through four World Thinking Day stations. Two stations were “presentation” stations and two were “maker” stations, where the girls would be hands-on. Upon arrival, we had tables set up in the center of the room for the girls to convene with their troops and have a snack. They also received their schedules of what station their troop would visit and in what order. Before beginning the rotations, we started the meeting with the Pledge of Allegiance and the Girl Scout Promise. Then, they were off!

We invited Save the Children and WaterAID to the event to present to the girls. Each brought a slide presentation and projector, and their enthusiasm for the work they do was relevant in how fantastically they engaged with the girls. They were introduced to how global nonprofits were applying solutions to solve some of the world’s biggest problems. 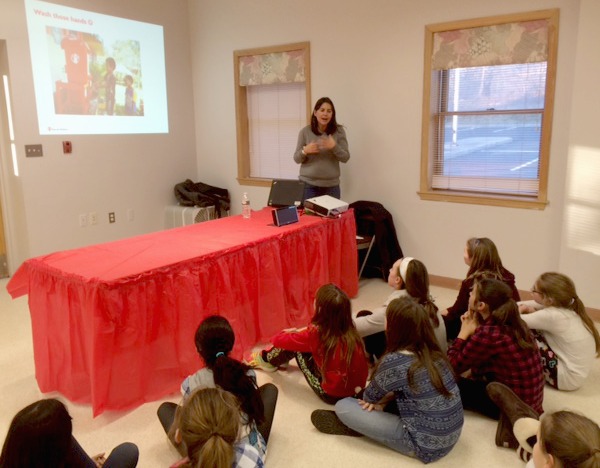 Carmen from Save the Children educating a troop of Cadettes about their programs worldwide that are making a difference in the lives of children.

In 2014 Save the Children helped over 160 million children worldwide! Being kids themselves, the really related to helping children and the photos of seeing the organization in action were engaging.

“It was cool because you can also help one kid who needs help at Save the Children.” — Sophie, Brownie (on sponsorship)

At the WaterAID station, the girls had the opportunity to line up and try to carry a jerry can half full of water and imagine what it would be like if they had to carry that can to fetch water for their family. They also learned how over 1 billion people do not have access to a toilet on the planet! 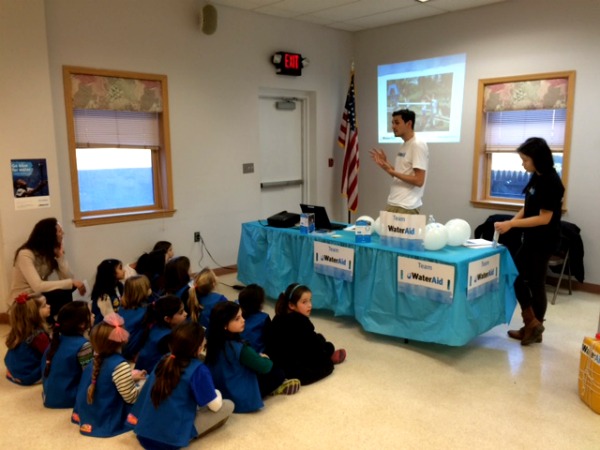 Manuel and Merry from WaterAID presenting to a Daisy Troop about how their organization helps communities gain access to clean water.

WaterAID explained why clean water is important to prevent disease and how so many people around the world lack access to it. They introduced the girls to ways in which their organization is making an impact in creating access to clean water in different countries. 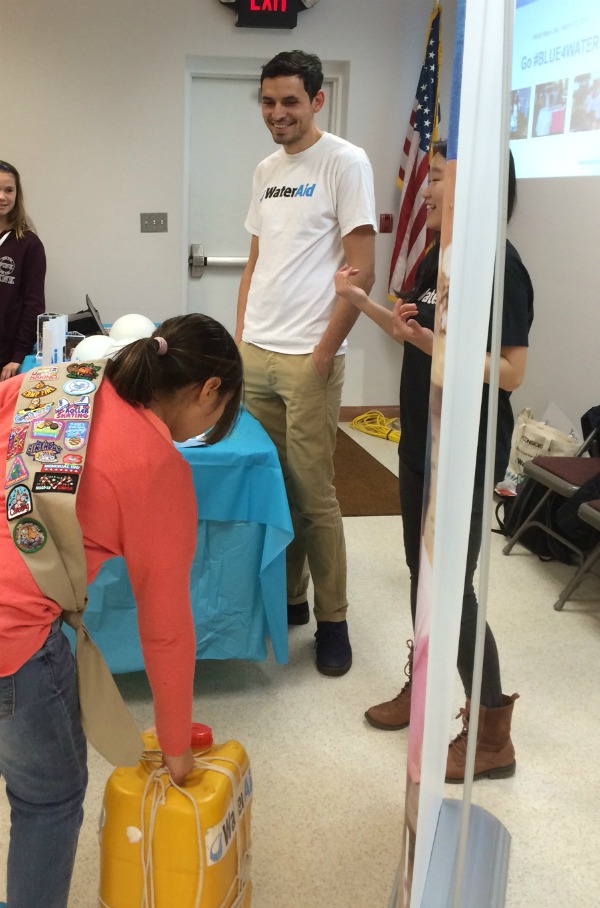 A Girl Scout Cadette attempts lifting a jerry can half filled with water at the WaterAID station for World Thinking Day. These containers are a way in which some children around the world fetch for waters for their families.

“I was surprised how heavy the yellow container was, and it was only half filled. How do kids carry that?” — Sophie, Brownie

World Mom and Anti-poverty mom, Cindy Levin, introduced me to Sole Hope, an organization whose goal is to provide shoes to children who need them most to prevent infection. I ordered a party kit online, and we asked the troops for donations of denim. At the station, the girls learned about how going barefoot can lead to painful foot parasites in some places on the globe. They cut patterns out of the old jeans and plastic that would be made into shoes for children in Uganda. 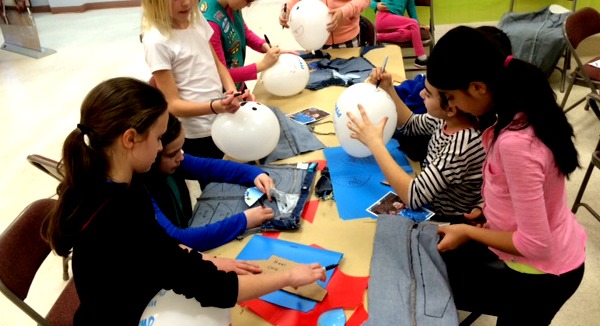 A Girl Scout Junior troop measures out patterns for cutting out shoes for children in Uganda out of recycled denim and plastic.

We also showed the girls photos of what the finished products would look like.

“I loved helping to make the shoes. They are so cute!” — Brownie, Ally

What’s a Girl Scout event without making SWAPS? SWAPS are an old tradition of exchanging keepsakes among fellow Girl Scouts met while traveling. The acronym stands for “Special Whatchamacallits Affectionately Pinned Somewhere.” The girls were led in making keepsakes to commemorate World Thinking Day 2016. Their SWAPS included gold and silver puzzle pieces to commemorate connecting with friends, as the lyrics go:

“Make new friends, but keep the old. One is silver and the other’s gold!” 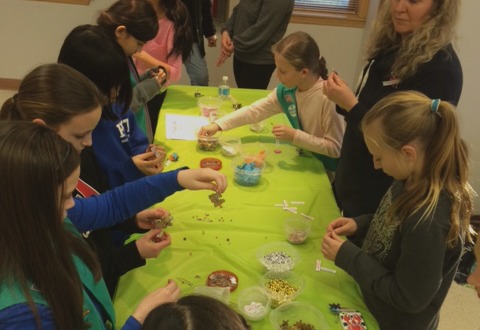 It was so fun to intertwine the UN’s global goals for the planet into the Girl Scouts’ World Thinking Day. We were able to introduce over 70 girls to problems that children like themselves face around the world and they had the opportunity to meet some of the change makers that are providing solutions on the global stage — we definitely gave the girls something to think about!

(After all was said and done, our town’s Girl Scouts had some money left over from the event that they chose to donate to both, Save the Children and WaterAID, too!)

Do you have a Girl Scout or Girl Guide who participated in World Thinking Day this year? Let us know what they did to commemorate the day!

This is an original post to World Moms Blog by World Mom, Jennifer Burden, who is the founder and CEO of World Moms Blog. *Special thanks to Leaders, Janice Petretti and Heather Behal who also helped plan the event!