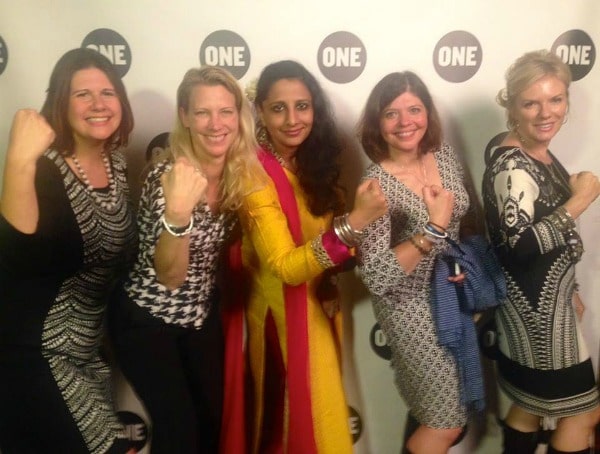 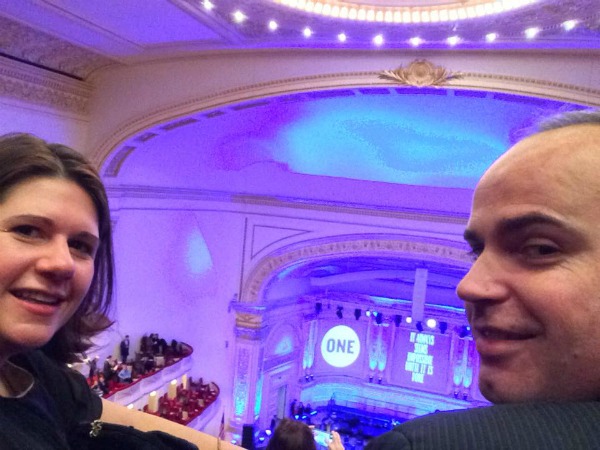 This past December, I accepted an invitation from the ONE Campaign to meet at Carnegie Hall for World AIDS Day, and Bono and the Edge would be playing. It was an event for some of their most active anti-poverty advocates.

I met my husband that evening in New York City, where he was working, and we headed to Carnegie Hall. We grabbed a drink and socialized before heading to our seats. I had received my first U2 CD as a gift for my 13th birthday from my childhood friend, Stephanie, and I’ve been a fan ever since.

There was no doubt that Bono was amazing on stage that night. The entire show was one of the best I’ve ever been to — The Edge, Jessie J, Hozier, Miley Cyrus and the Kinshasa Symphony from the Democratic Republic of the Condo all performed. President Bill Clinton, Vice President Joe Biden, Stephen Colbert and Sting were also there to talk about ending poverty and eradicating the worldwide AIDS epidemic. Host of the Daily Show, Trevor Noah, Mcd the evening. They were all amazing. 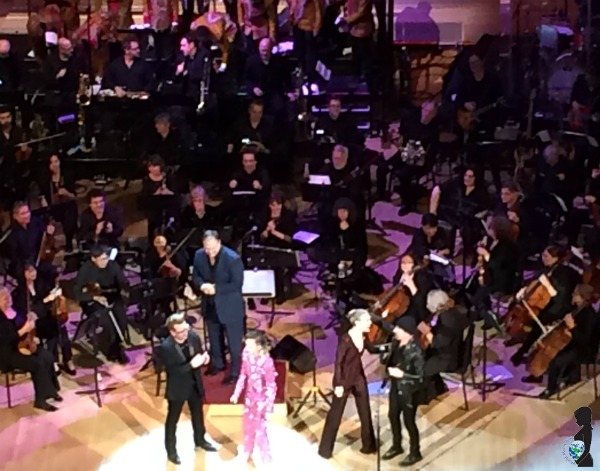 Bono, Miley Cyrus, Jessie J and Hozier perform at the ONE event for World AIDS Day in NYC December, 2015.

Stephen Colbert recognized two activists who were, as he thought, Hispanic, and he apologized in advance for botching their names. He then proceeded to thank a Mr. and Mrs. Gates, or as he pronounced it, “Gahtays”. Colbert always brings the funny.

The RED Campaign unveiled a larger product line where proceeds go to the Global Fund to help eliminate AIDS in Africa. The message of the night of the importance to eradicate AIDS was profound. But, what was different about this concert was the atmosphere of the everyday people sitting among us, many of whom Bono has inspired to advocacy.

Prior to the show starting, we met a woman who runs a ONE chapter at a New Jersey university along with her husband. She and her husband had been big U2 fans, which fueled their interest in becoming ONE Campaign leaders at the university. Her husband couldn’t make the event, so her 9-year old daughter joined her at the concert. How lucky for her young, impressionable ears to experience the messaging and music which was about to unfold. It was interesting to me to see how U2 fans had followed Bono’s lead by organizing and inspiring students to join the campaign to end poverty.

Once we grabbed our seats, I met another woman in my row who had worked in a record store for 17 years and now works in admissions at a New York City museum. She was also a diehard fan of Bono and U2, and had become equally diehard about ending poverty as an activist with the ONE Campaign.

After the show, I caught up with journalist and activist, Kristi York Wooten, who is as passionate about ending poverty as she is about music. It is no surprise, she is also a powerful activist for the ONE Campaign. Following the event, she wrote an article for The Huffington Post entitled “Can Mily Cyrus Educate Millennials about the Fight Against AIDS?“. She says,

“These statistics [about the growth of AIDS worldwide] should also be a rallying call to artists such as Cyrus, Hozier and Jessie J, who are already involved in fighting AIDS: make your voices louder and take cues from the generation of musicians who came before. At Carnegie Hall, Cyrus told the audience she hoped to see the end of AIDS in her lifetime. I hope she works toward that goal with us, because music still has an important role to play in this battle!”

Kristi hit the nail on the head. Music does still have an important role to play in activism. What is most compelling is Bono’s ability to go beyond the lyrics of his songs and to create a path for his listeners to take action to help people living in extreme poverty. He has worked with top people in the field to create a way in which people like you and me can be involved. Worldwide activists write letters to their governments, tweet, lobby, deliver petitions, you name it, in support of eradicating poverty. 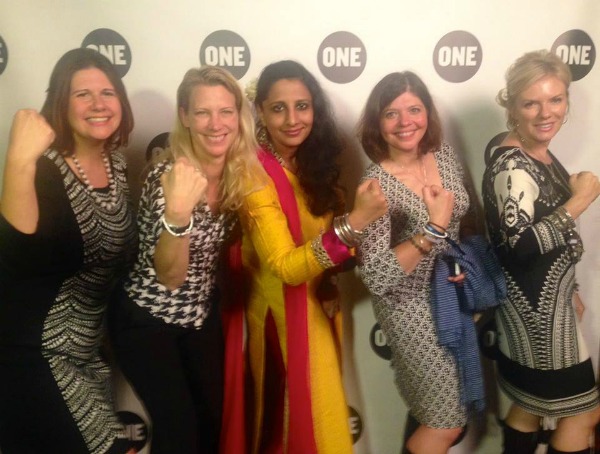 World Moms pose for a “Strengthie” with Neha Misra of Solar Sisters at a ONE Event in NYC in September, 2015.

The concert was incredible, but if I had to go back and do the night all over again, I’d take more chances to get to know the stories of more people in the seats and how Bono and music had inspired them to activism. We were all joined in feeling Bono’s impactful words:

“There is no first world or third world. There is only one world.”

I quickly pulled out my phone to tweet out that beautiful quote, and then got reprimanded by an usher. The tweet would have to wait until after the show. I am so used to being completely tuned in to social media at events, I had to give myself permission to just sit back and enjoy the show.

I was grateful to.

This is an original post to World Moms Blog by CEO and Founder, Jennifer Burden, of New Jersey, USA.