Each year on December 10, people all around the world celebrate Human Rights Day.

The date was chosen to honor the United Nations General Assembly‘s adoption on 10 December 1948 of the Universal Declaration of Human Rights (UDHR), the first global statement of international human rights principles.

The “Our Rights. Our Freedoms. Always.” 50th anniversary campaign will highlight the theme of rights and freedoms — freedom of speech, freedom of worship, freedom from want, and freedom from fear — which underpin the International Bill of Human Rights are as relevant today as they were when the Covenants were adopted 50 years ago.

We have a tradition at World Moms Blog of celebrating Human Rights Day by sharing ideas for simple yet meaningful ways that families can learn about the rights and responsibilities that we all share as human beings.

For more ideas, check out our past Human Rights Day posts:

Human Rights Activities To Do With Your Kids (2013)

Human Rights Activities To Do With Your Kids (2014). 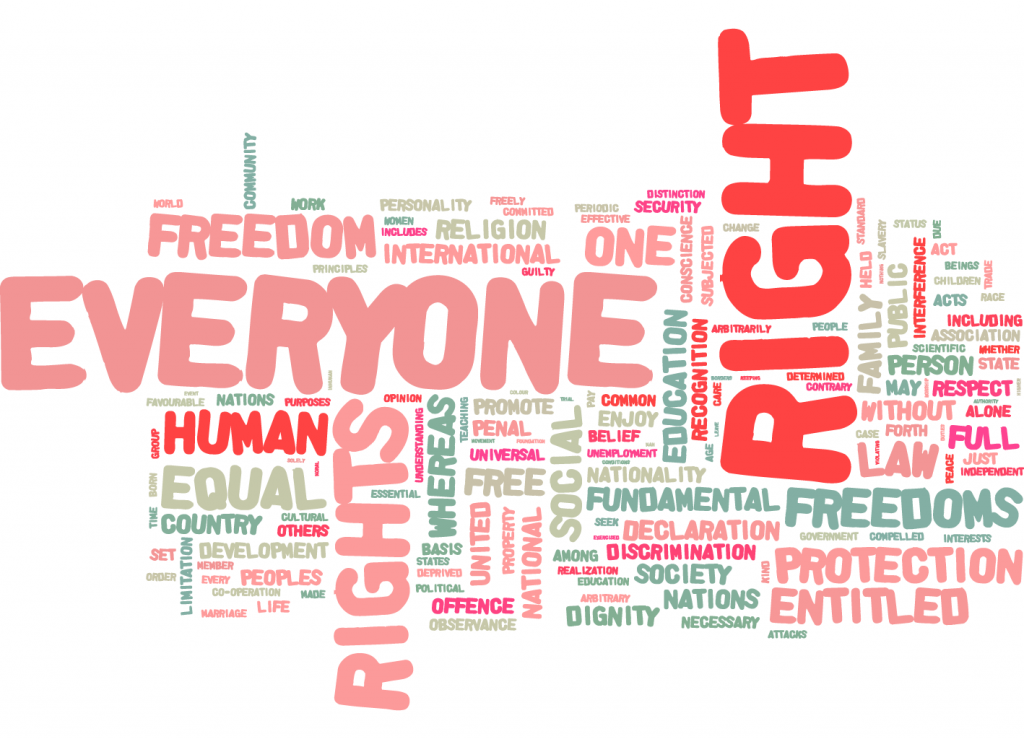 The UDHR in a word cloud. From Article 26 website.

Families can join the UNICEF Kid Power Team by purchasing a UNICEF Kid Power Band—available at Target—and downloading the free companion UNICEF Kid Power App. Kids go on missions to learn about new cultures and earn points by getting active. Points unlock funding from partners, parents and fans, and funds are used by UNICEF to deliver lifesaving packets of therapeutic food to real, severely malnourished children around the world. In the pilot project earlier this year, more than 11,300 kids in Boston, Dallas and New York joined the UNICEF Kid Power Team and took enough steps to walk around the world more than 23 times. These kids earned enough Kid Power Points to unlock 188,850 therapeutic food packets, enough to save the lives of 1,259 children.

3. Stand up for the rights of girls everywhere. Girl UP, the United Nations Foundation’s adolescent girl campaign, engages girls to take action. Girl UP’s current advocacy priority is improving access to quality education for girls worldwide, especially those in vulnerable settings. Worldwide, 140 million children are not in school – more than half are girls. Learn more about the impact of education of girls on society here. Learn about ways you can advocate (no matter your age) here.

4. Sing your own song! Amandla! is a song that was a sung by Black South Africans during apartheid to give them strength. Amandla is a Zulu and Xhosa word meaning “power”. It was also the name of a documentary about the role of music in apartheid South Africa that won multiple awards at Sundance in 2003. The chorus is:

The band UB40, which strongly advocated against apartheid in the 1980s, did a popular cover of the song Amandla!

Amnesty International created a full lesson plan around the song. Check out the full lesson, which encourages kids to sing along with the song. Take out specific words and have your kids fill in the blanks. Kids have such a great sense of justice that their words may surprise you! Then have your kids draw the images that the song evokes and present their art projects to others.

(Fun fact: Amandla Stenberg, who played Rue in The Hunger Games, was named for the word and its meaning.)

5. Play Rights of the Child Pictionary. Based on the game Pictionary, each child sketches his or her interpretation of one article of the Convention on the Rights of the Child. When all are done, you can take turns examining the sketch and guessing the article it represents. For this and other ideas for teaching children’s rights through art, click here.

6. Play Human Rights Musical Chairs. This lesson developed by The Advocates for Human Rights is game similar to musical chairs, with a writing and/or drawing twist. Select magazine and newspaper images that you feel effectively demonstrate a particular article of one of the 30 articles of the UDHR. For example, if the picture shows a scene where a group of children, boys and girls, are happy and walking with backpacks on their way to school, you could discuss Article 26 the “Right to Education” and Article 2 “Freedom from Discrimination” as both girls and boys are attending school.

7. Learn more about famous and not-so-famous human rights heroes. There are many great biographies of famous activists (I Am Malala is one you may enjoy) but there are also many other inspiring peace and social justice activists to learn about.
Better World Heroes is an informational website which includes the biographies of 1000 heroes who have fought to build a better world.

The Giraffe Heroes project tells the stories of “Giraffe Heroes” – people who stick their necks out for the common good.

8. Read Dr. Seuss’ The Sneetches as part of an anti-racism, anti-bullying activity. Teaching Tolerance has developed a great simulation activity. The simulation exercise can help children understand the emotional impact of unfair practices. The follow-up activity on discrimination helps ensure that students understand that the goal is to change those practices, not the characteristics that make us different from one another. Check out all of Teaching Tolerance’s resources here.

9. Take a test together. The Representation Project has developed two quizzes to examine how mainstream media shapes our beliefs and practices about women and girls, as well as what it means to be a man. For families with preteens and teens who are interested starting a conversation about this issue, the Representation Project’s family resources can be found here.

#TheRepTest is a media literacy tool, sparking conversation about overall representation in film, television, and video games and encouraging more diversity in the entertainment industry.

10. Have a conversation with your family about what it means to be “free and equal”. Watch this video with your kids and discuss their reactions.

What else does it mean to be “free and equal”? the United Nations recently launched a new campaign called “Free & Equal” for lesbian, gay, bisexual and transgender equality. There are fact sheets, information about a film series, and much more on the Free & Equal website. You can even check out the very first Bollywood video for gay rights. The UN is asking that you share if you believe everyone should be welcomed into their family’s hearts, regardless of their sexual orientation.

The 2015 “Faces” video from the Free & Equal campaign celebrates the contributions that millions of lesbian, gay, bisexual, transgender and intersex people make to families and local communities around the world. The cast features “real people” (not actors), filmed in their workplaces and homes — among them, a firefighter, a police officer, a teacher, an electrician, a doctor and a volunteer, as well as prominent straight ally and UN Secretary-General Ban Ki-moon. Can you see past the label?

If you are not sure how to talk to your kids about LGBT issues, check out these Human Rights Campaign resources that provide the language and information needed to discuss lesbian, gay, bisexual and transgender people and issues in an age appropriate way with children and youth.

I hope you and your families have a great Human Rights Day 2015! If you have other ideas for human rights activities, please share them with us!

What are your ideas?

This is an original post for World Moms Blog by Jennifer Prestholdt who also writes at HumanRightsWarrior.com.