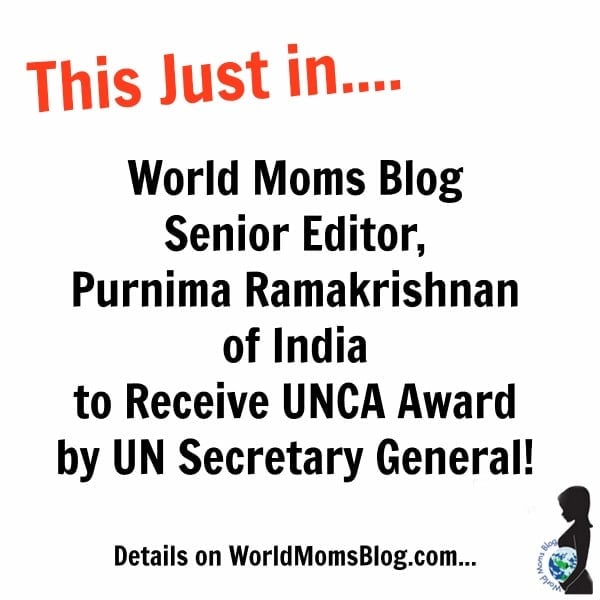 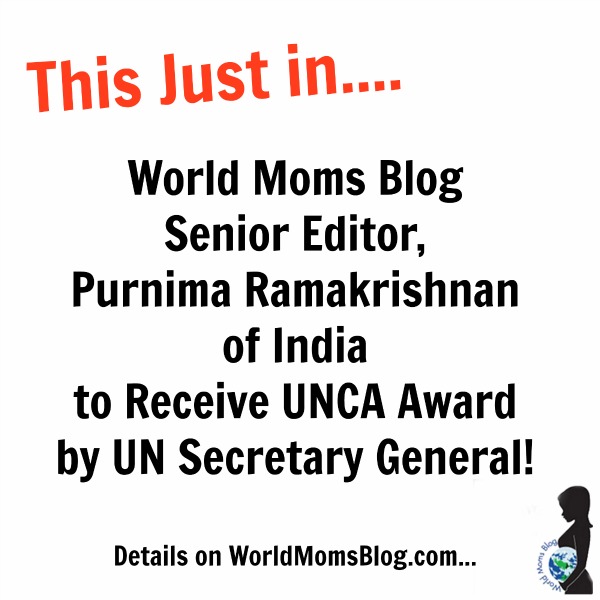 It is with great honor that we announce that World Moms Blog’s Senior Editor, Purnima Ramakrishnan, has been awarded an Elizabeth Neuffer Memorial prize for print and online coverage of the United Nations and UN Agencies.

Purnima is the joint winner of the Bronze award, which will be awarded at the United Nations Correspondents Association’s (UNCA) gala in New York City on December 14th, 2015 by the guest of honor, U.N. Secretary-General Ban Ki-moon.

As an active Senior Editor for World Moms Blog since 2011, Purnima’s posts include celebrating Day of the Girl in India through murals, her response to the Peshawar attacks in 2014, and speaking out after the Nepal Earthquake this year. Previously, she has also written about unwanted girl children in India, the Brazilian health care system, and breaking the caste system in India. You can find all of her posts at World Moms Blog on Purnima Ramakrishnan’s author page. 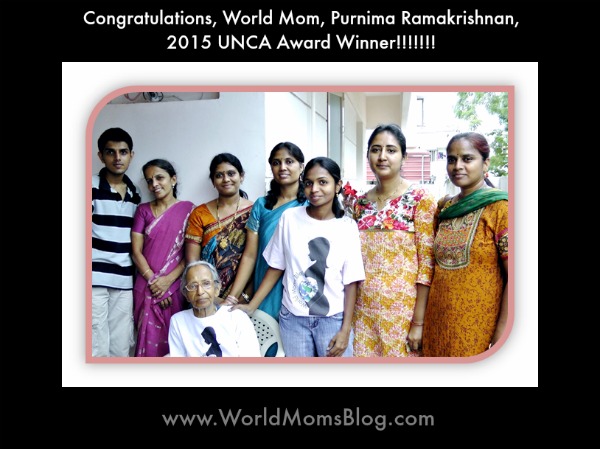 In addition to her work at World Moms Blog, she reported on poverty issues facing Brazil in her fellowship with The International Reporting Project. In 2013 she was a BlogHer International Activist Scholarship winner and travelled to Chicago, USA to speak on her advocacy for vaccines for children in the developing world. At the BlogHer conference she launched World Moms Blog’s successful 8 month #Moms4MDGs campaign to raise awareness for poverty issues around the world. Purnima has also been featured on The Gates Foundation’s Impatient Optimists blog, the UN Foundation’s Shot@Life blog, The Huffington Post and on Baby Center’s Mission Motherhood™.

“The dinner will be attended by U.N. officials, diplomats, Hollywood celebrities, corporate and cultural organizations and journalists from around the world,” according to the official award notice. We are currently (and excitedly!) coordinating arrangements with the hope that Purnima will be able to travel from India to New York City to accept this prestigious award in person.

It is also with a flood of emotions that we learned about the life of Elizabeth Neuffer, the woman for whom the UNCA award was named. Elizabeth Neuffer was The Boston Globe bureau chief at the U.N., who died in a car crash at the age of 46 while covering postwar Iraq in 2003.

An award winning journalist, she was the first to report that indicted war criminals remained in power in post-war Bosnia, where she spent a year reporting on war crimes.  Early on in her career, she reported from federal court in Boston, Capitol Hill during the Clinton Administration, Moscow during the break up of the Soviet Union and the Middle East during the Gulf War. She then became European Bureau Chief from 1994-1998 in Berlin. Elizabeth also dispatched to Africa to report on the 1996 return of Hutu refugees from Zaire to their native Rwanda.

Learning about the life of Elizabeth Neuffer reminds, us, at World Moms Blog that there is so much work left unfinished when it comes to reporting on human rights and justice in the world. We will gladly carry a small spark from the large torch she lit by the example of her leading reporting. It is an honor for Purnima to receive this award as an Senior Editor for World Moms Blog. Congratulations to Purnima Ramakrishnan and the entire World Moms Blog team!  We will continue to work hard to provide a voice for women around the world and speak up for those who need us most.

Thank you to the UNCA Awards Selection Committee for their selection and congratulations to all UNCA award winners!

For more on the UNCA. 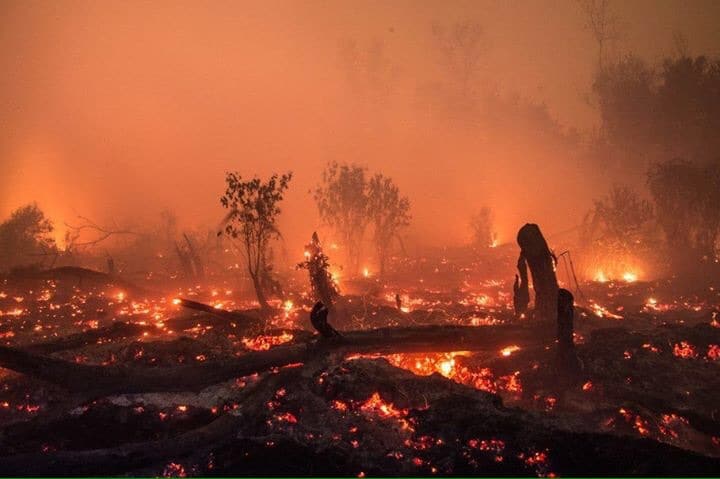 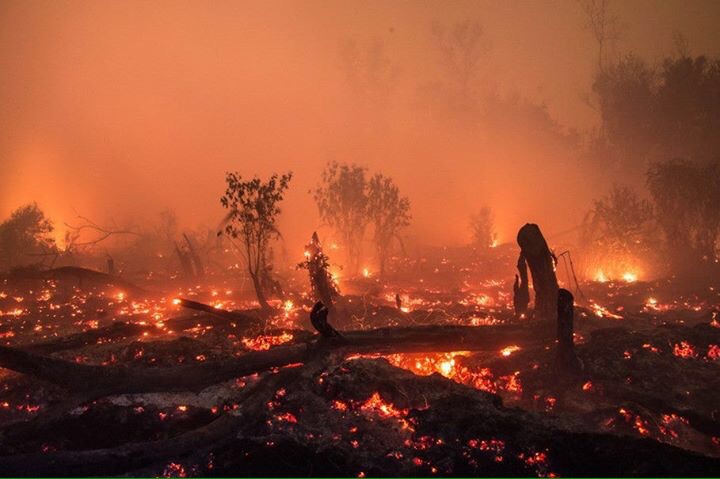 With the beginning of the rainy season here in Indonesia, the rain is welcome for all of us, especially for those affected by the forest fires spreading in Sumatra and Kalimantan.

Every rain drop brought hope that the fire will be tamed. The difficulties of taming the fire especially in Borneo is also caused by the natural landscape of the forest. Mostly peat land, the fire would still burn under the ground long after the initial fire has been put out.

Writing about this topic has been hard because, as a mother, I am outraged by human greed that allowed this to happen in the first place, and it has been going on for years on end.

Part of me wants to shout – when will this stop? Until we have no more trees or until all our children died from inhaling toxic smokes?

Friends in Singapore and Malaysia are also affected by the fire. The haze reportedly traveled as far as to Thailand.

Lives lost…19 so far according to the last count. 500,000 suffered from respiratory tract infections. 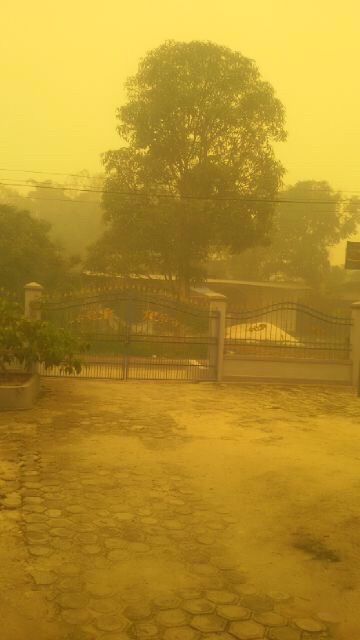 Endangered animals, orangutans are on the brink of extinction.

This is an act of crime against humanity!

This fire has been raging since July!

Deforestation caused by greedy hands who burn the forest down in hopes of turning them into palm oils have been so rampant in the past few years.

I am angered by the greed. I don’t care who started the fire, but this needs to stop! This needs to change. This can no longer be a yearly occurrence. Not in Indonesia, not in other countries. 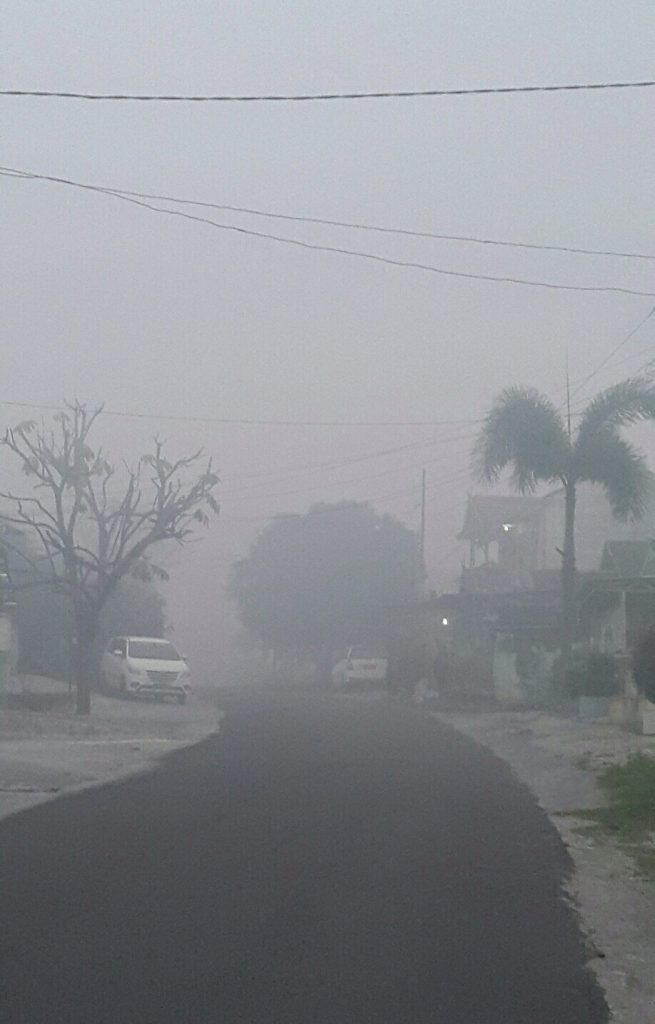 Our innocent children are being put at risk. Indigenous people are losing their home.

Animals that are already on the endangered species list will soon only remain as photos for our children to see in books one day, if we keep going at this rate of earth destruction.

Can you imagine yourself living through this?

These images above are all from a friend who lives in Palangkaraya, Central Kalimantan. She had to evacuate all her children for cleaner air.

The world needs to push for a real plan to end this because once the forest in Indonesia is completely gone, the whole world will feel its effects.

How do you think, we, as mother’s can help?

Photo credit to the author’s friend.