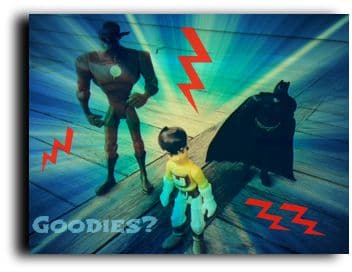 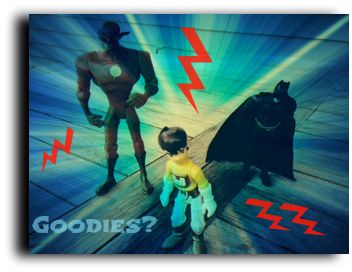 One of the perks of being a mom is that your kids look up to you. You are their personal super hero, you walk on water. Nobody comes close to your ankle. No president, demi-god, big cheese CEO. No one.  Because no matter how powerful, awesome or exceptional these people might be, they all had a mom who wiped the snot off their nose at some point. Moms rock like you wouldn’t believe!

The downside of being such a butt-kicking-rock star, is that moms are expected to have a lot of answers, solutions, or at least wise words about more or less everything. And if you think that, “Where do babies come from, for real?” is as hard as it gets, then brace yourself!

The toughest question I ever had to answer came up when my boys were respectively three and four. In those days, their world was simple: you were either a Goody, or a Baddy, and that was pretty much it.

One day, a visitor came to our house and my eldest asked him, “Are you a Goody, or a Baddy?” It was important for my kids to know which side of the fence anyone would be standing on, because it pretty much was all there was to life in their toddler world. In order to humor them a little, our friend answered,

And that’s when it all began. . . suddenly, the world wasn’t black or white any longer. My boys had officially been introduced to shades of gray.

Baddies could look like Goodies, Goodies might become Baddies. Some people could be Baddies and Goodies. My head started to spin with the endless stream of questions that followed our visitor’s statement.

“Mom, is it true that Baddies can be Goodies?”

“Hmmm, yeah, sometimes it is.”

“And can Goodies be Baddies as well?”

“Yes, they can.”  My littlest one looked at me like I had become totally insane.

I should have said, “You’re right honey, Mom was just being goofy,” and that would have been the end of it. But as I made this really silly vow to never lie to my kids, I kept pressing forward with logic and truth, which I have now established are rubbish tools for three year olds.

“Well, maybe Batman became a Goody because he experienced life as a Baddy and didn’t like it. Maybe Poison Ivy used to be a Goody. Then someone hurt her feelings, and she decided to become a Baddy, so she doesn’t get hurt anymore.”

“Huh? What does that mean?” I could see his eyes begging me to make sense and restore order in his world.

So I did the only sensible thing there was to do in this very, very confusing situation. I turned to my husband and said, “Hun, pack the bags, we are moving to a remote island where there is no TV, no Goodies, no Baddies, or anyone for that matter.”

Of course, we only moved in my head and in real life, I am teaching my growing children that shades of gray are a major key to unlock empathy…without ever forgetting that some things are just plain wrong, and no gray lens is ever going to make them right.

How do you teach your children to empathize without compromising?

This is an original post to World Moms Blog by Nadege Nicoll. She was born in France but now lives permanently in New Jersey with her family. Nadege also writes a daily blog for moms who need to smile at everyday life. She can be found on Twitter, Facebook and her website www.nadegenicoll.com.

Nadege Nicoll was born in France but now lives permanently in New Jersey with her family. She stopped working in the corporate world to raise her three children and multiple pets, thus secretly gathering material for her books. She writes humorous fictions for kids aged 8 to 12. She published her first chapter book, “Living with Grown-Ups: Raising Parents” in March 2013. Her second volume in the series just came out in October 2013. “Living with Grown-Ups: Duties and Responsibilities” Both books take an amusing look at parents’ inconsistent behaviors, seen from the perspective of kids. Nadege hopes that with her work, children will embrace reading and adults will re-discover the children side of parenthood. Nadege has a few more volumes ready to print, so watch this space…