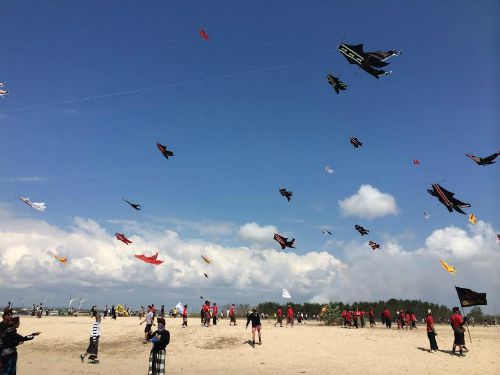 Dry season on the island of Bali brings along some really strong winds; the whistling, tree bending kind. It’s still extremely hot, but at least the afternoon winds are refreshing, making it the perfect conditions for kite flying season.

This year I promised the kiddos that I would get them a kite to fly in the park. I found a little shop close to the school that sold some inexpensive kites in the shapes of dragonflies. I bought a red, black and yellow one and took the kiddos to the Lapagnan Puputan Park after class. In fact, the lady that sold me the kite spoke to me in her native Indonesian and said the kite was 15 thousand rupiahs, but I understood 50 thousand. Thankfully, she was kind enough to chase after me with my change when I had already walked away with the kite. Expat life…

The winds were so strong that it really was not that easy. Unfortunately, our string wasn’t a full constant thread but had a knot tying two pieces together. It didn’t take long for it to break with the wind. Big Kiddo decided to run while holding the kite and he had a better time of it. On that note, next is a photo from a much more successful kite flying attempt he had with his father weeks prior by the ocean. Check out his airplane kite! 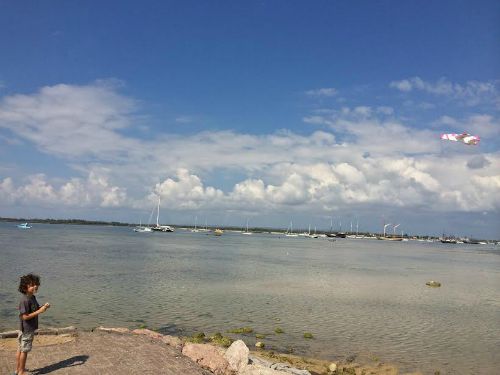 We love seeing the kites everywhere, out the windows of our house and when we drive somewhere the kiddos always find new ones with beautiful colors and start counting how many owl shaped ones or how many fish ones they see on a trip somewhere.

Kite flying in Bali is not just a pastime for the kids; it is a cultural and religious phenomenon that takes over life itself for the entire dry season.

Between May and September, the sky is spotted with kites, of all sizes and colors; many are as far away as a kilometer it would seem (I’m sure it’s not that far up, but it feels like that).

Everywhere you look there are kids flying small kites, in parks and beaches there are groups of men flying giant kites, on the sidewalks kids making kites out of sticks and plastic bags.

There is no piece of sky untouched by a kite on a string. You may even trip on one if you aren’t paying attention. If the winds are good, the kids will tie their kite to a rock or tree and play ball while it flies.

Why are kites so important in Bali?

Kites are seen as an offering to the gods, a fun way to appease the demons, and good old competition. All with the hopes of having a successful harvest that year.

Apart from the kites for children, there are ceremonial kites that can be so big they need teams of 10 men to fly. They come in different combinations of red, black and white. 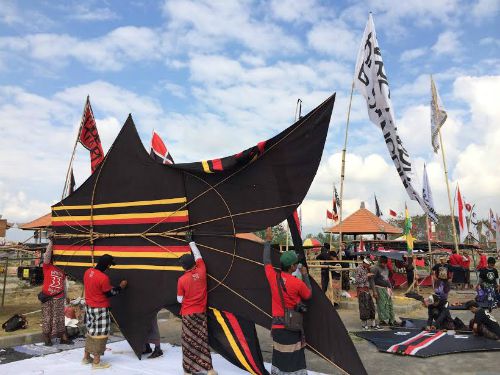 Every August, the village of Sanur holds a kite flying competition on the beach. There are three different categories, the classic fish shape kite, kites with a tail that can be as long as a 100 meters, and “new creation” kites which are usually animals or other crazy constructions.

Every team of kite fliers has flyers, flag bearers, and Gamelan musicians to accompany the flying of the kites. The competition consists of points for best launch, height of flight, length of flight and amount of control. Kudos for the kites that don’t fall to the ground!

Made with very thin cloth sewn onto bamboo sticks, the traditional fish-shaped kite is the kind that the kids learn to make at school with pieces of plastic bags. Once the kites are ready to be taken somewhere to fly, be it for the competition or for practice, the flying teams pack up the kites together on a truck, stopping traffic for almost an hour. Whenever we run into one, the kiddos love seeing what kinds of kites are being packed on the truck.

Given my own attempts at kite flying, perhaps next time we’ll just enjoy watching the experts!

This is an original guest post to World Moms Blog by Orana Velarde of Bali, Indonesia. She can be found on her blog, Crazy Little Family Adventure.

« USA: The Mother on a Refugee Boat
JORDAN: The Most Important Things Out of Education »