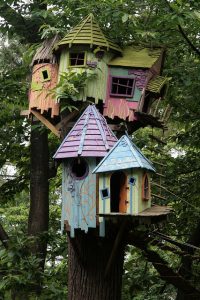 When we first married we lived in an apartment in the heart of a big metropolis. It was practical to live near everything we needed and be able to do all of our errands by foot or bus (in fact, we had no car and walked to work). However, we missed having green. We started looking for a house in a nice region on the outskirts of the metropolitan area, near a forest reservation.

When we finally found a place we could afford to rent it wasn’t exactly your typical house. The owner had built two tiny guest houses in the back of a property he had initially planned to build a regular house in the front of later on; but that never happened.

On the upside we were living glued to a fragment of Atlantic rainforest and our son now had a huge garden to play in. On the downside, the house wasn’t exactly practical.

One of the guest houses had two rooms, a kitchen and a terrace. There we installed our son’s room and ours. However, the kitchen was so small it would only fit the fridge OR the stove, so we had to put the fridge in the second guesthouse and crossover all the time, sun or rain.

The second guesthouse, in turn, had a living room/terrace, one room (which became our library/office), the main bathroom and a pantry of sorts (we squeezed in the fridge instead). The roof had no lining, which wouldn’t be a problem if we didn’t have constant animal visitors coming in (lots of funny stories about that!).

Later on, when we were able to buy the our place, we decided to apply our limited funds to adapt the two guesthouses. An architect friend did his best to join them together into a single, more conventional house.

Our bedroom was expanded and incorporated the tiny kitchen and part of the terrace. A living room was built to join the two houses, which took the shape of a “J”. The main bathroom and former pantry gave place to the new kitchen. Part of the terrace became the laundry room. We lined the roof, installed mold-proof open wardrobes, and installed a large bathtub where our two other children were later to be born.

Nevertheless, all of this did not happen at one time. As I said, we had limited funds and every time these funds began to wane we had to stop.

At three different and stressful moments a lot of work was done in the house, including once, when during three very challenging months, we had to live at my mother-in-law’s.

Besides the bedrooms, we never put in windowpanes or doors. The terrace/living room still opens completely into the forest – a curse and a blessing all at once! And even though our financial situation has improved considerably over the past few years, it has been four years since our last attempt at home improvement.

Aside from the occasional efforts to clean/fix the roof from the huge amount of leaves we get, we haven’t done much. Every time we think of all the stress involved we decide to postpone any kind of big project.

Despite everything, I love my house and its garden. I believe things will get better as our children grow older and we have more time and energy for housekeeping and improvement. My husband, on the other hand, thinks there is no way to make this house work and we should just move elsewhere, even though he also loves the closeness to the forest. The truth is he would like to live on a small farm, although I have safety concerns. Thus, every once in a while we go house or farm hunting.

How about you, what are your stories with house remodeling and moving? Please share below?

This is part 1 of a two part, original post to World Moms Blog from our contributor and mom of three in Brazil, Ecoziva.

The image used in this post is attributed to Karen Roe. It carries a Flickr Creative Commons attribution license.