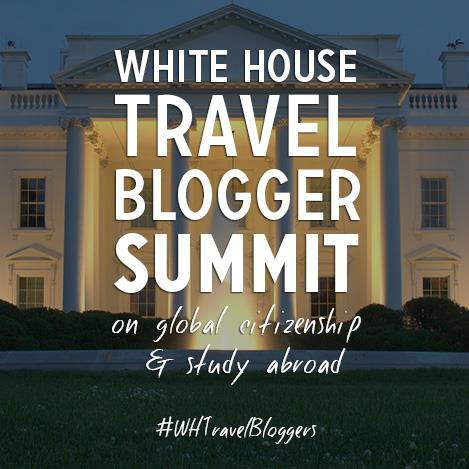 What I learned at the White House Travel Blogger Summit this week…!

On Tuesday, December 9, 2014, the White House invited over 100 social media influencers in travel and global citizenship to Washington, D.C. to discuss study abroad programs for students. Puzzled about the high level concern? Statistics show that our country is lacking in global ambassadors abroad, and this effects our global economic competitiveness and matters of global security.

It sounds like a big number, right? Well, according to Evan Ryan, Assistant Secretary of State for Educational and Cultural Affairs at the US Department of State, that number accounts for just 1.5% of the population of 20 million students enrolled during that same time period. Just 1.5%. Shocking, right? Yet, nearly 50% of students indicate that they are interested in studying abroad when they first enter university. So, why is traveling abroad as a student actually a rarity?

Some barriers to taking the international leap can be finances (that was my case!), no flexibility to take courses outside the university in your major, parental concerns, roommate concerns, intimidation of living in a foreign country and lack of information about programs and scholarships.

These were the type of issues that we discussed with top U.S. government officials at the White House Travel Blogger Summit this week. In fact, the White House has announced the launch of a U.S. study abroad office within the next 6 months, as well as, the first-ever Virtual Study Abroad Fair, to be held on February 25, 2015. The new office will help make it easier for more students, regardless of sex, race or socioeconomic status to make studying abroad a reality. And perhaps, we, at World Moms Blog can help with the parental concern part. 😉 (Stay tuned to the blog for advice for parents!)

Why is the U.S. State Department pushing the value of an international component of education?

Our next generation of leaders must have experience as global citizens to be able to “operate within the global political and economic landscape of the 21st century”, according to Evans. An increase of Americans traveling, studying, working and volunteering abroad also helps to break false American stereotypes.

In my own student experience, I spent a summer abroad in Japan in high school thanks to a local scholarship, when I got to college the door to study abroad was closed to me. I was receiving need-based financial aid at a private university consisting of both, Federal aid and aid from my university’s scholarship fund.  However the private funds only applied to my education at the university, not abroad. So, I was disappointingly priced out.

This week I had the opportunity to speak with Evan Ryan one-on-one just before she spoke at the White House Travel Bloggers conference, and when I told her my story, she told me about the Benjamin A. Gilman International Scholarship Program. This scholarship aims to target the population of U.S. students underrepresented in study abroad programs and sends about 2,000 kids abroad to study annually. To be considered for the scholarship, a U.S. student must be receiving need-based financial aid, such as an US Pell Grant or US Stafford Loan (two types of government subsidized need-based university financial aid).

The challenge? Over 9,000 students apply for the Gilman scholarship each year, but only 2,000 can go. It would be great for more students on need-based financial aid to have a global education experience, and the launch of the new U.S. office of study abroad plans to work toward just that goal — that study abroad is for everyone.

The Economic and Political Landscape is Changing and Friendship Aids Navigation

With greater access to transportation and technology in this day and age, the economic and political landscape is changing. There will continue to be more business and government roles that will require candidates who have foreign language skills and global experience. And, perhaps, the most important and overlooked landscape? Friendship.

Having friends around the world is interesting, fun and mind opening, as we have been learning for the past 4 years, here, at World Moms Blog. Being able to put ourselves in our foreign neighbors’ shoes to better understand what their lives are like makes us more understanding global citizens, and vice versa.

One of my most interesting moments in blog friendship was when one of our international contributors that I’ve been working with here over the years once said to me, “I had no idea Americans could be as understanding as you.” It took me by surprise! But then I realized where her statement was coming from — she was getting to know my country in a more personal way through our friendship, just as I was getting to know hers. Social interaction is key to global citizenship and breaking stereotypes.

Just by increasing the human interaction between people of different countries and cultures, I really believe that her sentence can be replaced with any nationality. The key is getting to know each other and realizing that what it is to be a good human prevails behind borders, burkas, playing helmets, Mardi Gras masks, kilts, saris, newspaper headlines and beyond. We just have to get to know one another, human to human, and then we can better navigate the changing global landscapes…together.

“When we study together and we learn together; we work together and we prosper together.” — President Barack Obama May 3, 2013 **Stay tuned for more about the White House Travel Bloggers Summit on World Moms Blog — we have even more to say about our tour of the White House, experience at the National Press Corp., Newseum tour and dinner sponsored by Turkish Airlines and additional speakers on global citizenship and travel abroad!

This is an original post by founder, Jennifer Burden of New Jersey, USA, to World Moms Blog.