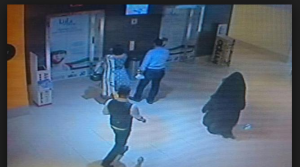 “Are you okay?” The emails and Facebook queries began pouring in even before I knew what had happened. “Were you there?” One particularly dramatic friend asked if “what happened” made me think about moving home.

Their queries followed the terrible news that had gone viral almost as soon as it happened: in a mall bathroom in Abu Dhabi, where I live, a veiled woman had killed a Western woman—-an American teacher-—with a long kitchen knife.  Adding to the horror of the attack was the fact that the victim’s children, eleven-year old twins, were apparently hanging out in the mall waiting for their mother to come back from the bathroom.

I didn’t hear the news until I got home from work that day and opened Facebook. I suppose that people were particularly worried because I am also an American teacher, and about a month ago, the US Embassy in Abu Dhabi reported that anonymous threats against American teachers had been made on a jihadi website. For a day or two after the attack, news reports tossed around the possibility that the veiled woman was somehow in league with ISIL, or some other terrorist organization.

As it happens, however, the murderer had no discernible terrorist allegiances, and what happened in that mall bathroom was just an appalling act of violence.  Some of us who live here speculated about the difference between what happens in the US when an unstable person finds a weapon and what happened here:

a butcher knife is a brutal instrument, it’s true, but it creates far less mayhem than, say, a semi-automatic rifle.

Violent crime is incredibly rare in Abu Dhabi. Yet, despite the rarity of violence here, and despite the stability of the Gulf States, there was the chatter on Facebook; there were the emails; there were the questions about whether this attack would cause me to move home. “Home” is a bit complicated for me: I’ve lived in Abu Dhabi for almost four years, but had been in Manhattan for almost twenty years before that.  So “home” is here. . . and there.

Before we moved to Abu Dhabi, my family and friends were worried about other things. “Are you going to have to, you know,” they’d ask, swirling their hands around their head as if describing the world’s biggest beehive hairdo.  Their swirl implied “covering”: would I have to wear a headscarf or an abaya when I went out in public?  The answer is no.  I feel free to walk around alone wherever I please, dressed much the same way I would be in New York. There are no laws governing how people dress here; women are free to cover or not cover, and on the beaches you see burqas and bikinis with equal frequency.

In fact, I feel as safe walking alone in Abu Dhabi as I ever did in New York.  It’s the kind of place where I leave the car doors unlocked when I run into the grocery store, and where more than once I’ve forgotten my phone in some public place, only to run back ten minutes later to find it exactly where I left it.

I share the sentiments of my local friend, Ken.  In response to the news, he posted the following message on his Facebook page: “Thank you for your e-mails and messages about the American woman who was killed here on December 1st. I appreciate your concern. But please be assured that I don’t feel in any greater danger being a Westerner in Abu Dhabi than I felt being a gay man in New York City. In fact, it’s the opposite. I’m used to danger.

The only way to protect oneself completely from acts of terror or random violence is by not participating in the world. I won’t do that.”

The expressions of worry that came from my family and friends in the aftermath of this attack were real, I know. And there is no doubt that what happened is appalling and has ripped apart the lives of this woman’s family. But I can’t help but suspect that this story got as much coverage as it did (there are more than thirteen pages of hits for “American teacher slain Abu Dhabi) because the attacker is so visibly Other: a veiled woman, an exotic symbol of “the Middle East,” which to much of the West is still an undifferentiated blur of veils, oil rigs, and jihadis.

Here’s the teaser from CNBC when the story about the knife attack first broke:

I wonder about the leap: that an attack in a mall bathroom by a woman with a knife might have implications for “foreigners” living anywhere in the Middle East.

It’s a strange twist, isn’t it, to think that had the Western media simply assumed that the attack was an isolated, horrifying incident—the work of one crazy woman—it might have represented a step forward?

This is an original post written for World Moms Blog by Deborah Quinn.