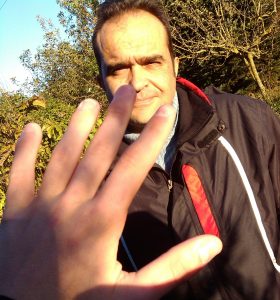 How many of you are experiencing a golden period in your lives with little or no stress? Who is feeling satisfied with their national education and health systems? Well, I hope you are more fortunate than we are in Greece where we have unemployment rates in some demographics of up to 40%! The education system is going from bad to worse and forget going to the state run hospital and expecting satisfactory health care.

Due to all this nationwide negativity and disappointment, I decided to take a humorous look at some Greek customs and habits which have caused smiles and even hilarity over the years. Hey, most of us who live in Greece are in serious need of laughter therapy! So, let me share with you some little gems that I’ve experienced over the last 2 decades and hope some will bring a smile to your face!

I have driven all over Europe and have seen many odd things but I have to take my hat off to a large proportion of Greek drivers. These people seem to have an amazing ability to multitask. I was astounded when I first arrived here to see whole families mounted on little motorbikes, something like the Dalton brothers all in a row! Apart from being stunned at a bunch of road safety regulations which were being broken, I was amazed at how such a small vehicle could be powerful enough to transport a whole clan from point A to B. Thank heavens that such sights have become rare in towns and cities over the past few years since enforcement of safety regulations has become much stricter! I only see such things from time to time in villages and on islands where the traffic police tend to be more tolerant and turn a blind eye. Going back to the point I made about multitasking, imagine that to pull off such an acrobatic feat you need to combine an incredible sense of balance, total concentration on the road and on rainy days the ability to steer holding an umbrella!

I’m British and nobody would dare do such a thing in the UK unless they were an acrobat in a circus!

Another thing which I found a little difficult to get used to is the reduced personal space that most N. Europeans are used to. There is definitely a tendency to  be within touching distance of the person you are chatting to. Most Greeks are a passionate bunch, full of the Mediterranean joy of life. When engaging in conversation, even with perfect strangers, there’s a lot of back slapping and arm waving to punctuate every  sentence.

I was once almost hugged into a coma by a charming taxi driver who was a total stranger.

The reason why? He asked me what my favourite Greek food was and when I replied (in Greek) that I loved spinach pie made by my mother-in-law, he went into a passionate frenzy! He thought that a foreigner speaking Greek was really quaint, but it seems that using the words “mama” and “pie” in the same sentence triggers a deeply rooted Greek male reaction! So be warned, if you should ever travel to lovely Greece, stay at least three paces back from men if you are intending on broaching the subject of mothers and their skills…

I should also warn you about one specific hand gesture which you should avoid at all costs should you ever engage in conversation with a Greek. Let me share a very humiliating story with  you.

When I first arrived in Greece over two decades ago, most correspondence was still done using snail mail. After my first week here, I visited the post office in Ioannina to buy stamps and waited patiently in the huge queue. When it finally got to my turn, I politely asked in English for 5 stamps. The woman behind the counter just looked at me blankly so I tried again. This time she started talking loudly  but it was all just Greek to me then and I didn’t have a clue what she was saying. She seemed to be really agitated, though. At this point everyone in the crowded post office stopped their private conversations and pinned me with their eyes. I gulped, went bright red and made one final  embarrassed effort. This time I tried to help her by using a hand gesture. As I said the word five, I put up my right hand with my palm facing outwards. I repeated several times that I wanted five stamps, whilst waving my outstretched palm in front of her. There were gasps from all around the post office and the office employee went crazy!

A young girl who was standing a few places behind me came up and told me in English that I had just told the woman to go to the devil!

This hand gesture is very rude and apparently if you put your hand up it should be with the palm facing yourself. Well, nobody had warned me about that!

I’ve had many funny and embarrassing experiences in Greece and seen things which you wouldn’t ever see in the UK. I have learnt that before I travel abroad it’s imperative to learn about the do’s and don’ts of the culture and people I will be visiting BEFORE I get there.

Have you ever said or done anything in another country which has caused you to cringe with embarrassment in retrospect? What about things you have seen which would never happen in your own country?