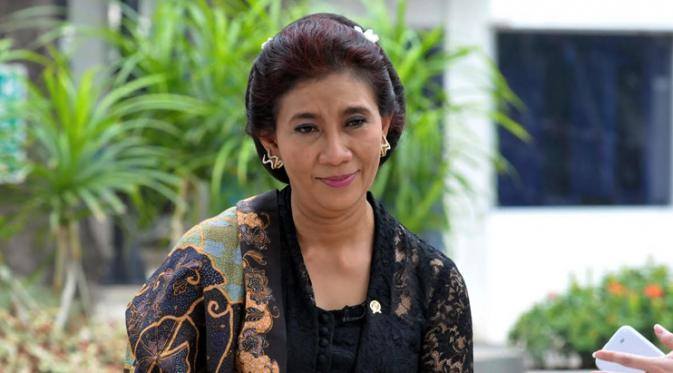 Big changes are taking place in Indonesia lately with the new President Joko Widodo (or as we Indonesians lovingly call him, Jokowi) taking office last month.

Six days after he took office, Jokowi announced his cabinet lineup to the public. Eight women out of a total of 34 have been elected as ministers. It was the highest number of female cabinet ministers that has ever been elected in our country’s history and demonstrates Jokowi’s courage in giving women an opportunity.

Gender equality opportunity seems to have a brighter future with this cabinet lineup.

One of the women ministers that has been elected is Susi Pudjiastuti. She was elected as Minister of Maritime and Fisheries.

The media have been talking about Susi all of a sudden. She even became a trending topic on Twitter. Her election as a minister created a big controversy here.

She was not someone that came from any political affiliate. She is a bit different compared with some other women in world politics, like Hillary Clinton or Angela Merkel; she is a business woman. She smokes, she doesn’t have a PhD or any prestigious titles lined up behind her name – she actually dropped out of high school and unlike some others, she didn’t drop out of school because she was poor, it was actually because she felt she wasn’t happy even when she was reportedly a bright student. She decided to follow her own path at the tender age of 17.

With roughly $75, she started her first entrepreneurship in Pangandaran, Central Java with a fishery business. In 1996 she formed her own company called PT. ASI Pudjiastuti Marine Product. After her business expanded throughout Asia and America, she realized she needed a fast and reliable way to transport the seafood products to the buyers. Then Susi Air was born. She built her own aviation company even obtaining her own pilot license. Her airline now serves publicly in many remote parts of Indonesia.

Her detractors started judging her personal life, discrediting her ability to hold her role as a minister while she jumped head first into her new job in the government and making the necessary changes.

Among the negative comments however there also has been a lot of support for Susi. I am one of those big supporters.

In my eyes, I see a strong woman, someone very capable and who seems to have a strong character and is very intelligent despite her lack of a college education. Being a successful, independent single mother will really inspire other single mothers in Indonesia. We now have the first single mother minister in the history of Indonesia.

For the Indonesian patriarchy system, this feels like a big breakthrough and already she is busy working hard to fix the maritime and fisheries industry. Jokowi believes in her and that she has what it takes to get the job done and to create breakthroughs.

Jokowi is leading the way by giving Susi Pudjiastuti and the rest of the women minister an opportunity to take important roles in the government.

I salute all of these women and wish them all the best in their new roles.

This is an original post to World Moms Blog from our writer and mother of one in Indonesia, Maureen.

The image used in this post is from Susi Pudjiastuti’s public Facebook page. You can view more images of the politician here.

Former nomad, Indonesian by birth, mom, travel junkie, healthy living enthusiast. Maureen is blogging her way on a new journey in finding joy in life, one scoop at a time at her blog: Scoops of Joy