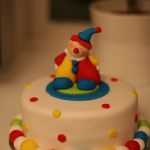 It was my fourth birthday party. Since we were moving to Brazil soon, it was also a farewell party, and a big one. It was the only big birthday party I have had in my entire life. I remember it was held at some sort of club, there were a lot of people and a hired caterer (something almost unthinkable for my mother!) And then there was the clown. And he wanted to paint my face.

I was completely and irrationally terrified as only a four-year-old can be. While most of the other children were loving it all, I wanted nothing to do with the clown and his face paint (and certainly not on my face!). My party was ruined. In fact, I hid in the kitchen the entire time.

I don’t know exactly who stayed with me in the kitchen, but I don’t think it was either of my parents – at least not all of the time. Of course they were probably running around organizing things and tending to the guests. What really comforted me at that moment was the food, more specifically the dozens of intricately decorated mini-ice cream cakes. I recall later telling someone that the good side of the party was that I had stayed close to the food the entire time.

It is interesting because here in Brazil ice cream cakes are rare – I believe I have only seen them for sale once in the more than 30 years I have lived here. I don’t know why this particular detail only came up so strongly now, nor what has been triggering this strong need for comfort and protection, which originally was a need to be shielded from someone scary (the clown) who wanted to do something I did not want to do (paint my face).

I don’t know if this is related, but it is also funny because I was never a big fan of makeup. Also, once when I was six and went through a brief period of interest for makeup, I got a kit of child makeup and ate several of the flavored lipsticks that came with it!

For instance, it has reminded me that no matter how I try, it is impossible to protect them from every traumatic incident or foresee the lasting effect of seemingly small events on their lives. On the other hand, it is also a strong reminder not to belittle the things that upset them – what might seem insignificant or minor to me may be a huge deal to them and I must give them the best emotional support we can at all times.

This is the continuation of an original post to World Moms Blog published by our writer in Brazil and mother of three, EcoZiva. You can read Part I here.

The image in this post is credited to Chris Martin. It holds a Flickr Creative Commons attribution license.