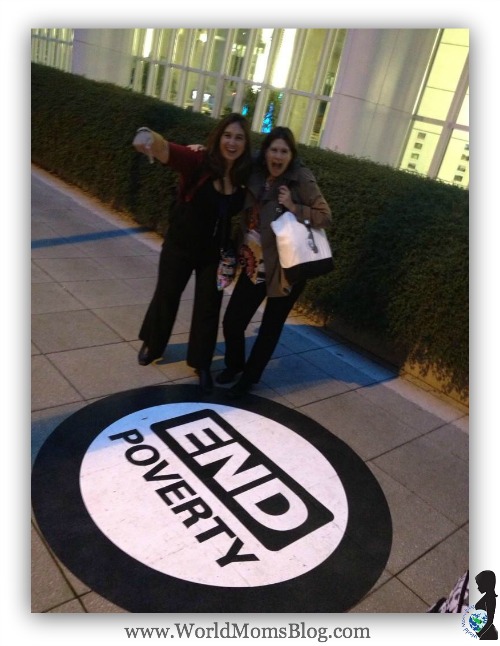 World Moms, Cindy Changyit-Levin and Jennifer Burden, are in Washington, DC this week for the World Bank Civil Society Meetings.

About 10+ years ago I worked in Washington, D.C. as a financial analyst, and when the World Bank meetings were coming up nearby my office, my then employer, the Federal Reserve Board, would caution us about the protests surrounding the event.

We were told to take a different metro route or come into the office at a different time in the best interest of our safety. But this week I was invited back to Washington, D.C., in fact,  for the World Bank and International Monetary Fund (IMF) meetings by the World Bank to report for World Moms Blog, and now the atmosphere is a little different…

Gone are the closed doors.  The World Bank has since opened it’s doors to civil society and are taking note of the concerns of people from the countries where they are lending. This was very different from my first impression of the World Bank and the International Monetary Fund — I had learned back in the late 90’s in college as a finance major that the organizations were set up to end poverty, but their lending actually made the countries worse off in the end.  Hence, the angry protests of the past from people who cared.

It was time that the World Bank concentrated less on turning a profit and more on helping civil society, the very reason why it was created in the first place.

New leadership — did you know that Jim Yong Kim, the current President of the World Bank is a former anthropologist, cofounded PIH with Paul Farmer and others and was formerly the Chairman of the Department of Global Health and Social Medicine at Harvard Medical School? — has come in and the doors have been held for the angered (rightfully so) civil society members, so all should be good now, right?

But, how quickly can change occur under new leadership in an organization of over 9000 people?

The answer is that it takes time.

The World Bank is currently undergoing a reorganization, which is ruffling a lot of feathers, as there were protests just yesterday from staff members about the reorg and the payment of higher-ups, according to the Financial Times. And, yesterday at the civil society meetings we heard complaints about corruption and lack of adequate safeguards. Safeguards are precautionary or counter measures that are put into place to protect against the infringement of an agreement.

We heard concerns about human rights issues including gender equality and LGBT rights. And, we saw World Bank employees and officials taking notes and saying that they’d get questions to the bank leadership.

In fact, the bank fielded questions from people who flew in from Morocco, Albania, Egypt, Madagascar, Congo and more places for a “Civil Society Town Hall” with Dr. Kim and the managing director of the IMF, Christine Lagarde that will take place tomorrow.

The World Bank has invited its most stringent critics into their doors from the streets and is listening.

How can you make change if you don’t know what the problems are?

This process of listening is a big step from the bank of the past.  How can money be lended to developing countries and provide the intended result, to end poverty?

Who will be on the ground policing the programs and seeing them out as intended?

This is a pivotal time in World Bank history, and I look forward to watching it unfold in the right direction to help, as is stamped on the pavement outside and in all the elevators to…”END POVERTY”.

Follow World Moms Blog contributors Jennifer Burden and Cindy Changyit-Levin as they report from the World Bank Civil Society meetings this week.  They will be live tweeting from @WorldMomsBlog, @JenniferBurden and @ccylevin. Also, follow the hashtag for the event: #acso14.

See the article on World Moms Blog by Cindy Changyit-Levin that got us invited to the meetings this week.

This is an original post to World Moms Blog by Founder and CEO, Jennifer Burden of New Jersey, USA.