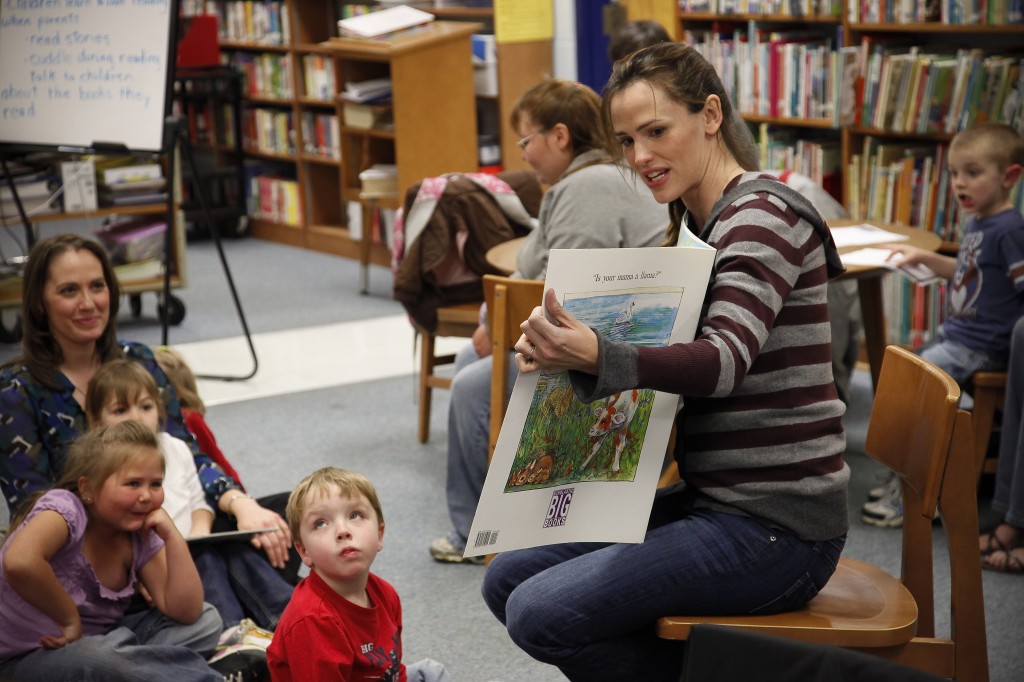 Actor Jennifer Garner visits with school children who are participants of a Save the Children reading program at LBJ Elementary School in, Ky. Photo by David Stephenson

“OPTIMISM”, Jennifer Garner chose the word optimism when we interviewed her about her work with Save The Children and the #FindTheWords campaign. My word had been “LEAD”, Jen Burden’s was “CREATE”, and Stacey Hoffer Weckstein of Evolving Stacey, who did the interview with me, had “COURAGE”. These were our words in the 30 words, 30 days blogger challenge for #FindTheWords to represent the 30 million fewer words kids would learn in homes without early education.   In turn, when we had the exciting opportunity to interview her, we asked Jennifer Garner what her word would be.

“If you are working with a baby, with a mom, with a toddler, there is just so much optimism, she explained. I just feel like it’s just the most optimistic thing in the world to work on early childhood stuff”.

The investment in early education is optimism at it’s best. Studies have shown that the impact of early education can have long reaching effects as a child grows up. Kids are better academically prepared, socially adjusted, and tend to stay in school longer when they receive early education.  In our conversation Jennifer Garner pointed out that some states have figured out that the money they spend from birth to five years old goes so much further than the recidivism that they would otherwise spend when a child is older and having trouble.

The hard facts cited by Save The Children are that in the United States 1 in 4 children lives in poverty and many do not have a single book in their home. These kids are not read to, and will not have access to a pre-school education. By age three they will have heard an average of 30 million less words than their peers which puts them at a great disadvantage before they even reach school. Ultimately these kids are 70% more likely to be arrested for violent crimes, 40% more likely to become a teen parent and 25% more likely to drop out of school.

“The injustice of  it hits me at my very core.” said the mother of three.”So I just feel this drive to help be a part of making it be better.”

Jennifer Garner feels lucky to have come from a home with educated parents, but growing up in rural America, in West Virginia, she was aware that it was education that had made an enormous difference in both of her parents’ lives. In each case they were the first in their families to go to college, and it made her wonder who was around to help other kids like them to succeed without role models?  Once she knew that this was the area in which she wanted to use her voice to make a difference, it was Mark Shriver, and Save The Children that she found was making the type of impact she was looking for in rural America.

Taking time out of her busy day with one of her little ones not feeling well,  less than two weeks before her latest film, Alexander and the Terrible, Horrible, No Good, Very Bad Day hits theaters, to tell us why the issue of early education resonates with her was gracious beyond belief. She explained that her experience in the field with Save The Children, visiting mothers and children, had only made her want to do more. “The more you are let into people’s homes, and into people’s lives, and into people’s struggles, the more driven you become to do what you can to help them.”

Of the mothers she has had the chance to visit Jennifer says often “These moms are isolated, they’re tired, they don’t have mom friends or computers to read what you guys are writing about or to be encouraged.” ….” so when Save The Children rolls up and goes once a week to see them, they bring them books , they bring light, they bring life. And the main thing that I love to see is they bring encouragement for these moms.”

I asked Jennifer Garner her wish for all moms, to which she replied….

“Motherhood is the great equalizer, right? We’re all, as soon as you have a baby, we all have the same love and hopes, and dreams, and fears, and vulnerabilities, and I would just hope that nobody feels like they are going through it alone……it’s really hard to do on your own”

That’s exactly how we feel in our global community of World Moms, we are here to remind each other that we are not alone, in this crazy adventure of motherhood.

This is an original post written for World Moms Blog by Elizabeth Atalay. Elizabeth had the opportunity to interview Jennifer Garner as part of the #FindTheWords campaign with Save The Children. She also writes at documama.org.