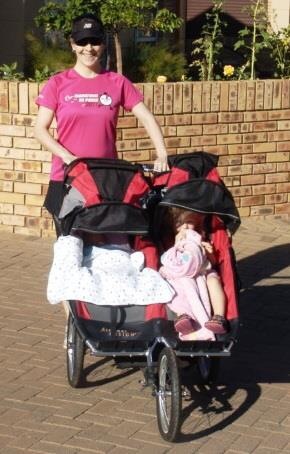 Today we welcome a guest post from South Africa! Karien Potgieter is a full-time working mom of two kids aged two and under.  She loves nothing more than to load up the double jogging stroller and set off on adventures with Little Miss K and Baby J – together they dream of running the world!  You can follow their adventures at www.runningtherace.co.za.  Here, she introduces us to what she calls, “Planet Parenthood”. It’s a hoot! Read on…

Becoming a parent for the first time is a bit like entering a whole new universe.  For nine long months little old ladies scare you with old wives’ tales; complete strangers feel enticed to make unwanted comments about your body shape; and discussions with your caregiver border on TMI.  But no-one tells you about Planet Parenthood – it’s one of the best-kept secrets of humanity.

A parent’s first encounter with Planet Parenthood happens even before the birth of an offspring.  Whether you have a natural home- or hospital birth, or a C-Section, you’ll quickly find that there is no such thing as dignity in your new galaxy.  What was once considered to be, ahem, private business, isall of a sudden out in the open for entire medical teams to see.  And the weirdest thing about it?  No one bats an eyelid.  Not even you, because meeting your bundle of joy is way more important.  Welcome to parenthood.

The second sign that you now find yourself in a new solar system, is the fact that sleeping, which was once regarded asbeing vital to performing your daily tasks with gusto, is all of a sudden optional.

Who wants to sleep when you can party around a crib all night anyway?  And don’t let the fact that others, who are not from the planet of parents, intimidate you with their well-rested physiques and bushy-tailed appearances – looking fresh is way overrated anyway.

But those are just your initial weeks on Planet Parenthood.  It gets way, way more interesting than that.  Squeamish?  You’ll soon get over it.  Because there is no such thing as being prissy about bodily fluids on Planet P – everything goes.  In fact, everything goes all over you!  Gone are your days of going to the shops without boogies on your sleeve.  Or in your hair.  Or organic pumpkin puree artistically smeared all over your shoulder.  It’s your new normal – and you’re okay with it.

Strings and strings of hard-earned tertiary qualifications are furthermore also of zero relevance on your new planet.  Because instead of having hoity-toity discussions with others about the nation’s contribution to global warming, or the pros and cons of fracking the Karoo, the majority of your conversations for the next three or four years will revolve around Pajanimals.  And Telly Tubbies.  And the risks involved with sitting too close to the sofa’s edge.  And what will perhaps surprise you the most, is that you will actuallystart looking forward to your daily dose of Shaun the Sheep.  And Justin’s House.  Don’t you even try to fight it.

Perhaps the reason why everyone is so hush-hush about PlanetParenthood is the fact that it grows on you.

After the initial shock that comes with finding yourself in completely foreign surroundings, you find yourself adapting.  And growing.  And liking it more and more.  Until suddenly, one day, you realise that you don’t want to live anywhere else.  Viva Planet Parenthood!

This is a guest post from South African writer, Karien Potgieter of www.runningtherace.co.za.