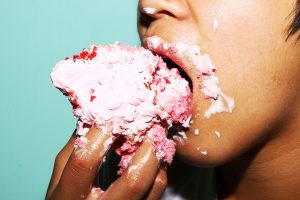 I have been an emotional eater for over two decades and over the past six years or so – when I became fully aware of the matter – I have approached it from multiple angles and using all sorts of techniques. I have worked on issues related to my father’s death when I was a teenager, my relationship with my mother and childhood issues of all sorts. I have undergone several different types of therapy, from the more traditional ones to art therapy, Gestalt therapy, family constellations and energy psychology. I have used EFT, NLP, reiki, homeopathy, ThetaHealing and many other alternative treatments.

The positive side has been that I have learned a lot throughout this process. Trying to create a healthier relationship with food has undoubtedly been what has most helped me stay on my personal/spiritual growth path over the past few years.

Emotional eating is a complex issue that can have multiple causes. These causes generally carry specific purposes which might still “serve” the emotional eater in certain ways, such as eating for a sense of comfort or protection or even to “numb” oneself of difficult feelings. Thus, they can be complicated to release unless the person becomes aware of the underlying events that gave food such emotional significance and are able to let go of that.

For instance, it might be that, as a child, someone gave the person something sweet every time he/she was upset, so the person developed the habit of eating sweets every time negative emotions come up. Letting go of that habit would then involve things like: becoming aware of the pattern and how it began, finding ways to heal the inner child that is used to being given sweets instead of the true attention or emotional support they need when negative emotions come up, and realizing that there are now adult ways of dealing with negative emotions.

Additionally, I believe we can only stop emotional eating when we truly want to. It is not like one consciously wants to continue having an unhealthy relationship with food (although one could, as surrender can also be a good tool!) but it can take time to become aware, deal with and let go of the multiple unconscious blocks around the pattern.

In my case, for example, I recognize that I have frequently side stepped certain issues and have not gone as deep as I could in certain treatments. On the other side, respecting our pace and giving ourselves the time to deal with the often painful issues – as opposed to judging ourselves and making ourselves wrong for “failed” attempts – is essential.

In my case, after three years of great improvement, my second pregnancy (which ended up in a miscarriage), followed by the pregnancies and births of my two youngest children, brought my emotional eating back to square one.

It was no surprise to me that pregnancy would once again bring up issues that would be difficult for me to deal with, but I expected that things would get better after the babies were born and began to get older. However, even though my youngest is now 16 months old things have worsened terribly and over the past few weeks I have gained more than 5 kg (11 lbs).

I have still not figured out what is triggering this new fallback, yet while using a combination of the techniques I have learned over the years, a story I hadn’t thought of for many years came to mind. I will tell that story in the next part of this post.

This is an original post to World Moms Blog from our writer in Brazil, Ecoziva.

Like Loading...
« ALBERTA, CANADA: Lost in Translation…and So Much More
SOCIAL GOOD: Help #Create The Future We Want For Children With #FindTheWords (and how to enter to win $100 gift card) »