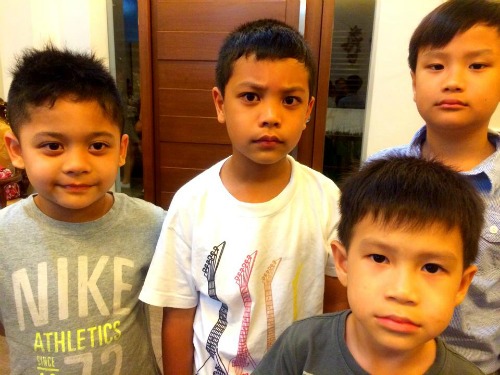 My son and his cousins!

Yes, it’s true. My 8-year old son and I recently had a conversation about his being an only child and the prospect of him having siblings in the near future. And, well, this was the response that I received from him:

No, Mommy, I don’t want any siblings.

To be honest, I have been asked several times why I still only have one child. It’s been asked so often that I already have a set of predetermined answers that I use, depending on who I am speaking with.

“Maybe eventually, when we get our own place, we can have another kid.”

“We live in one room. The only space I have left to put a crib in is the bathroom.”

“Oh, it’s so expensive raising a child! And I’m already going nuts with just one.”

“Maybe I haven’t gotten pregnant because I have yet to lose the baby weight from my last pregnancy. Oh, and yes, I know it’s been eight years.”

And the list goes on and on. There are days, though, when I ask myself if it’s time. My husband and I talked about it, too, on more than one occasion. We both agree that if it’s meant to be, it will happen. We also are on the same page in thinking that we should focus on raising our son, instead of dwelling on what may come into our lives in the future.

He’s the only one, but he sure isn’t lonely.

One of the things I am often told is that I should give my son someone to play with. And yes, it’s put in exactly those words, as if having one more kid was as simple as buying a toy from the store. I know for a fact that the age gap between my son and any baby that we might eventually have is too big for them to truly become playmates. I would know because my sister and I were born six years apart, and it was already difficult to relate to each other growing up. With the at least nine-year gap we are looking at, at this point, getting pregnant in order for my son to have a playmate isn’t exactly a compelling reason.

Fortunately, fate has made up for his lack of siblings with a surplus of cousins, who are also about his age. Between my cousins and I, we have five small boys, and they get see each other quite often. One is even in the same school and grade level as my son. We also recently made friends with some of our neighbors who have young boys at home, and so playdates are fun for us both. The mommies get to chitchat while the kids run around and be kids together.

And just recently, our family was blessed with a vacation getaway together with fellow World Moms Blog contributor, Tina and her family!

Her son and mine became friends in an instant, and that trip was definitely one of the most memorable yet. Yes, he may be the only one, but he sure isn’t alone. 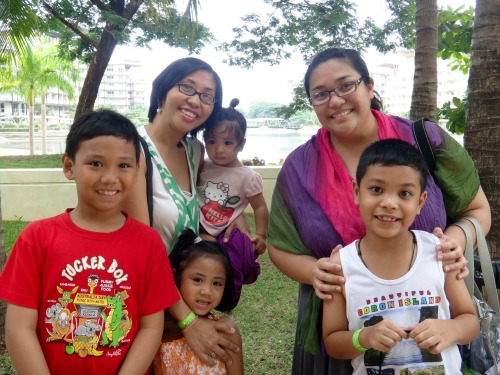 World Mom Contributors Tina Santiago-Rodriguez and Mrs. C. on vacation together in the Philippines!

I am very content being mom to just one child.

There are definite perks to having a small family. I get to focus on my child 100% each and every time. And because my attention is all on him, I can see so clearly what an awesome kid he has turned out to be. He has become very close to both his dad and I. He is growing up to be independent, secure and confident. He knows how to keep himself occupied and entertained, and without gadgets at that. He is excited about making new friends and spending time with them. He loves hanging out with his parents, grandparents, aunts and uncle.

I know that being able to care for him myself, with the help of family, of course, has played such a big role in his development. I, honestly, can’t say if it would have been the same with more kids at home, but there’s really no reason to dwell on what might have been. For now, I am happy with just the opportunity to be a mom and to raise a child. And in the future, if it’s meant to be, I know that I will be the most excited over having more.

How about you, how many kids do you have? Parents with only one child, does your kid look forward to having siblings? And to the moms with several children, how has having siblings helped your child in his growth and development?

This is an original post to World Moms Blog by Mrs. C of “Mrs. C’s Sugarcoated Life” in the Philippines.

Patricia Cuyugan is a freelance writer and the resident mom blogger at www.mrspcuyugan.com. She is a WAHM, domestic diva in training, real housewife of Ayala Alabang, and mommy to an 8-year-old boy who is known online as Little MrC. When stressed, she turns to crochet, chocolates and hugs for comfort.

« ISRAEL: #BringBackOurBoys
CALIFORNIA, USA: When “Beauty” Products are Killing Us »