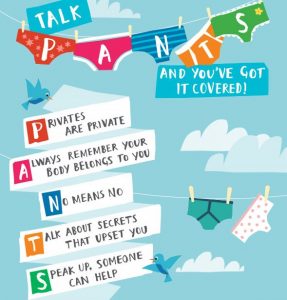 It was the horrific news  of sexual abuse at the Jakarta International School in Indonesia that spread the nation like a wild fire.

It was every parent’s nightmare.

It raised safety issues in school.

My son’s school is installing security cameras outside of the children’s toilets and carrying out special program called “Personal Body Safety” to teach children as early as first grade about it. And most importantly, it opened up discussions between parents and their children and that’s what happened between my son and me.

It was the news that made me read as much information as I could about child sexual abuse. By reading some really helpful articles, I realized it was time to start introducing the ‘real words’ for body parts with my son.

Yes, I had read that one is supposed to use the correct biological terms when you teach your children about their body part but I guess my own personal upbringing prevented me from doing this before. When I grew up, I did not even know what my private parts were called. My parents and their parents’ parents never openly discussed this. Sexuality was a taboo discussion back then, and sadly it carries on into today’s generations, here, in Indonesia.

At first I was uncomfortable in teaching my son to say “penis” now instead of “pee-pee”, but once I realized how this was NOT about me and my uncomfortableness, but something more important, made it easier. This is about me teaching him the right words. We talked about private body parts and how no one should touch them other than doctors IF he is sick and his private parts needs to be examined. We talked about the PANTS and how he needs to avoid being in a situation where adults are getting too close to his private parts.

Such a fine line between educating them and not scaring our children but it is very important to teach them about the boundaries and about protecting themselves. The statistics are so disturbing that your daughter has a 1 in 4 chance and your son has a 1 in 6 chance of being molested before the age of 18. Other than teaching them about private body parts I think it is also important to teach our children to listen to their guts and trust their instincts. I pray hard that my boy and all the children of the world will never have to experience such a traumatic thing but I realize knowledge and awareness are power. So we sit and watched this short movie together, my boy and I.

He asked me questions and I answered them the best that I could. Discussions went on. Yet, I realized we will have to talk about this often to instill in him about the safety parts not to scare him.

How do you talk to your children about sexual abuse?

Here is a very helpful link from the NSPCC site.

This is an original post by our World Mom,  Maureen of “Scoops of Joy” in Indonesia for World Moms Blog.