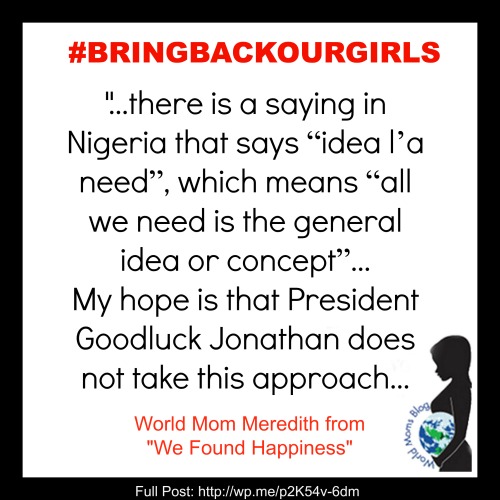 Nigeria is a land of conflict and contrast. Since it’s civil war in the late 1960’s and even earlier, this country is no stranger to acts of violence and tragedy.

According to an article from CNN written by Faith Karimi , “Nigeria is Africa’s most populous nation with 175 million people living within its borders. It is a key partner to the U.S., is rich in oil, and a major trading partner with China.”

According to Wikipedia, “it [Nigeria] has one of the highest economic growth rates in the world at 7.4% over the last decade, but it has retained its high level of poverty at 63% of its people living at or below $1 a day. It’s two main resources are oil and agriculture. However, oil contributes to government revenues and about 15 percent of the Gross National Product and only employs a fraction of the population. Agriculture revenues go to 45 percent of the Gross National Product but employ about 90 percent of the population.

Nigeria’s government provides Nigeria’s states and local governments with autonomy including 50 percent of government revenues as well as responsibility for public services. But, lack of stringent regulator and monitoring systems has allowed for rampant corruption. It has hindered past poverty alleviation efforts and will continue to do so since resources meant for public goods or directed towards investments (and so create employment and other opportunities for citizens) are being misappropriated.”

Add the fact of centuries of tribal rivalry and war and you can understand why Nigeria is where it is today.

In the North, there are many Hausa people (Nigerian tribe). It is a much heavier Muslim population. For the most part, the Muslim population in the Northern part of Nigeria is peaceful and follows the teaching of Mohammed and his peaceful ways. However, there is a small sect of Islamic Militants who are enforcing Sharia law (Islamic Law) over the majority through terror and violence. Unfortunately, this group is usually what puts Nigeria in the headlines. This group is called Boko Haram and their name means “ Western education is a sin.” in Hausa.

Like so many religious leaders who have called for violence under the cover of religion, that is exactly what this terrorist sect is trying to do. According to an article written by Rosie Collyer for Nigeria Report in November 24, 2011, “people manipulate the system for political and religious reasons,” she adds. “And the average person either doesn’t understand the system or doesn’t have the means [financial], required to navigate it.” (quote from Remi Atunwa, practicing Muslim and barrister in Northern Nigeria).

According to an article written by Faith Karimi for CNN entitiled “ Boko Haram: A Bloody Insurgency, A Growing Challenge”, “Boko Haram was founded 12 years ago by Muhummad Yusuf. He was killed in 2009 by the military forces. After the killing of its leader, Boko Haram became even more defiant and a new leader for the organization came to power named Abubukar Shekeu.”

As stated before, anyone can manipulate something for different reasons and that is what is happening with Boko Haram and it’s interpretation of Sharia Law. Right now, 9 states in the north are under full Sharia law and 3 states have some form of Sharia law in the Muslim population.

Some may ask, how can the people in northern Nigeria agree to these practices? Most people in the north do not support Boko Haram but there is some sympathy for Sharia law according to Faith Karimi in her article for CNN. She reports that “there is much sympathy because many Muslims in the north see it as the only way to end an inept, corrupt government.”

She goes on to report,” Poverty is prevalent in the North region. The military is trying to halt Boko Harams’s attacks but the group is winning the most important battle: Making Nigerians question government competency.” She continues to report that Boko Haram has been responsible for several attacks in Nigeria ; the most recent ones being in 2011 with a suicide bombing in Abuja (Nigeria’s capital) outside the United Nations building which killed 25 people. In November, several Christian women (pregnant and others with small children) were kidnapped and later returned. And most recently a few weeks ago, Boko Haram was responsible for blowing up a bus station in Abuja and killing 71 people.

As a result of Sharia law, this militant group believes that girls should not be educated and should be married off which led to the capture and abduction of over 200 girls from a government school in Chibok, a city in the north of Nigeria.

The fact that these girls were attending school at all meant that each day they were putting their lives in danger for something that we, in the west, take for granted. With each passing day, the likelihood of the girls returning gets smaller and smaller.

Some parents of the kidnapped girls are afraid to talk to the police for fear that their daughters will be harmed by the militant group. The fact that they are too afraid to talk to the police only strengthens what is already widely known to many Nigerians: they cannot trust the government to do their jobs. But, in turn, without cooperation from the parents to supply any kind of vital information, it becomes less likely for the police to do their job at all. And so, the cycle of ineptitude continues…

In a book I recently read entitled “Every Day is For the Thief” by Teju Cole, a Nigerian author, he says there is a saying in Nigeria that says “idea l’a need” which means “all we need is the general idea or concept.” I saw this many times myself while living in Lagos. When Lagos state instituted a law saying that all okada (motorcycle) drivers and their passengers had to wear helmets, the drivers wore mopping buckets on their heads and the passengers riding the okadas simply held a helmet, bowl or bucket over their heads (who had just had their hair done simply held a bucket over their head without it even touching their heads) because it was the idea that they had a helmet…it didn’t actually have to function. There are so many things like that which I observed happen while I lived in Nigeria.

My hope is that President Goodluck Jonathan does not take the approach of “idea l’a need”.

I hope he doesn’t think just by doing his one press conference on Sunday that he somehow fulfilled the concept of what a president should do to help his people and will actually be a functioning president to do something to get these girls back to their homes. The whole world is his stage right now, and we are all watching this performance unfold. It is time for the government of Nigeria to show the world it can function and that it cares for its people and their desperate needs. It needs to function to protect its children.

These kidnappings are a cry to the world that the people in Nigeria are desperate, and if the Nigerian government ignores the poverty and ineptness in its government too long, the people of that country will only see what they already know in their hearts. They will witness a government that is there in concept only and not really there to take care of its people.

For more information on what you can do to help, see our previous post, Standing in Solidarity to #BRINGBACKOURGIRLS.

What are your thoughts on what is happening in Nigeria? Anything you’d like to add to this post?

This is an original post by Meredith. You can check out Meredith’s life as an expat in Nigeria and her transition back to life in the U.S. on her blog at www.wefoundhappiness.blogspot.com/

Articles used in the writing of this article include:

“Every Day is for the Thief” by Teju Cole (novel)

Like Loading...
« DEMOCRATIC REPUBLIC OF CONGO: Some Things Sound Better In French
What I Learned From A Tragic Child Sex Abuse Case »