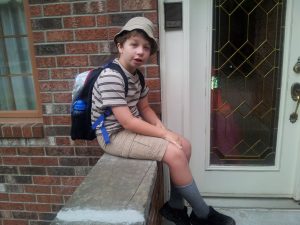 A few months ago, my older son George turned ten. I felt a sense of wonderment at the fact that I had actually succeeded in keeping a human being alive for an entire decade. To put this into perspective, let me just say that as a kid I ripped the limbs off my dolls. I was not exactly a poster child for parenting potential. I know more than a few people who might legitimately be surprised that I’ve been more-or-less successful as a mother.

As George blew out his birthday candles, though, I also felt a jolt of terror. These ten years have gone so quickly, and in just eight more short years, my firstborn child will be nominally (although probably not academically) ready to graduate high school.

But wait! Before that even happens, before we have to make scary decisions about adulthood and post-school life, we have to navigate the stormy teenage years – a period that I don’t think any parent looks forward to, never mind the parent of a child with autism.

Almost as soon as the thought of adolescence crossed my mind, I started to see signs of early puberty in George. I was helping him dry off after a shower one evening when I noticed that he had started sprouting hair where previously there had been none.

Oh. Now that was a shock. One day, I’m thinking that I have a couple of years before my child starts to turn into a man-boy. The next day, I’m at my computer Googling a search string that includes the phrase, “pubic hair”.

As if that wasn’t enough, my gentle-natured child has suddenly developed an air of defiance. As he was playing games on his computer a few nights ago, I asked him to put on his pyjamas. I expected him to comply, but instead he looked me dead in the eye and said, “No!” before turning back to his game.

“George,” I said reasonably. “You have to put your pyjamas on, and then you can have ten more minutes of computer time.”

“NO!” he said, insistently.

I felt my hackles start to rise. My voice rose along with them.

“If you don’t put your pyjamas on right now, the computer will get turned off immediately.”

My sweet, adorable child willfully ignored me and I discovered that it is, in fact, possible for a child to click a mouse more loudly in defiance.

“Right,” I said, meaning business. Autism or no autism, consequences had be enforced.

I strode up to the computer, and ignoring George’s whines of protest, I turned it off. I then shoehorned him into his pyjamas – no mean feat when your long, lanky child suddenly seems to have a dozen arms and legs. It would have been easier to put a deranged octopus into a strait-jacket.

When George was finally in his pyjamas, he was absolutely furious. He stood in the middle of the living room with his face turning red, and he yelled, “Mommy is a FART!”

That’s a pretty good sentence for a largely non-verbal kid with autism. After an initial flash of anger, I felt kind of proud. Then I felt amused. Then I started brooding about what the next few years are likely to entail.

As hard as the autism-adolescence combination might be for me and my husband, it’s not really us that I’m worried about. We’re grown-ups – we can handle it. We did, after all, manage to survive our own adolescent years, and we remember them enough to understand the defiance and the mood swings.

My bigger concern is how much understanding George will have of the changes that are happening in his body. He’s not a kid we can have “the talk” with. We cannot tell him about birds and bees, or why some bits of him are getting bigger and hairier. Well – we can – but it would all go right over his head.

This point was highlighted at an autism conference I attended a couple of years ago. One of the speakers, autism guru Peter Gerhardt, works with teens who have special needs. He told the story of a former client of his, who tried very hard – hurting himself badly in the process – to scratch his skin off his body because the appearance of chest hair was so frightening to him.

The emotional changes are likely to be an even bigger source of mystery for George than the physical changes. His emotions are already a source of frustration for him because of his limited ability to express them. And now, this kid who sometimes feels driven to bang his head on the floor because he cannot verbalize how he feels is going to have hormones flowing six ways from Sunday.

Adolescence is hard enough for typical kids. How much more difficult must it be for a kid with autism who has no idea what is happening or why?

Maybe I’m worrying for nothing. One of my friends says that adolescence and the influx of hormones was the best thing that could have happened for her son with autism.

Whether George has an easy or a difficult time over the next few years, I think we are in for an interesting ride.

How did you/will you approach adolescence with your kids? Do you have any special considerations, like physical or developmental disabilities, to take into account?

This is an original post for World Moms Blog by Kirsten Doyle. Kirsten blogs at Running for Autism, and you can connect with her on Twitter @running4autism.