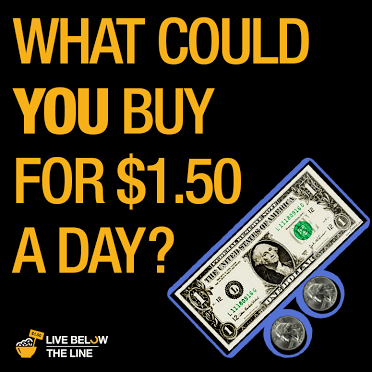 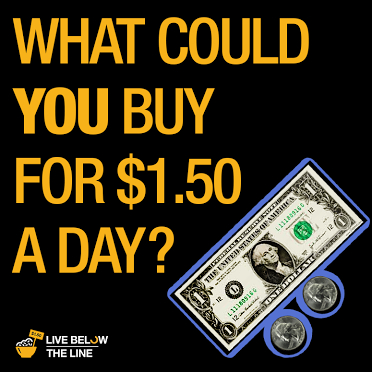 A few months ago, the Live Below the Line of Poverty Challenge contacted World Moms Blog to ask if any of our contributors would like to take their challenge — 5 days of living on $1.50 per day.

According to the World Bank, there are over 1.2 billion people living below the line of extreme poverty in the world, which is defined as living on below $1.25 per day.  The Global Poverty Project is challenging everyone to live on $1.50 per day to advocate for the world’s poorest. They state,

“We run Live Below the Line because we believe to really fight poverty, we’ve got to better understand it.”

Well, I had no idea what I was getting into.  When the request came around cheerleaded by World Moms Blog Senior Editor, Elizabeth Atalay of Documama, I joined in because some of our contributors REALLY wanted to do this.  I remember my friend, Holly Pavlika of  MOMentum Nation, completing the challenge several years ago before she left for Tanzania with Shot@Life.  We were at a lunch for a Shot@Life Champion event in NYC, and she declined her lunch and chose to eat 2 boiled eggs instead.  I, on the other hand, chose the salmon and asked if I could sneak her some.  She explained that she wasn’t allowed to take hand outs on the challenge. I was intrigued…

World Moms Blog Editor, Hannah Ashton, suggested that we pool our resources, my $7.50 for 5 days and her $7.50 for 5 days.  The plan was that amount would buy enough food for 5 days, and then for the one day of our challenge we would eat a fifth of the food.

My rations included 1 bag of beans, 2 cups of white rice, 2 cups of flour, 1 small bag of carrots, 3 bananas, 5 packs of instant oatmeal with dried apples and cinnamon, 1 jar of tomato sauce, some green tea bags and two onions.  We had 12 cents left over each, so we justified a pinch of salt and a tiny bit of oil from our kitchens.

I’ve been sharing my experience on my personal Facebook Page, and I’m going to show you what happened:

Live Below the Line Day 1 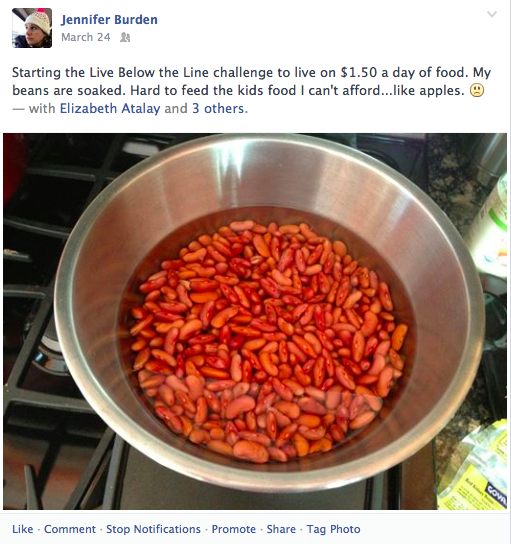 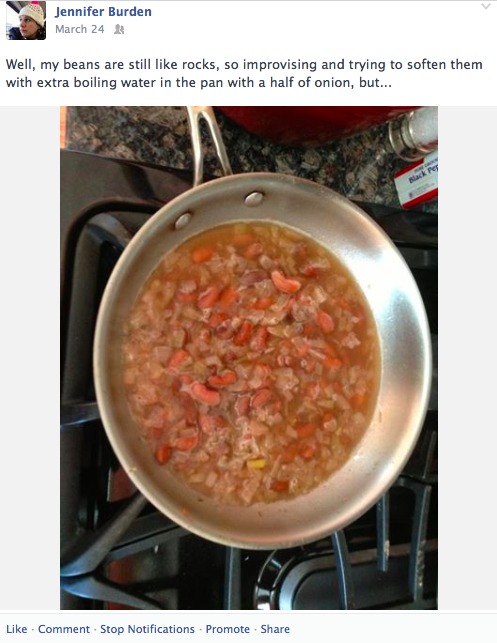 I had two portions of the beans and onions over rice, thinking that I could “anchor” my stomach by filling it. That evening, I had tea and a banana for dinner.  But, I was so hungry when I went to bed.

Live Below the Line Day 2

The next morning I woke up, and realized that there is actually a lot of things I do for my kids in the morning, including making their breakfast, before I had mine.  I was feeling really hungry while running around and getting the laundry started. When I finally made my way to the kitchen, I realized that my oldest daughter had eaten one of my banana rations. I stopped short.

But, that’s the point where the transformation began for me.  It wasn’t just about feeling hungry, I  began to think differently.

“So, this is how it feels for a mom living in poverty?”  Her child is hungry, and so is she.  I left the banana out within reach, so there was no time to cut and share it.

Next, I made my instant oats with boiled water.  My children both wanted to try it.  At home, they are used to oatmeal that we mix with flax-seed and a little mini chocolate chips  to sweeten the deal with some milk.  (For me on the challenge, the flax-seed, chocolate chips and milk were too luxurious today.) So, they were curious.  I shared, although my stomach was growling, and since they weren’t doing the challenge, I thought I could direct them to their lovely 5 grain bread and melon.  But, I thought, “Ok, keep it real.  What would a mother in this situation have to do?”  I let them try the oatmeal.  They didn’t like it.  Relief. I gobbled it up. 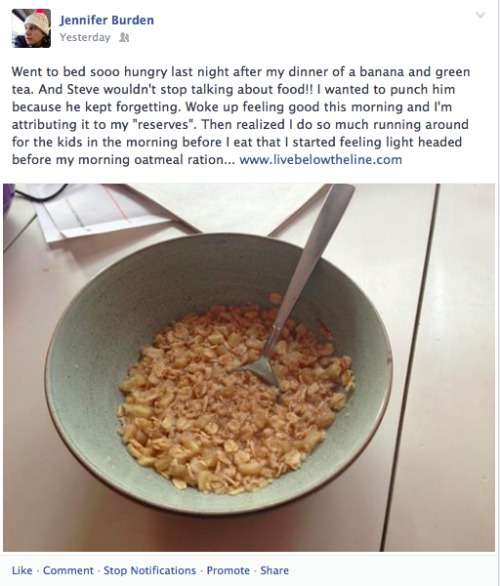 Ok, so I was joking. I really didn’t want to punch Steve, but you know what I mean! He actually wanted to join the challenge at the last-minute, but I told him that I only had rations for one.  Maybe the idea was in my head that this could continue? In the meantime, I had to deal with him eating gourmet pizza, while I was chomping on beans.

So, at this point, I thought, “I’ll do it up through dinner.  I’m hosting book club tonight, and there’s noooo way, I will be able to get through not snacking with my friends.  Book Club is more like “Eat Club”.  I was pretty sure that’s where my journey ended.  Hey, that’s nearly a full day past what I said I’d do, right? But, I guess something in me didn’t want to stop, so I put the request out, “Do you think I should continue?”

One of my friends suggested that she thought I could do it, but why would I want to??  Her question was a pivotal part in my journey.  The challenge was taking a new role.  I spent the morning reflecting:

“I’m understanding in more detail things I have already learned, such as how during a trip to Uganda  with the Shot@Life campaign, we learned that if a father bought a soft drink, that expense meant the family may go hungry. Last night I was just annoyed that my husband mentioned food. How would I have reacted if I was a mother in the situation with the soft drink in places in Uganda?? I’m understanding by feeling instead of just reading and seeing. The places this experience is taking my mind  and my senses is what is keeping me going to want to learn more. I may never know what it’s like to live in extreme poverty, but this challenge is reminding me on another level of why eradicating extreme poverty should be a human priority.

Right now, it’s getting through it and feeling everything, then it will be,  “What can I do about it?”.

Live Below the Line Day 3…

So, last night, I made it through Book Club.  I had beans with onions and tomato sauce over rice for lunch and dinner. I was too hungry to snap a picture beforehand. I had my dinner later in the day, so I wasn’t hungry in the evening when all of the food was out.  My friends were really supportive, nobody held me down and pushed guacamole down my mouth. They had a lot of questions, too.

It wasn’t until my friends left that I began to feel the hunger pangs. I quickly put everything away and left the dishes for the morning.  I went to bed last night thinking, “How do people who make very little money in food service get through their day among all the food?”

The ability to understand advocacy on another level — feeling — is what has brought me to day 3 of what was supposed to be only a 1 day project.

I plan to continue to Friday for the full 5 day challenge, and also look out for an article about all the World Moms Blog contributors who are taking the challenge with Deborah Quinn from MannaHattaMamma  in the UAE; Hannah Ashton, Elizabeth Atalay of Documama, and Polish Mom Photographer in the USA; Alison Fraser of Mom2Mom Africa in Canada; and Purnima Ramakrishnan of The Alchemist’s Blog in India. I’m curious to hear how the challenge went for them!

World Moms Blog wasn’t expecting to fundraise for the challenge, but after requests from friends on Facebook, we have created a World Moms Blog donation page on the Live Below the Line site.  Donations made to our page there will benefit UNICEF, an organization whose great work I observed in Uganda with the Shot@Life campaign.

Want to have an in-body experience to help the world’s 1.2 billion living below the poverty line? How about joining the Live Below the Line challenge, too?  Plan now to start between April 28th and May 2nd. There are site challenges in the US, UK, Australia, New Zealand, Canada and Colombia.

You can help the World Moms Blog contributors with their challenge.  Share this post to help us spread the word about our Live Below the Line challenge!

This is an original post to World Moms Blog by founder, Jennifer Burden in NJ, USA.