UNITED KINGDOM: Learning to Do Better 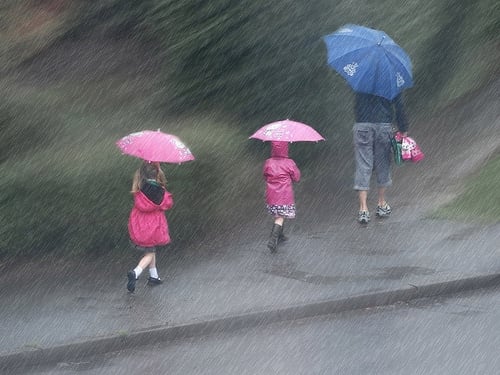 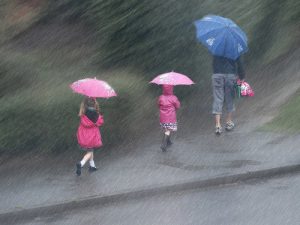 Betty and I are walking to school in the rain. It is a miserable morning – grey, cold and squally. We are tilting our umbrellas sideways to shield ourselves from the gusts of needles thrown at us as we progress along the avenue. I am forcing bright chatter and thinking of the warm cup of tea I will have when I get home.

Betty’s umbrella is white and pink and round like a daisy. It has pretty little petals and yellow stripes, and a bumble-bee attached to the top. The bumble-bee is looking very sorry for himself this morning, buffeted hither and to. I can’t see Betty’s face but I can tell by the drag of her toes that she is feeling sorry for herself too.

I lean down and enquire: “How are you doing, darling?”

Then she asks: “Mummy, did this umbrella used to belong to my big sister?”

“And Mummy, did she used to walk to school with it too?”

A pause. Then, cautiously: “Mummy, did my sister ever used to not want to go to school?”

I can see where this is going now and I give her hand a sympathetic little squeeze. I say yes, there were days when her big sister didn’t really feel like it either.

At this Betty stops and tips back the rim of her umbrella to look up at me. Her eyes are welling with tears. She asks: “And did she used to worry about making mistakes too?”

Betty started school last September at the age of four. She is now four and a half and a month into her second term. She flew through the first twelve weeks with ease – enthusiastic, inquisitive, and keen to try new things. This term, she has cried often on leaving me in the mornings. Afternoons start with jubilation at being home, then slide slowly from relaxation to upset as night approaches.

As soon as I call her for her bath it is her cue to start an hour-long conversation about whether or not she will have to go to school again in the morning.

Now I look at her, looking up at me, her face a mixture of rain and tears, and I think: She’s far too little for all this. I bend down to her and put my umbrella down and hug her. I tell her: “Everyone makes mistakes. It doesn’t matter about making mistakes. The thing is just to try your best. Have a little go.”

But as I’m saying it, I’m thinking that really, I just want to put her in my pocket and take her home. She is not yet five. She shouldn’t be afraid of new things in case she finds herself unable to do them to a standard that will make her happy.

Last term, she learned phonics – how to make the sounds of the alphabet. This term, she has realised that those phonics are letters and that by putting them together and sounding them out she can both read and write. And it terrifies her.

It is Learning with a capital ‘L’. Every day now she wonders what Learning she will have to conquer next.

The British education system is under huge scrutiny at the moment. The coalition government’s Conservative education minister Michael Gove has decided that it needs an overhaul. There is too much emphasis on coursework, so he has decreed the system should revert to a grand slam of end-of-year exams. There is not enough emphasis on rote learning, so reciting dates and times-tables are back in.

So far I have reacted to Gove’s decisions with horror mainly because of the impact they will likely have on my elder daughter, who has Asperger’s Syndrome, and will struggle even more under a system that removes the chance for her to shine via project work. Gove’s reforms are a disaster for Grace.

Now, looking at Betty, who I had expected to skip through the system, I find myself wondering how she will cope. Recently Gove said he was thinking of introducing formal assessments for four and five-year-olds when they enter school in England, in order to be able to monitor their progress.

I care that my children should progress well through the education system, and flourish in their chosen careers. But as I kissed Betty goodbye in her classroom that morning, and watched her teacher take her gently by the hand to distract her from her upset, I thought: there must be a better way to do this.

So – how do you do it, where you live? And do you think it works?

This is an original post to World Moms Blog from our writer in England, Sophie Walker.

The picture used in this post is credited to Roger McCallum. It holds a Flickr Creative Commons attribution license.