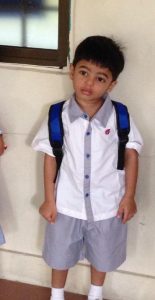 My Little One started school during the New Year, and it was with great trepidation that we approached his impending education. And this was for many reasons…

Second, this was truly his first foray into the outside world. He has lived a very sheltered 4 years, and was always at home with nearly no interaction with peers of his own age. This wasn’t intentional, rather, it just happened that everywhere we lived, the kids were always much bigger than him; and, he was also very shy.

Third, was for ourselves. We really had no clue on how to go about educating a little child. Both of us remember our mothers teaching us, but that was when we were much older. How does one go about getting a 4 year old to hold his pencil and learn the alphabet? What does one do when he says he wants to play now and study later? Do we force him to learn, or just let it go?

Despite our misgivings, our son started school on Jan 2nd, and the first day went okay. The school permitted parents to sit with kids on the first day, and we had a nice time watching the proceedings. The second day was when the waterworks started, and that lasted till last week.

Every morning, he’d wake up even before the alarm, and ask me if it was time for school. It is heart-wrenching to hear that plaintive tone in his voice…but as advised by many, we were not taking no for an answer. Come rain or shine, he had to go to school.

Then came the homework – for the first time, he had to write “A,B,C”,  and we weren’t really sure how to tackle it either. Since neither my husband, nor I, were too endowed in the patience department, we didn’t have such a great time these past 2 months. Most days were filled with screams and cries as we forced the little thing to hold his pencil and write. And you know the funny thing – after we had screamed at him for inverting his Bs or not getting the right slant for his As, he would come up to us after an hour or so, and write a perfect A and B.

I know, we were horrible to him – and our only excuse is that we didn’t want to appear to be too lenient and that he get the impression that it was okay not to want to learn. And I don’t know if it was the terror of the home classes that made it doubly difficult for him to adjust to school, where everything was foreign to him.

You see, we feel like we are living a race now – once we get back home after work, we just have time for a bath and to eat, as Little One must be in bed atleast by 10, so that he wakes up fresh at 7 the next day for school.

But two weeks ago, we made the decision not to pressure him so much – because we were also distressed on seeing his pitiful face every time he had to learn something. We decided that any homework would be finished off speedily by holding his hand and helping him write it, while learning it would be done during the weekends, when there was no pressure on any one.

And I don’t know if it was this decision, or as Little One has made friends and adjusted to school – but since last week, he hasn’t cried at all when going to school. He seems more happy about school, and he keeps singing songs they sing in school. He tells me about the kids in his class (he is already interested in girls) and what he ate and the general happenings in school.

And the atmosphere at home is also different now, with him being happy about school and life in general feels so much more lighter and happier. The lesson I’ve learned from the school fiasco is not to pressurise kids so much that they lose all zest for life. His sad face, and moping around all evening was so depressing, and frankly, I was dreading the years up ahead.

After all, he is just 4 years old, and he is a bright little spark. Let him have his fun and the learning will come slowly.

Have you ever faced a situation like this? What do you do to get your kids to study?