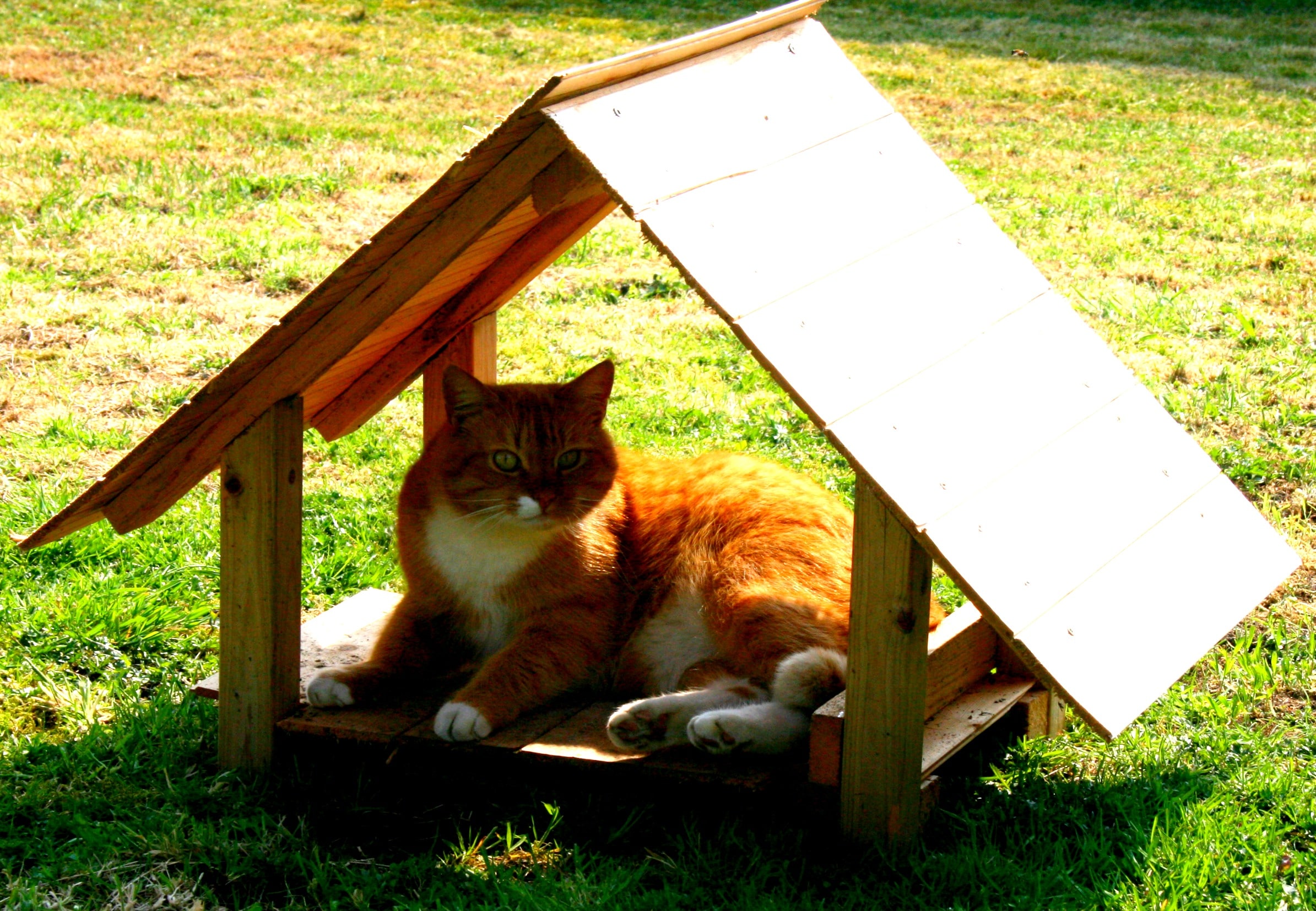 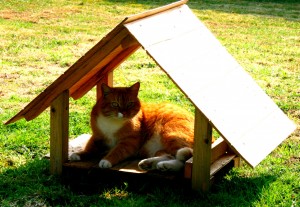 Looking back, I got him when he was still a little too small, so he definitely sees me as his cat-mom. He slept in the Big Bedroom during the first months of his life, with me stroking him upon every little yelp. When he wants to cuddle, he tucks his head in my armpit, as if he wants to get nursed. He’s the cuddliest cat I know. And the best frog catcher as well.

Rino is get-out-of-jail-free card. He radiates reassurance. Peace of mind. When I’m overwhelmed by motherhood, he can convince me to allow the children to come back downstairs after their time-out. He reminds me I prefer talking above time-outs.

When the kids are finally asleep, he crashes the couch with me. There’s nothing like the sound and feel of a purring cat to take the daily stress away. Did I mention he’s fat and orange? The perfect blanket. Matches most of my cloths too.

When our son is having a bad morning, he usually refuses to put on his cloths. He goes on strike on the couch, with his head beneath the cushions. We aren’t able to get through to him nor make eye contact. His sister will try, but she always manages to make things worse. Not her fault, and she earns her credits for trying the impossible.

And then Rino comes pawing in. Takes a few bites from his food and then goes straight for his ‘big brother’. The minute I tell my son who is coming for him, we see his face again. Eleven minutes, fifty three strokes and fourteen cuddles later, he will be dressed and heading for breakfast. The same goes for homework, violin practice and heart break: Rino will drag him through.

When our adopted daughter first met Rino, she nearly jumped to the ceiling. She only knew cats as thieves that should be chased from the orphanage’s kitchen, so she hissed and motioned to get him out, hiding behind my skirts. She didn’t develop a liking for stuffed animals either, with a brother sneaking up on her with those. He didn’t particularly like his new little sister those first months and couldn’t stop scaring her away, so we ended up hiding all the stuffed tigers and cats from them both.

Two years later, their bond has grown. They do continue teasing each other. They fight like little demons over who gets to open the curtains in the morning but an hour later in school the little one will call for her brother when she’s running from kissing boys. They always end up wanting to play with the exact same box of Legos that was untouched for weeks before, but just as frequently, they will team up against me, especially when candy is at stake. I was told that is universal proof they’ve developed a sibling bond.

The same goes for Rino. Our daughter considers him part of the family now. She demands we talk about him with first ànd last name, our family name, and she doesn’t believe it’s fair he’s not allowed to go to the zoo with us. He would love the big cats, you know. I’m glad Rino is visibly terrified inside moving vehicles so in the end our daughter’s more or less convinced he wouldn’t really like joining us.

A few weeks ago, my daughter asked how Rino came to our family. Did he come willing? Or was he taken from his mommy?  After we hesitantly told her it was the latter, she immediately went to find him and whispered in his ear, “You’re just like me!” Ever since, she considers him her little brother even more.

He has become her mirror, in a way. Whenever she’s fantasizing about what she would like to tell her birth mother, he’s a major part of her story. She would like to send her birth mother pictures and drawings of Rino, but not of herself. Pictures of Rino sleeping in the bird house, of Rino coming from the woods when he hears our car approaching, of Rino sleeping with his paws in the air and head to the side, like a wrongly assembled toy.  She wants to tell her all about him.

But most of all, she wants to tell her birth mother that we are such great and loving parents.

For Rino, of course.

Do you have pets that enrich your family? Do they help your children cope with life’s sharp edges? Feel free to share about their funny and serious contributions in your daily life!