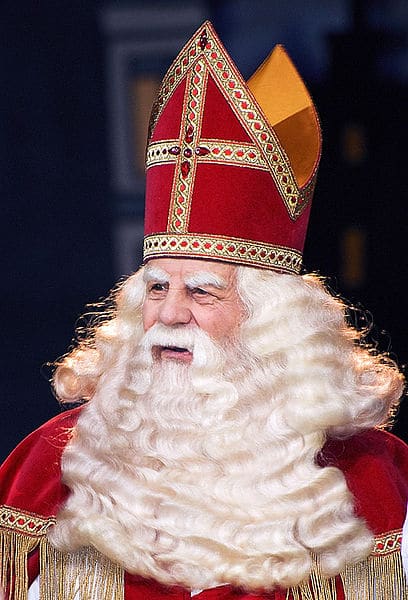 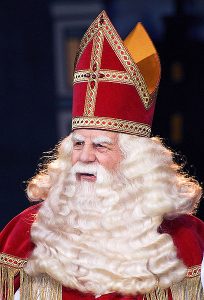 As an adoptive mother of an Ethiopian Panther, I’ve grown an extra pair of antennas when it comes to racism.

Truly, a lot of really nice people distinguish my daughter from other children, based on her color. Even if it is meant to defend her, like calling me disgusting for letting her carry the groceries, it basically still is hidden racism. Should I tell her that people believe she shouldn’t be helping me out because it reminds them of slavery while her white brother is allowed to do the same chores? I’d rather have people call me names than let them wreck my daughter’s self esteem.

However, as I’m writing this, there is a HUGE racism debate going on in Belgium and even worse in The Netherlands, where it all started. And despite my racism antennas, I just can’t fully agree with the racism-yellers this time. Not even if they yell all the way from some United Nations office.

The debate is all about the ancestor of Santa Claus: Sinterklaas. You can read here about how Santa Claus evolved from our Sinterklaas, or Saint Nicholas, who is actually believed to be Turkish, who resides in Spain, has a white horse called Bad-Wheater-Today (Belgium) or Amerigo (The Netherlands), and celebrates his December birthday by coming over to our countries and surprising children with presents.

In the Netherlands he comes over on the evening of December 5th. Later that night, he comes to Belgium and delivers toys and sweets to be found in the children’s shoes on the morning of the 6th. It’s really a children’s celebration, full of magic and anticipation. You will bump into him just about everywhere during November.

Now, because Sinterklaas is getting old and forgetful, and has a lot of work to do within 24 hours, he has helpers. These helpers are all black, and hence all called ‘Black Peter’ (Zwarte Piet).

And that’s where all the accusative fingers point.

Indeed, this tradition can be seen as offensive. I, for a fact, believe it is partly based on a slavery and stereotype-loaded past, and a lot of people agree with me. Black Peter has long been depicted as a bit slow, barbaric (kidnapping and hitting the naughty children), dressed in clownish clothes, with stout lips and being submissive to his white boss.

Of course I agree this is an awful, insulting picture to brainwash our children with during the big Sinterklaas-Awaiting-Month-of -November. I also agree an outsider would be shocked, when he meets Sinterklaas and his Black Peters for the first time, especially if oblivious to the folklore. And I honestly understand and feel the offense people take.

For me personally, Sinterklaas has me cringing with bittersweetness ever since I found out about his racist taint. I’m not even particularly fond of the Sinterklaas tradition anymore.

However, I also don’t agree that we are teaching our children racism, nor paying ode to slavery by honoring this tradition every year. Not any more, that is.

Since the 1990’s, we have a children’s holiday special on TV portraying the real story. Children are elegantly taught Black Peter is black – and not brown/colored/african – because he came down the chimney. No more, no less. Nobody really tries to explain why his clothes didn’t get black during his journey down the chimney.

It is just part of the mystery, just like Bad-Wheater-Today walking on rooftops or Sinterklaas having this enormous book in which the good and bad behavior of every single child is listed. It doesn’t make sense, but children buy it anyway.

In this TV-special, Sinterklaas is depicted as a bit senile. In fact his Black Peters are now the smart ones, all with different names according to their function or character. A bit like the Smurfs, and everyone likes the Smurfs, right?

For the past 20+ years, this  special comes on every November. Along the way, children started to grow more afraid of this very strict and grumpy old man than of his joyous, candy throwing helpers. The Black Peters became the true friends of our children. And every Belgian child you ask about Black Peter’s color now, will patiently tell you the chimney-story.

To me, this shows our tradition is evolving from, I admit, a racist past, towards a new story. Just like it evolved into Santa Claus overseas—who, by the way, appears to imprison a whole lot of innocent, little people in a Siberia-like, harsh environment without paying them for their round-the-clock labor.

Therefore, I trust society may even evolve towards a tradition of White Peters in a few more years or decades. After all, with more and more houses being built without huge chimneys, we will sooner or later find out that Peter’s color is fading, won’t we?

I’m hoping that by the time this post runs, all the petitions –pro and con–the social media frenzy, any UN investigations and any public manifestations, will be over and done with. I truly hope no-one got hurt along the way, and that both camps have reached a certain level of understanding towards each other by the time Saint Nicholas wants to celebrate his birthday.

Because, you know, my children are already expecting Sinterklaas to send one of his Peters down our chimney on the 6th of December. Especially my very dark daughter is impatiently awaiting. I’d hate to disappoint her if he decided not to come this year, because he’s afraid to be called a racist. She would definitely not understand, mainly because she doesn’t see any resemblance between Black Peter and herself.

I’m confident Sinterklaas will make it, though. We are both alike, Sinterklaas and me. We’re already used to people calling us racist slave handlers. And we both know better than that.

Did you know about Santa Claus’s European past? How would you feel if he had black helpers instead of elves?

The picture in this post is credited to Sinterklaas Himself, who published it on Wikipedia, while undercover as Gaby Kooiman, under GNU Free Documentation License.