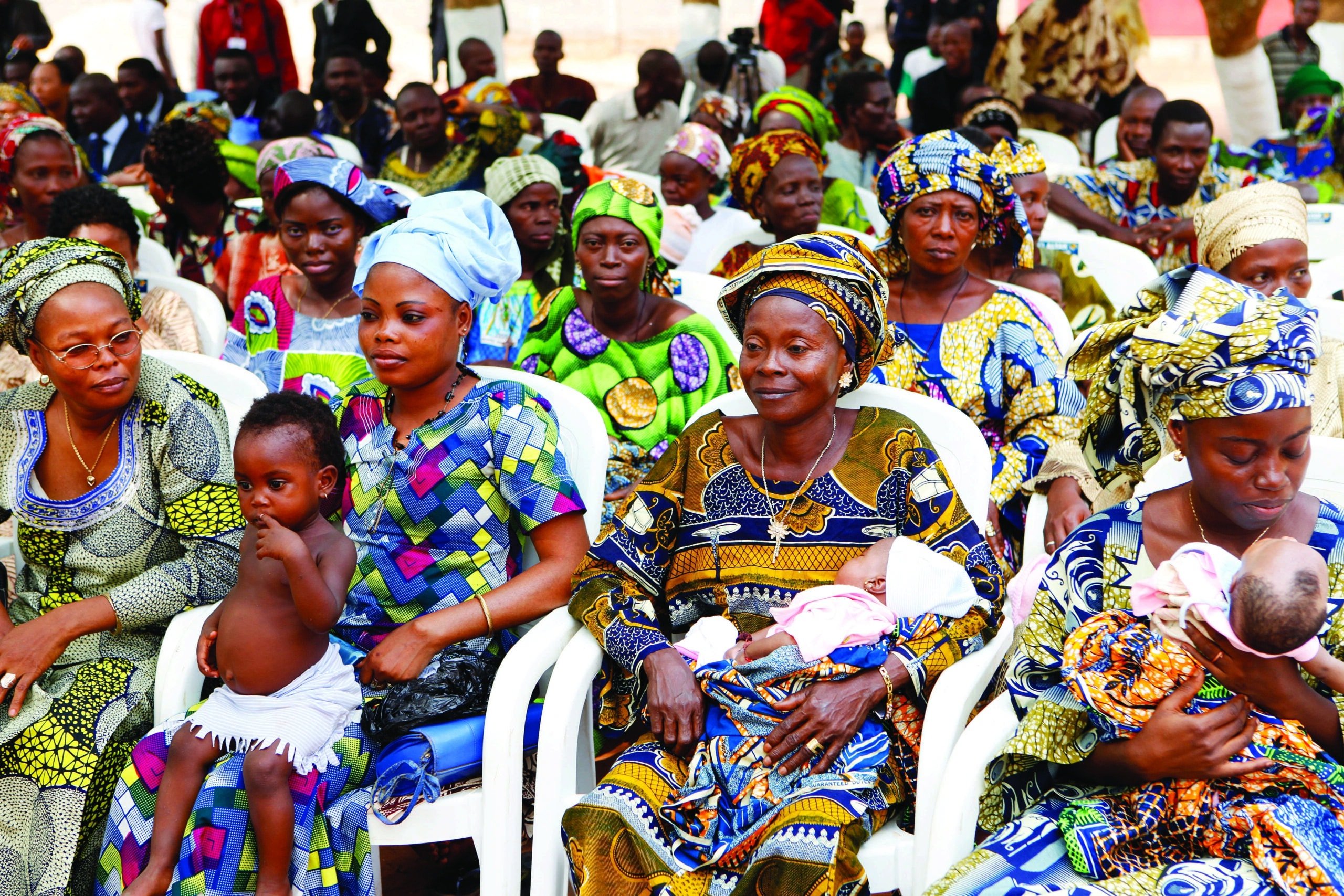 SOCIAL GOOD: The Beginning Of The End Of AIDS? 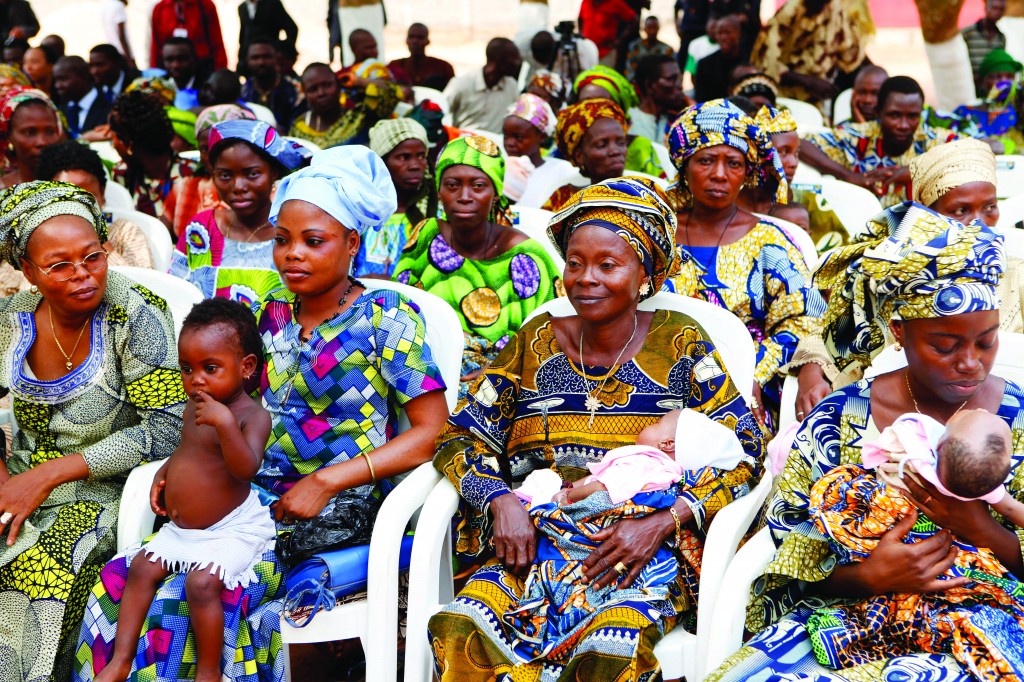 A community meeting of HIV-positive women who have benefitted from prevention of mother-to-child transmission (PMTCT) services and health counselors in Dangbo, Benin. Through the expanding availability of these services, it is now possible to imagine a generation of children being born free from HIV.- photo credit The Global Fund

Optimistic news was released today in the annual accountability report on AIDS  by ONE.   The highlight is that the  sweeping statement “AIDS in Africa”  has now become obsolete.  African countries are shown in this new report to have made such widely varied progress in the fight against AIDS that the generalization of the continent as a whole no longer makes sense.  At this point there are 16 countries in Sub-Saharan Africa that have reached the tipping point of being at the beginning of the end of AIDS. At the same time, other countries are still far behind in the struggle against the disease.

On the 25th World AIDS Day marked on December 1st of 2013, ONE’s new report on the global AIDS fight shows we are closing in on the tipping point.

According to ONE’s 2013 analysis: If current rates of acceleration continue, we could achieve the beginning of the end of AIDS – when the number of people newly added to treatment surpasses the number newly infected with HIV by 2015

Ironically, the AIDS fight has lost some political momentum because of its many successes. Because it is no longer perceived as a global health emergency, but rather a chronic and manageable disease, the fight has lost some of its political momentum. Along with the financial commitment, political leadership at the national and local levels has proved to be essential in driving real gains across the continent.

The three key targets outlined in the report where world leaders should focus significant attention in order to make headway against the disease are:

The data in the assessment breaks down the progress of  nine African countries and where they stand in meeting the 2015 goals:

leading the Way: Ghana, Malawi and Zambia are great examples of how international donors, national governments and key civil society leaders can work together to achieve accelerated progress in the fight against AIDS. Zambia and Malawi entered the decade with two of the world’s most widespread, crippling AIDS epidemics. Today, they – along with Ghana – are the world’s leaders in ending the epidemic, having made swift and steady progress over the last few years. All three countries have committed significant national resources for health, have reached and surpassed the tipping point at the country level, and are making even further headway towards the control and defeat of the disease.

ones to Watch: South Africa, Tanzania and Uganda have shown real dynamism but erratic progress as they face massive disease burdens, shifting political landscapes and unique, country-specific challenges. These countries have made significant strides in recent years, but their progress has been slower than in the leading countries. South Africa and Tanzania hit the tipping point for the beginning of the end of AIDS for the first time just last year, and Uganda – with an AIDS ratio of 1.1 – is close to the tipping point but has yet to reach it. Given unsteady progress against the AIDS epidemic in recent years, how these countries move forward in the next 1–2 years will be crucial.

Urgent Progress needed: Cameroon, Nigeria and Togo have not made enough progress, having often been hampered by a lack of political will or competing political priorities, insufficient financial commitments, inefficient delivery systems and a lack of specific attention to prevention. Togo, in particular, had reached the AIDS tipping point in 2010 but has slipped back since. Meanwhile, progress towards the beginning of the end of AIDS has been largely stagnant in Nigeria and Cameroon, albeit with dramatic year-to-year fluctuations in the AIDS ratio. These countries, and others like them, must show a serious acceleration of efforts to achieve the beginning of the end of AIDS by 2015. 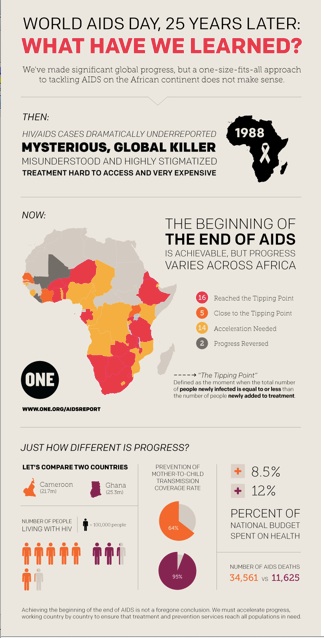 Despite the overall positive progress made in the fight against AIDS the momentum needs to continue to win. Prevention of new infections is key, transparency in reporting, political involvement, targeted resources, and keeping the AIDS issue in the forefront of the global agenda are all critical to the success of this campaign.

This is a big week for the AIDS community, with a hugely successful (RED) auction this past Saturday night, the 25thWorld AIDS Day, and the Global Fund replenishment. The (RED) auction on Saturday raised $13 million which was matched by Bill and Melinda Gates for a total $26 million for the Global Fund. Let’s keep the momentum going!

To learn more you can read the full report  here.

Co-founded by Bono, ONE is a campaigning and advocacy organization of more than three million people taking action to end extreme poverty and preventable disease… because the facts show extreme poverty has already been cut in half and can be virtually eradicated by 2030.

ONE does not ask for your money, but for your voice.

Find out more at ONE.org

This is an original World Moms Blog post written by Elizabeth Atalay of www.documama.org. All information comes from The Beginning of The End? Tracking Global Commitments On AIDS Volume 2 ONE Data Report.

A community meeting of HIV-positive women who have benefitted from prevention of mother-to-child transmission (PMTCT) services and health counselors in Dangbo, Benin. Through the expanding availability of these services, it is now possible to imagine a generation of children being born free from HIV.- photo courtesy of ONE.org