“From Technicals to Tummy Time:  Inside My Decision to be a Stay-At-Home Mom”

Rebels, instability, armored vehicles, curfew, and no-go zones.  Four short years ago, those words dominated my daily life.  Fast forward to today and it’s diapers, infant Tylenol, Boogie Wipes, potty training, and “Dinosaur Train.”  I think we can call that a pretty significant life change.  Was it one that I saw coming?  Not at all.

My husband and I always knew that we wanted to have children – definitely two and probably more.  We were excited about traveling the world with them, raising them abroad, and teaching them about the importance of being open, understanding, and tolerant of other cultures.  Our Foreign Service lifestyle was perfect for this.  At the time I became pregnant with my first, we had already lived in Africa, Asia, South America, North America, Australia, and the Middle East.  We were looking forward to the adventures that lay ahead with a family in tow.  We could have a family, continue our careers, and introduce our children to so much of the world.

All the while, I could remain doing the very unique and powerful work that had defined not only my career, but me as a person. My role included participating in demining campaigns along the Mozambique-Tanzania border, serving as an independent observer in Mozambique’s local and national elections, barring Venezuelan drug dealers from entry into the United States, visiting and speaking with rebel groups and refugees in Darfur, Sudan, and being baffled – ad nauseam – by the lack of progress in U.S.-China climate negotiations. 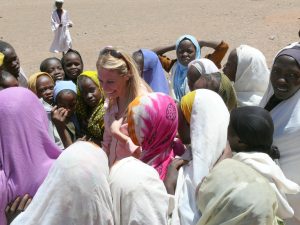 I never thought much about leaving my career to be a stay-at-home mom.  Before I was pregnant, a distant family member lambasted me for entertaining the idea I might continue my career after children came along – a judgment which deeply offended me (and still does).  Working as a U.S. diplomat, and perhaps becoming an ambassador, is always what I had wanted to do. I didn’t believe working full-time and being a mom were mutually exclusive (and for the record, I still don’t).

My dad – a captain for Pan American Airways – and my mom – a flight attendant for National Airlines – continued to work after I was born for several years, carefully arranging their schedules so that one of them could be at home with me while the other was away. Why could my husband and I not continue our careers in the Service, alternating times we might need to work late to accommodate receptions and presidential visits, and raise our family in the way we wanted to?  We could.  So it was with that mindset I worked until the day I delivered my first baby. In the final weeks before delivery I worked until midnight, defining U.S. South China Sea policy – assured that I would be back to work after the standard three-month maternity leave period ended.

However, after the birth of our son, something changed for me – something visceral; something very basic.  Once I held our baby in my arms, it became clear to me that no visits to U.S.-funded rural hospitals, Darfur peace negotiations, or U.S.-China strategic dialogues could convince me to be away from him.

While I had loved my job, my calling in life had changed to raising him – and other children we might have – in the best way that I could, making myself available to him as often as I could.  I had changed my mind; my whole outlook on my career, and pretty much – life. I resigned from the U.S. Foreign Service and became a stay-at-home mom.

My husband and I were extremely happy with the decision, but there were many others that weren’t.  My own dad called me a quitter and repeatedly voiced his “disappointment” with my decision.  “I thought you’d be an Ambassador,” he said.  At work, others tried to call my bluff.  Why would I quit my career with the seniority I had accrued?  That wouldn’t make any sense, right?

I write this not to judge others for their decision to continue to work after the birth of a baby – only to share my story.

I, so dedicated to work and ambitious in my career goals, chose to walk away from it all after our son was born.  It was a decision that shocked me.   It was not something I saw coming – not even at 39.5 weeks pregnant; yet, this was something that was crystal clear when I became a mother.  I realize how important it is for parents to make their own decisions about work/life balance.  Many moms, several of my closest friends included, feel the need to balance work and parenthood equally.  I admire them for the ability to juggle both so beautifully and successfully.  I also realize that many families cannot afford for one parent to choose to stay at home.  To those families, I have the utmost respect, because I can only begin to understand how hard it might be to want to stay at home with your children, but not be able to do so.

Parenthood, motherhood, fatherhood – they change you.  You might choose to remain in your same working pattern, but you will have become a more sensitive soul.  You might decide that a Saturday trip to the park is far more enjoyable than dining at your favorite brunch spot.  And you will begin to cherish sleep more than you ever thought possible.  Welcoming a baby into your life is powerfully transformative.  Things you never gave a moment’s thought to before become incredibly important – and may even change your path, and that of your children.

So, what changed for you?

Loren Braunohler and her family moved to Bangkok in November 2010.  A former U.S.diplomat who served in Mozambique, Venezuela, Sudan, Washington DC, and Thailand, Loren resigned from the U.S. Foreign Service in July 2011 to be a full-time mom to son Logan, now age three and daughter Katelyn, age fourteen months.  When parenting permits, Loren is a freelance journalist and regularly contributes to Travel+Leisure Southeast Asia, CNN Travel, and Bangkok Mothers and Babies International Magazine, among others, and guests blogs for premier parenting websites such as World Moms Blog.  In 2012, Loren started Toddle Joy, an online blog and resource for expat parents of young children who are new to Thailand and the region.

Samples of Loren’s work are available on her website www.toddlejoy.com. Photo credit to the author.