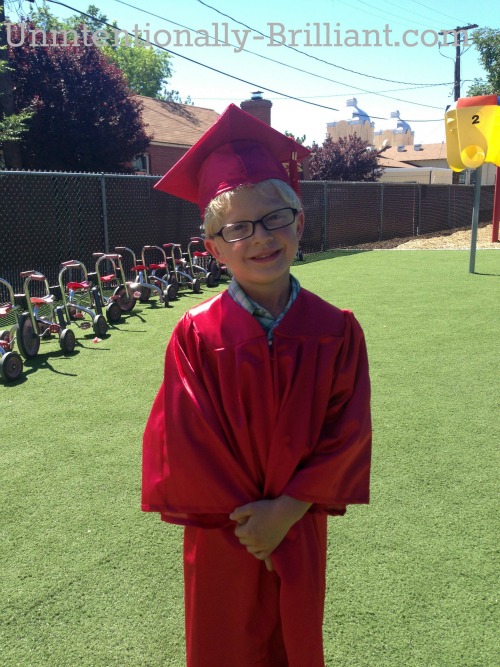 Earlier this month I attended my son’s graduation ceremony. He looked so handsome in his bright red cap and gown, smiling proudly at all he has accomplished. He clutched his little blue diploma when they called his name, and I was overcome with emotions that felt out of place. Especially considering the fact that my son had just finished Kindergarten.

My son’s school had a graduation ceremony for the kindergartners. This has become a popular event across the United States, and I have to admit to being one of the ones who scoffed at the idea.

Graduation, or commencement, is typically saved for those graduating high school (grade 12) or college. Not five- and six-year-olds who are simply moving into the first grade. It seemed silly to spend $17 (a bargain compared to what I paid when I graduated college almost 10 years ago!) on a cap and gown for something that seemed so…ridiculous.

But then I got to thinking about what this ceremony actually meant for my son and his classmates, and I came to accept that it was something worth celebrating.

Of course, that small class size was the exact reason I kept paying for private school, rather than switching to public for Kindergarten. I was willing to pay so that my son would have a more personalized approach to his education. He thrived in that class, with that wonderful teacher who was able to cater to each of her 9 students and their individual learning styles. He entered that class already knowing how to read, so Miss L gave him the chance to practice by allowing him to read aloud to the class on several occasions. She planned additional activities for him, knowing that he was ahead of the other students and finished the assigned worksheets quicker. She kept him from getting bored in a classroom that was just a bit below his level.

I am sad to see that this school won’t be offering a Kindergarten class any longer, but I am eternally grateful that my son was given that opportunity to develop a real love for school.

Switching to a public school with much larger class sizes will be a bit of a culture shock for my son, but I have learned from Miss L some ways that I can cater to his learning style outside of the classroom. And in a larger class, it is more likely that he will not be so far ahead of everyone else. There will be other children on his level.

And so, I have come to accept and love that we were able to gather together and celebrate these wonderful children who will be the last graduating Kindergarten class from this particular school. It is a true commencement for them, as they venture off to different schools (my son is – unfortunately – not zoned for the same school as any of the children in his class). They are not simply moving from the Kindergarten room to the first grade, as would happen were they already in a school that offered classes beyond Kindergarten. They are moving to an entirely new environment.

And I know that they will all thrive. They will do wonderfully. I have gotten to know each of those 9 children, and some of their parents, over the past two years at that school. I am proud of their accomplishments and how much they have all grown over the years. They have made large strides, and I am proud to celebrate their graduation.

Even if seeing 9 five- and six-year-olds in caps and gowns was just a little silly looking.

Does your country celebrate a commencement for younger children? How do you mark the transition from one school to another?

Photo courtesy of the author.