Today’s post is a continuation of a South American birth story from our contributor in Brazil, Eco Ziva.  Click here for part one  and part two of her birth story on World Moms Blog. 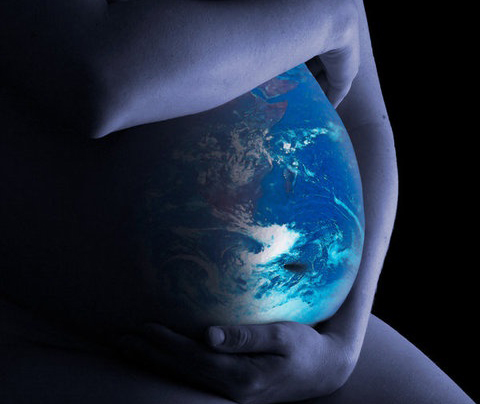 Coincidence or not, about five minutes after the encouraging message the contractions began. At first I didn’t want to admit they were contractions – not even to myself. It is true that they were different from any kind of contraction I had felt before. They were restricted to a small area of my lower abdomen and were less painful. By then my husband had already filled in the tub and after a while I finally accepted I was in active labor and agreed that he turn on the water heater.

The warm water calmed me and I managed to get all thoughts out of my mind. The fear was completely gone. I soon figured out that each contraction lasted exactly the time it took for me to mentally recite four prayers I knew by heart due to my Catholic upbringing: Our Father, the Hail Mary, the Guardian Angel and the Saint Germain prayers. I used that as a meditation and it made the contractions quite bearable.

What was happening around me is all jumbled in my mind and I don’t really remember. I know that our daughter had become fully awake, while our son completely blacked out no matter how much his father tried to wake him. My husband was also running around back and forth organizing things (I think).

The midwife arrived at around 11:30 p.m. with her daughter (an apprentice midwife), a doula, and her sister, an acupuncturist. After talking with them for a while I reluctantly left the water to be examined. The baby’s heartbeat was fine and I was 7 cm dilated.

Since my daughter’s labor had progressed a bit faster I was slightly discouraged thinking I still had another hour or so before reaching full dilation. However, at this point the midwife asked permission to try something new with me. She (who is also an acupuncturist) and her sister had recently learned a way to diminish the pain in labor and I would be the first they would try it on. They also wanted to try a technique where I would push as little as possible and let the baby come out softly in order to avoid tearing (this was due to my big babies and the enormous tear I had the previous time).

No, the pain did not diminish (much to the contrary!). Yet what happened after she placed the acupuncture needles was equally amazing. Things sped up considerably and in two or three contractions I felt like pushing. Not only did I feel like pushing but I couldn’t help it – so much for letting the baby come out slowly! Differently from my previous labor processes, where the pushing phase felt much more like a need to go to the bathroom, this time these contractions were quite painful.

During my daughter’s labor process I held back for a while during the pushing phase because I was afraid of tearing. This time I just wanted to get it over with and see our son. Not simply get over with labor – I wanted to put it all behind me, all the months of illness after illness, all the fear, and now the pain.

At some point our daughter (who was watching everything outside the tub, right behind me) started crying, I guess from all the faces I was making as I pushed. I reassured her mommy was fine and my husband picked her up.

I pushed so hard I began to feel my blood pressure drop as if I was going to faint. I asked for the water-honey mixture my husband had prepared while the midwife pressed an acupressure point straight below my nose, and I soon felt better.

I checked to see how far the baby was from crowning and was once again discouraged when I felt the head about 10 cm away. The midwife reassured me that it wouldn’t take long for him to descend and in the next contraction I pushed with all my might. I checked again and the seemed the distance seemed to have decreased by half.

Amidst all this, everyone in the room was singing a beautiful song that talked of world peace, union and love. What a wonderful way to welcome a new being onto this planet! Over the next days this song was in my head, and every time a warm feeling came to my heart, along with a wish that more children could come into the world in such a loving, harmonious way. I truly believe it would contribute to a more peaceful Earth.

Two or three contractions later he emerged. It was 34 minutes past midnight. I remember the first words the midwife told me, smiling, were “You broke a record!”

I asked if the cord was around his neck and she said yes and removed it. Then he came straight to my breast. I had felt a great sense of relief and contentment after my two other children were born – even after the C-section, but nothing can be compared to this time. All of a sudden I felt like a completely new woman, fearless and full of energy, and who seemed to never have been ill or in pain.

After the cord stopped pulsating, my husband cut it and we waited for the placenta, chatting excitedly. I had thought of having a Lotus birth, but after so much havoc I realized now I just wanted to rest. I donated the placenta to the midwife as she uses it to make homeopathic medicine.

All in all – despite the initial fear and panic – it was a wonderful birth, a great gift after such a difficult pregnancy. As I finish writing this our beautiful baby boy (the best gift of this entire story!) is sleeping peacefully next to me.

This is an original post to World Moms Blog from our mother of three in Brazil, Eco Ziva.