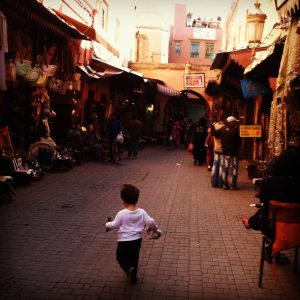 My mom loves to tell stories about her girls…to anyone who will listen.  One of her favorites is about my first plane ride home from her native Peru.  At age 6, as I sat in the window seat watching Lima fade away beneath us, I turned to her and said (with wisdom far beyond my years my mum will add) “the trouble with Peru is that the Peruvians don’t take good care of it.”

Admittedly it is one of her less embarrassing stories, better by far than the one that has me passing most of a Greek holiday with a potty on my head.  And lately, as my son gets older, I’ve been thinking more about it.

By the time we leave Morocco this fall, he will not quite be three.  Throughout our time here, that fact made me sad. There is likely little if anything that he will remember about our year in Morocco and our travels in North Africa. But now, this has also made me slightly grateful.

I have started to see the cogs turning in his little head when we pass the women begging on the street, with toddlers his age strapped to their backs.  I see him watching the kids selling cartons of tissues at the stop lights as I guiltily roll up the window.

As his little eyes observe more and more I am starting to be glad that we will leave before the questions start.  He hasn’t progressed much past the basic two-word toddler interrogatives: dada gone? more biscuit? But I am imagining the questions forming, and I need more time to come up with good answers.

When he asks me about these babies on their mothers backs, or the ones selling on streets, what do I say? Moreover, how do you explain your own role in the perpetuation of this inequality.  How do I explain that being asked for the 19th time in one day to spare just 1 dirham irritates me more and more in spite of the fact that had I given one each time, I would now be short only $2? How would I explain that the shoes he’s wearing would cover our gardeners weekly salary?

Observant though I might have been at age 6 about the socio-economics of Peru, it did not give me any head start on figuring out any actionable recommendations for the Peruvians about how to improve their problems of poverty, inequality, pollution.  Nor do I have any for Morocco now, some 25 years later.

I am a big believer in my own and my son’s capacity to save the world. I take part in fundraising campaigns, donate to charity and volunteer.  I will always encourage him to live a life of tolerance, patience and understanding.  But when you live in the midst of an unequal society – to what extent are you compromising your principles by continuing to live in the manner to which you are accustomed?

So while I doubt that I will ever come up with any Nobel Peace prize winning solutions to global income inequality myself, I would at the very least time to come up with a way of explaining poverty to my son.  I would like to be able to explain to him that he is lucky without teaching him conceit or entitlement. I would like to teach him that our relative wealth comes with a responsibility to those less fortunate in such a way that empowers and doesn’t leave me stinking of rank hypocrisy when I look away from the outstretched hands on the street.

How do you teach your children about income inequality when you are living on the “have” side of an unequal society?

This is an original post to World Moms Blog by our contributor, Natalia Rankine-Galloway, who writes at The Culture Mum Chronicles.  She is now writing from the U.S. Embassy in Morocco.