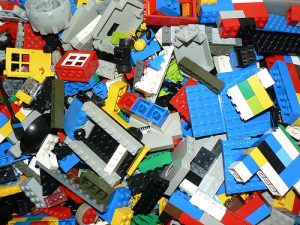 It is a truth universally acknowledged that every parent has experienced the pain of stepping on a Lego. Some day, hundreds of thousands of years from now, archaeologists will discover our perfectly preserved bodies and wonder what those evenly spaced circular dents on the soles of our feet are.

The first time I had a serious run-in with one of my kids’ toys was when my younger son James was two. I got up in the middle of the night to go to the bathroom, and I walked smack-bang into a toy truck. If the truck had been made of plastic it wouldn’t have been so bad, but it was made of metal.

My foot connected with a sharp corner of the truck and I got a fair-sized gash. Because this happened during a rare moment in which both kids were asleep at the same time, I couldn’t howl in pain and hop around on one leg. I had to just stand there and bleed quietly.

Five years later, I still have a scar on my right foot. And James still has the offending truck. In fact, both of my boys still have just about every toy they have ever owned since the day they were born. My attempts to get rid of some of them have not gone well.

The first time I tried to clear out old toys, I enlisted the help of the boys. I had this charmingly naive idea that if I involved the kids in deciding what to keep and what to throw out, I would have their buy-in, and consequently, their cooperation. The theory was good, and at the beginning of the exercise, things looked promising. We emptied out toy boxes and started separating things into two piles: the Keep pile and the Throw Away pile. The boys seemed to be quite enthusiastic about this process, and I was excited about the prospect of reclaiming some of my living room space.

Two hours later, though, my spirits started to sink. We were making painfully slow progress because the kids kept on playing with every toy they picked up. And when I looked at the two piles, I noticed an imbalance. The Keep pile was growing so fast that it would soon qualify as a hill, and the Throw Away pile had about three things in it.

It was clear that this was not going to work, and since we were eating up precious weekend time, I decided to ditch the whole idea. Things got tossed randomly back into the toy boxes, and after a couple of weeks I tried a different tack. I waited until late at night, when I was sure the kids were sleeping, and as quietly as I could, I gathered a box of toys that I had not seen the kids play with for at least a year. I had the brilliant idea of sneaking the box into the back of the van, from where they could be easily deposited at the Salvation Army store the following day.

Sneaking toys out of the house is like trying to smuggle balloons filled with cocaine. Your chances of getting caught are virtually 100%, and when you do get caught, the fallout can be frightening. Hell hath no fury like a small child whose toys are being stolen.

Just as I was creeping out of the living room with the box of doomed toys, my younger son wandered through on his way to the bathroom. Even in his groggy, not-quite-awake state, he knew instantly what was going on. The tantrum that followed was ugly, and for weeks I had my then six-year-old admonishing me about the sins of taking other people’s stuff without permission.

My next tactic will be along similar lines to the last attempt, but I will go to the lengths of taking a day off work. On the designated day, I will leave the house at my usual time, to trick the kids into thinking that I am going to work. After the husband has packed them off to school, I will return, and for the next six hours I will declutter like a demon. When the kids come home from school, they may notice that the place looks tidier. But they will not know what is missing, because I will only get rid of stuff that I know they don’t use anymore.

If this plan fails, I may have to run a bulldozer through my living room. Either that or I will have to burn the house down.

Do you have the same problem with toy-clutter that I do? How do your kids react when you want to get rid of their old stuff?

This is an original post for World Moms Blog by Kirsten Doyle of Toronto, Canada.  Kirsten can also be found on her blog, Running for Autism, or on Twitter @Running4autism. You can also connect with her on Facebook.