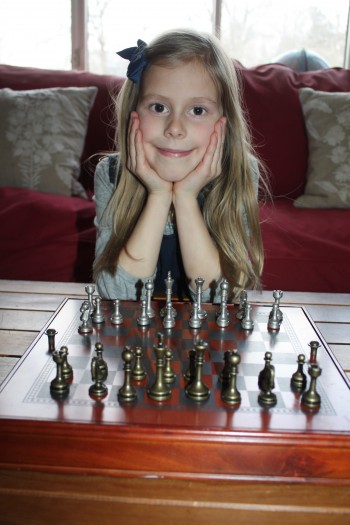 A daughter takes the imprint of what it means to be a woman from her mother.  William Ross Wallace’s poem “What Rules the World” has the famous line,

“The hand that rocks the cradle is the hand that rules the world,” which extols motherhood as a paramount force in molding the character of a child.

A child will travel through a series of developmental stages. Many world traditions acknowledge the seven-year cycle in human development. In the Jesuit tradition a child is said to have reached the age of reason by age seven.

The first cycle is from birth to seven years of age. The beginning stage sets the foundation for the remainder of your child’s life. The early years influence the health and well-being of a child and will have an impact on them throughout their lifetime.

My older daughter is now in what some would say is the age of reason. She is 7 ½.  I’ve read that at age seven a child’s brain has developed enough to take on abstract and symbolic reasoning.  My own observation is that by age seven her thoughts and questions have developed an interesting level of depth.

The changes in the first cycle of the seven years were so easy to spot: baby rolls over, gets 1st tooth, baby says first word, crawls, sits up, takes 1st step.  The changes in appearance at seven years old continue to happen at a quick clip. She is losing and gaining teeth.  Her world view is no longer self-centered. She has the capacity to understand abstract thoughts, knows right from wrong, and understands that not all things are black and white, that there are shades of grey.

When she turned seven I told her that this age was considered the age of reason.  She thought that was cool.

The complex game of chess, dubbed the “King’s Game,” requires the contemplation of both players using both short (tactics) and long range (strategy) planning with the ultimate goal of capturing the king. I figured since my older daughter is seven I could introduce her to chess.  Her level of focus has developed through the years, she was ready.

I went slowly when I taught her; I could see her really grasping the rules and comprehending the abilities and strengths of the chess pieces.  Playing with her the first time was quite exhilarating as her parent.  We marked the occasion with a lovely cup of decaf lemon tea. Now that is our thing when we play, we always have a cup of tea!

Coincidentally, a six year old girlfriend of my older daughter’s stopped over this week and immediately noticed the chess board out in our living room. The little girl announced she knew a little bit of how to play chess. I told the girls to try a game while I brewed them a cup of decaf tea. It was fun to watch these two little girls engage in the game of chess.

Each day I witness my older daughter strengthen her inner moral compass.  I see her mind stretching before her while she retains such quality information.  This stage in childhood is really a lot of fun… all stages are, no doubt.  But parenting a seven year old is much different than parenting a one year old.  Both are equally extraordinary and challenging.

As parents, my husband and I are doing our utmost to provide what we deem the *best* for our children.  I realize the next stage for my older daughter will mark her leaving the innocence of childhood and progress into puberty.  Puberty?!?!

I am so enjoying being the mother of these two little wonders, each in different life cycles – I am transfixed by them.  I notice much of my older daughter’s developed thoughts when she does her science experiments.  Yesterday she gathered samples and data for a cryogenics experiment.  She relayed her predictions for her samples and recorded her findings in her science notebook.  I could practically see the wheels turning in her head as she studied her data.

To quote William Shakespeare, “All the world’s a stage, And all the men and women merely players. They have their exits and their entrances; And one man in his time plays many parts. His acts being seven ages.” Shakespeare continues his poem by categorizing life by way of infancy, then the schoolboy age, and then the lover, transforming into a soldier full of pride and stubborn nature, then entering the justice stage fair and wise. The sixth age shifts with spectacles on nose yet a return to his youthful nature, followed by the last scene – the end of the eventful history we create.

In my personal life cycle measured by seven years I would fit in the category of 35-42 years. I am experiencing the desire to share what it is that I’ve gained through life with others, which apparently is quite normal at this age. It’s a time of facing up to what does and what does not satisfy me.

I can tell you with a pure heart that what I am doing with my kids and husband does satisfy me, on every level. Ah, I hear the tea kettle whistle – I have a date with a seven year old with – tea and chess!

Do you believe that when a child turns seven he/she enters the age of reason?

This is an original post to World Moms Blog by Courtney Cappallo of Massachusetts, USA. Courtney can be found homeschooling on her blog, Table of Four.