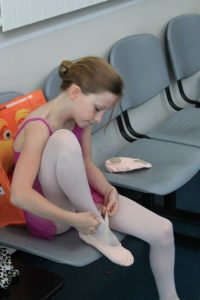 I’ve always been determined that my children will have every cultural advantage I had as a child, which means that they will know how to swim competitively, to read music, to play at least one instrument, and have an additional sport of their choice. It seemed a matter of course that they would also go to the Symphony (ballet, opera and theatre) and have cultivated a great love of reading from an early age.

But I’m starting to realize that I’m setting an unfair expectation. First of all, they do benefit from many of these things. My 8-year old daughter takes classical ballet twice a week, and has solfège (music theory) along with her piano lessons. My 7-year old son has soccer once a week, introduction to solfège and instrument discovery, which will help him choose what he will want to play in the future. My youngest son, who is only four, is taking multi-sports – his own particular activity that he takes very seriously as a participating member of the under-ten set in the family.

But Symphony and theatre? It’s too far, too expensive, too inconvenient. Swimming lessons? We can’t fit them into our already packed schedule. And reading? I’m not inspired to go to the library each week like I did as a child, because it means that they will be reading even more French, and they already get plenty of that in school. What about that love of literature they were supposed to have cultivated in English – in my native tongue? For heaven’s sake, they don’t even know they’re half-American, and keep asking when we’re going to go visit their grandparents in England again!

You see, things were different when I was a kid. My father was a symphony musician, so we attended the Symphony all the time for free. And it was not difficult to go to it, or find parking nearby.

And we benefited from free music lessons, which occurred right during school hours, with the band or orchestra practice happening directly after school. And the city lent the instruments to the pupils so they wouldn’t have to purchase them. And they paid for symphony musicians to come and give us weekly lessons right during classes. (Not everyone benefited from that, but we oboe players had no competition).

And the sports! I was on the swim team right after school, right in the school. And my brother did the same thing for soccer. That was all free too, of course. And we didn’t have those mandatory vacation months of July and August where the entire country left the country, so that’s when we did our swimming lessons. Again, for free, of course. And that’s when I was scouted for swim team and eventually became a lifeguard in the same pool I swam in as a kid.

It was all so much simpler then – everything free and organized by the school or the city – and it does not bear up under scrutiny to count how many euros I’ve spent on these rushed, stressful activities I enroll my kids in on Wednesdays, Saturdays and after school, which already finishes as late as 4:30.

What I have to remember is that I may not benefit from the advantages I had as a kid, but my children are naturally bilingual. And they know more about two different cultures, and jet-lag, and long-distance travel than I ever could have fathomed as a kid. And that really counts for a lot.

And I suppose if we’re making comparisons, we will also need to compare the school lunches – just so that every factor is taken into consideration, if you know what I mean. Yesterday, I looked up my old school district’s lunch menu and found that it boasted of popcorn chicken with dipping sauce, barbecue-baked beans, potato “gems” assorted fruit and milk “choice.”

Then I looked up my own children’s lunch menu for the same day here in France. They had sliced cucumbers in yogurt sauce, sauté of pork with mixed spring vegetables, coulommier cheese (it’s a different variety every day) with organic bread, and an apple. They drank water out of real glasses, and used real silverware, just as they do every day.

You know … as long as we’re comparing …

This is an original post for World Moms Blog by A Lady in France. Photo credit to the author.