PHILIPPINES: A Time to Help – The Aftermath of Typhoon Bopha (Pablo)

Recently, I wrote an article for Philstar.com, a local news website here in the Philippines, entitled, “We Are All Connected.” It was about the typhoon in the Philippines, dubbed internationally as “Bopha,” but known locally as “Pablo.” Allow me to share a few lines from that article here:

As Filipinos, we have witnessed our country and our countrymen rise from different calamities and disasters — both natural and man-made. We know that ‘the Filipino spirit is waterproof. We know that, after this typhoon, there may still be more to come (though let us pray that there aren’t any more) — yet we will still stand strong.”

Well, as of Sunday, December 9, the typhoon was still making its presence felt in our country, although as of Sunday afternoon, it had already been “downgraded” from a tropical depression to a low pressure area. Bopha was actually supposed to have left the Philippine area of responsibility by then, but it veered back in, the evening of December 8.

It is a tragedy of epic proportions, much like last year’s Typhoon “Washi” (locally known as “Sendong”), which was dubbed the world’s deadliest storm in 2011.

Here in Manila, where my family and I live, the effects of Typhoon Bopha were hardly felt (at least where we are located). In fact, if one were not in tune with updates on the storm via media (online or otherwise), one would probably not even realize that there were other people in the country who are suffering the wrath of the Typhoon. This is especially true, as December is the time of year when people are busy completing their Christmas shopping, or decorating their home,s or attending parties; or just generally being occupied with all that the Christmas season brings.

Yes, it is tempting to just “look the other way” and pretend that nothing has happened, especially if no one you know has been affected by a tragedy such as this. 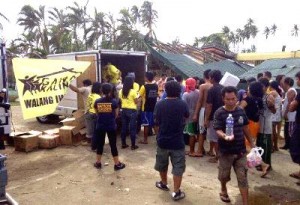 But, we are all connected. Being part of World Moms Blog has made me realize this even more. There is something that links all of us somehow. In my humble opinion, just being human connects us.

So if it’s not too much to ask, I would like to make an appeal in behalf of my countrymen who are now homeless or cramped into shelters; who have lost people they love; who have lost their lives, homes and possessions — would you be willing to help out in any way? After all, Christmas usually is a time to give and share our blessings, and what better way to do so than to reach out to those who most need our help?

Should you feel compelled to help the victims of Typhoon Bopha, Rappler.com has compiled a list of evacuation and donation centers here. International readers may find it easier to donate through non-profit organizations like ANCOP (Answering the Cry of the Poor) Foundation USA  or Gawad Kalinga. If you do choose to help — even if it’s just by lifting up the typhoon victims in prayer or sending warm thoughts their way — I know it will make a big difference.

“We may have different religions, different languages, different colored skin, but we all belong to one human race.” — Kofi Annan, 2001 Nobel Peace Prize recipient.

This is an original post to World Moms Blog, by Tina Santiago-Rodriguez in the Philippines.