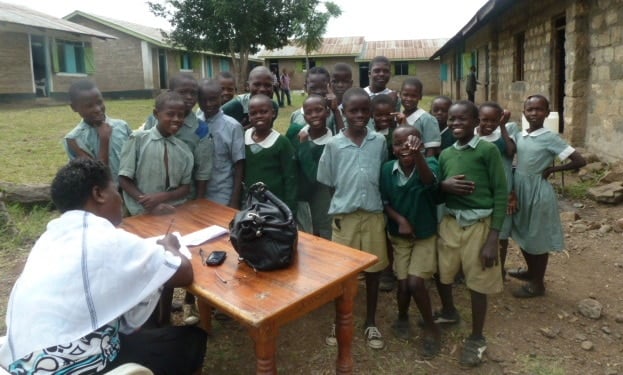 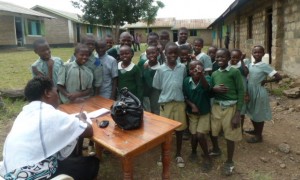 Children wait for their names to be recorded and then given their deworming tablets in Nyanza, Kenya.

There’s a minuscule pot of money globally to solve those intractable problems of poverty around the world. Sure, there are a lot of sources: foreign aid, UN agencies, global and local charities. But they are dwarfed by the size and scope of human need, which governments in low-income countries cannot, for a variety of reasons, completely address. The international development world is in constant battle for this pot. “

Look at me!” says HIV/AIDS.  “Over here!”, says malnutrition.  “We’d like something, too!”, says access to credit for small business.  “Don’t forget about us!”, say malaria and tuberculosis.  These are all worthy causes, so it’s a struggle.

And the global community does not necessarily prioritize or coordinate our global giving on the basis of need of recipient or effectiveness of the solution. Generally, it appears based largely and unscientifically on “what’s sexy” at the time.

So, what makes a cause “sexy?” Well, it helps if your cause wins some Jolie-Pitt endorsement. It helps a lot when NY Times writer Nick Kristoff writes a book about your cause. Oprah will do wonders. The more you can argue your beneficiaries are “deserving” of aid – that they had no part in creating their own suffering – the better.  Children and victims of violence pull on heartstrings and wallets.  Victims of epic natural disasters animate our compassionate imagination and spur our giving. More money flew into Haiti in the wake of the earthquake and Indonesia in the wake of the tsunami than NGOs had the capacity to spend.

So, what if you have a completely deserving, but unsexy, cause?  What if your cause is the polar opposite of sexy?  What if it’s worms?

Parasitic worms affect 2 billion (that’s with a “b”) people, mostly children, around the world. They live in their tiny guts, sapping nutrition from sometimes meager meals, making them sick, lethargic and less able to learn and thrive. They rarely kill, but they exact a large slow toll on millions of humans’ potential.  They keep children from escaping poverty.  They arguably keep whole countries poor. In fact, research shows that part of what kept the American South economically lagging behind the North is explained by the parasitic worms endemic to that area.  Once hookworm eradication began, literacy rates and even income levels shot up.

Parasitic worms are part of a group of illnesses called Neglected Tropical Diseases or NTDs.  Did you catch that?  “Neglected.”  Meaning they are defined by the fact that the powers that be are ignoring them.

And in many areas of the world worms are so prevalent that parents sometimes view them simply as a symptom of childhood and, amid myriad other concerns, neglect to get their children treatment. Even when parents do desire treatment, health centers are often far away, expensive or under-resourced.  So, despite the fact that worms are treatable, they are often left untreated.

All of which is doubly tragic because unlike so much other global disease burden, there is, in fact, a safe, simple, and inexpensive solution.  Deworming pills cost pennies and are completely safe even if a child does not have worms, which negates the need for expensive diagnostic tests.  Rigorous research has shown that dewormed children are healthier, attend more school and, remarkably, even make more money as much as a decade later!  But how to get the pills in the mouths of all these children?

Enter school-based deworming.  Because there are far more teachers than health workers and schools than health centers, using the schools to distribute deworming pills, once or twice a year, is incredibly efficient and cost-effective.  Teachers can be trained easily to safely administer the tablets, and un-enrolled students can be invited to attend a “deworming day.”  Literally, millions of children can be reached this way in a matter of days.

But the fight, even in these places, is not over.  Even though a small pill will kill the worms currently infecting their child host, children can become reinfected if sanitation is not improved, and the overall worm prevalence will likely rebound unless a multiple year campaign is launched.  Because worms spend part of their life cycle in human guts, a sustained campaign can significantly reduce the overall prevalence of worms.  But funding a sustained campaign is often difficult for cash strapped governments, and charities struggle to raise continued funding.

And here we come back to the unfortunate unsexiness. In the last paragraph I mentioned “guts,” “worms,” and “human hosts.” I spared you “fecal contamination,” “stool samples,” and the grittier details of worm transmission and detection. I also spared you the mundane details about training, monitoring and implementing a mass deworming program.  None of these details inspire or animate donors.

But what should inspire donors is the idea that this program works.  This program helps children now and well into the future, and at a relatively low-cost.  This program addresses a multiple of sectors: health, nutrition, education, and economic security.  This little pill just might unlock a lot of development.  Now we just need to unlock all that funding.

What causes animate you?  Why were you drawn to them?  What do you know about their impact?

[If you want to learn more about school-based deworming, visit the Deworm the World Website.  If this cause moves you, feel free to make a contribution here.]

This is an original post to World Moms Blog by our writer in Kenya, Mama Mzungu, who blogs at www.mamamzungu.com. Opinions in this post are the author’s alone.