Saturday Sidebar: How many children did you want and how many do you have? 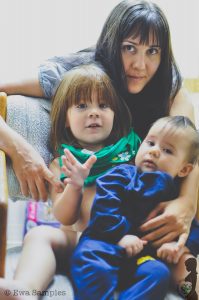 World Mom, MomPhotographer with her 2 daughters

This week’s Saturday Sidebar Question comes from World Moms Blog writer Susie Newday.  She asked our writers,“How many kids did you want before you were married and how many do you want now, now that you have kids and know what it is like?”

Carol @ If By Yes of British Columbia, Canada writes:
“I wanted two, now still want two, but sort of also want three! My husband is sticking at two, though.”

“I come from a small family so always idealized big families. When I was little I wanted 6 kids, but at some point I decided four would be a good number. Despite the chaos I am grateful every day for our four kids and our full house.”

Jenna Farelyn of North Carolina, USA writes:
“I wanted a big family. I have four kids. I would like to have a few more.”

Karyn Van Der Zwet of New Zealand writes:
“I always wanted three kids and Craig was terrified of the thought of having any. We ended up with three :D.”

MamaMzunga of Kenya writes:
“We both love 3. I was one of three and it just always seemed to define a family to me. I’m now 38 years old, have a baby and a 3 year old and a back ache and continual sleep deprivation. We’re stopping here.”

Maman Aya of New York, USA writes:
“I wanted 2. Now that I have 2, I’m longing for a third, but hubby was happy with one and is set at two (I don’t know that he’d be able to deal with a third – the 2 that we have really are a handful!)”

Margie Bryant of Arkansas, USA writes:
“Well I wanted two or three. Then I proceeded to have three before getting married. Since one child died, I always wanted one more. But that’s out of the question with my fiancé, so two for me.”

Meredith of Nigeria writes:
“I don’t think I ever had a number in my head but I knew I wanted more than one. I didn’t expect to have trouble getting pregnant. After everything we went through to bring my son home, we were blessed enough to have my daughter also. I am so grateful for those two little ones every day. We are done with 2.”

Mrs. P Cuyugan of Philippines writes:
“I wanted at least 5 kids! Now I think I’d be perfectly happy with 2, 3 kids max. So I’m really hoping for a girl when we have our next one, so we’ll already have a girl and a boy and no more pressure.”

Polish Mom Photographer of California, USA writes:
“I was raised in a family with 3 kids and as an adult I’ve always known I do not want to have only one child. I thought, 3 is a pretty good number,  ended up with 2 and there is no possibility to have another one, only by adoption, maybe, but for now we are more than happy with 2.”

RoxIsBrilliant of Nevada, USA writes:
“I always wanted 2 kids. Now that I have 1, and I know how much I despised being pregnant, I’d be perfectly happy if he was my only one. (Although there is still a part of me that might like a 2nd one of these days…should an appropriate partner ever be found). I wrote a post kind of addressing this topic in early 2011: http://www.unintentionally-brilliant.com/2011/03/on-siblings/”

Truly Rich Mom of Philippines writes:
“Before we got married, hubby and I agreed we both wanted four kids. 🙂 We’re now pregnant with our third. 😀 We have always been open to life and to what God wants for our family, though, honestly, there are times when I feel like three is more than enough! 🙂 LOL! Let’s see!”

AnaGaby@StumbleAbroad writes:
“When we were dating my now husband kept saying he wanted at least four kids in order to keep up with his younger brother. I always said I wanted at least two and three at the most. Now, after having two little ones we do want to add one more bundle of joy to our family but we are so tired chasing our rambunctious little boys that we are probably going to wait a little while. We are just so blessed to have our two little monsters that we want to add one more to the equation and see how the balance of powers turns out…”

I was not sure before getting married, then I decided I perhaps wanted 4 – and he leaned towards not wanting any and traveling the world. We had one, adopted one … so two I guess was the compromise.

What about you… How many kids did you want before you were married and how many do you want now, now that you have kids and know what it is like?