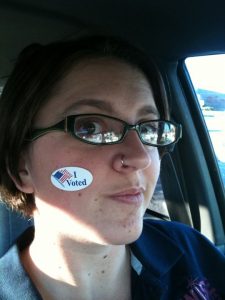 Here in the States, it’s election time. That glorious time of year when you can’t turn on the television or the radio or open your mailbox or drive down the street without being bombarded with all the VOTE FOR ME advertisements.

I hate this time of year.

The election signs make our neighborhood look trashy, the mail just gets tossed so it’s a waste of paper, and my Facebook timeline is filled with arguments about whose candidate is better for America (or Nevada, when it comes to local elections). People get mean. Vicious. And it makes everyone just seem ignorant.

It’s also the one time, every four years, when I’m forced to rethink my stance on everything. I question everything I believe in. And, I wonder, with how ill-informed I feel most of the time when it comes to politics, how will I ever be able to teach  my child how to make his own decisions when it comes to our democratic process?

On the rare (and I mean rare) occasion that I find myself in a politically-driven discussion, I find myself merely regurgitating so-called facts that I’ve heard on the news, or from my friends, or from the increasingly annoying emails from Planned Parenthood, Barack Obama’s campaign headquarters, or the Democratic Party.

I almost hate to admit that I’ve unsubscribed from all those emails, simply because I’m not sure I can actually believe them anymore.

Don’t get me wrong. I know where I stand on certain issues. And, yes, when I first registered to vote I believed I aligned more with the Democrats than the Republicans. So I am a registered Democrat. My problem, it seems, is that none of my information is unbiased. And with things the way they are, it’s getting more and more difficult to find unbiased information. Even news organizations have become biased (and don’t try to tell me they aren’t). They endorse certain candidates, and they spin the news on the candidates in whatever way will make their choice sound like the best choice.

The issues that matter to me most, are talking points. They only seem to really come up when it’s an election year. After a president is elected, they disappear from the headlines and it’s even more difficult for me to keep up with what’s going on. And, especially just this year, I start questioning why they matter to me. I’m not the same person I was four years ago; maybe it’s time to reassess what’s really important.

My six-year-old son sees the advertisements. He hears Obama and Romney’s names occasionally, and he tells me that he wants Obama to win.Not for any particular reason, except that he’s the president and, so, should continue to be president. It’s the logic of a six-year-old.

But by the next time we have an election, he’ll be older and more aware of what an election means. Maybe he’ll see how it affects our lives. He seems much more aware of the world around him than I did at his age. He’ll want to know, whereas I didn’t take even a slight interest in politics until 4 years ago.

So I have to ask myself: How can I educate myself in a way that filters out the bias that is inherent in an election year’s news media? How can I help understand our democratic process in a way that will help me explain it to my son, when he starts asking the questions I am only just now starting to ask?

How do you explain the Democratic Process and elections to your kids?

The photo used in this post is credited to the author.

Like Loading...
« UGANDA Day 2: Family Health Day at Mubende Town Mosque
NORTH CAROLINA, U.S.A.: Put Down The Book and Pick Up The Baby »