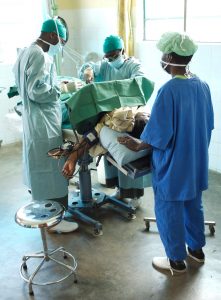 I was 32-weeks pregnant with my son when we moved to Seoul from Seattle. When my spouse first got this assignment my knowledge of Korea was admittedly narrow, but because of all the research I had been doing on pregnancy and childbirth, the one bit of information that I did know was that Korea had an even higher rate of C-Section than the United States. The rate of c-section in the US is a staggering 30%, while here in South Korea it is an even more staggering 37.7%.

One of the things that is surprising about this number is that, in a study conducted in 2000, when polled, the majority of pregnant South Korean women said they prefer vaginal delivery. The study was done when the c-section rate was nearing 40% and researchers wanted to know if this rise had to do with women’s desires and attitudes towards childbirth. The study concluded that the rapid rise in C-section rates was related to health care practitioners and the health care system, not women’s attitudes or desires.

So, what’s happening? In a country that has skyrocketed to first world status in 50 short years, why aren’t women getting the medical care they desire?

Confucian ideals and principles lie at the heart of this rapidly modernizing society. They are the subtext to every interaction. The main principles of Confucianism can be very broadly summarized as:

While I do not disagree in theory with all of these principles, their effects on this society have led to an inequity among men and women that, I believe, leads to difficult circumstances for women when it comes to birthing. Being loyal to family and respecting elders and superiors means being, if no longer submissive, at least deferential not only to the men in their lives but to anyone whose position in society is “higher” than theirs.

Given the high social status of doctors, many of whom are men, it is no surprise then that, despite women’s clear preference for vaginal birth, the preference of the medical professionals and health care system which favors c-section, win out.  A woman’s role in society, as seen through Confucianism, is to maintain social harmony. Basically, don’t rock the boat.

Given South Korea’s rapid modernization and what can only be described as a national obsession with technology it is perhaps the case that some of these medical professionals believe that scientific and medically advanced technologies are inherently preferable or desirable. Their unnecessary and unwarranted high use, however, in my opinion, reveals not a highly developed society but instead one that is all too eager and willing to cut open a woman’s body rather than trust and respect her body’s ability to birth a child in the way that nature intended. This is particularly confusing given the emphasis that respect for nature and its principles has within the Confucian framework.

Despite other signs of modernity – being the most-wired country in the world, for example – women are in no way seen as equals, evidenced by everything from their lower wages for the same work to their inability to break into management positions. South Korean women are among the best-educated and least-employed women in the world. They are expected to excel in their academic pursuits, but then to find a husband, have children, and devote the rest of their lives to caring for their families.

It is as if South Korea is caught between two worlds. It is a country that is very eager to go barreling into the future, but is still very deeply entrenched in the old ways.

The result is an onslaught of mixed messages, especially for women. Respect nature, but don’t trust the natural processes of your body. Work very hard to excel in school but abandon ambition once you’ve graduated.

South Korea is not alone in the rise of c-sections. The overuse and misuse of c-section is endemic in the developed world. It is often assumed that rising c-section rates are a result of women requesting them or due to more complicated pregnancies, but neither of these assumptions can be proven.

This, perhaps more than anything else, highlights the generally low regard in which women and their bodies are held throughout the world. In the developed world, doctors with their own agendas and interests subject women to risky and unnecessary abdominal surgery. In the undeveloped world, women are denied the scientifically advanced care that could save them.

The fact is this disregard for women and their bodies exists in countries that do not have a Confucian influence. So then here in South Korea is Confucianism and its principles really the problem or just the excuse?

Gender equality will never be achieved in any country where women are not the architects of their own birthing experiences. If we truly value the lives of women and children we need to build societies that empower women and allow them to make choices about having children and about how they will birth those children. They must have access to medical professionals and facilities that are equipped to intervene but only do so when necessary or desired. In the meantime, the countries who are building these societies will advance, while those that don’t will lag behind.

Unsure of the connection between equality and c-section rates? Finland scores very high on the OECD Better Life Index. They lead the world in terms of education, gender equality, maternity and paternity leave, work-life balance, civic engagement, life satisfaction and many other measures.

What are your thoughts on C-section and their staggering increase in the developing world? Do you have a birth story about c-section over vaginal birth?

This is an original post to World Moms Blog by our writer and mom of one in S. Korea, Ms. V

The photo used in this post is credited to Goma Sykestue 64. It holds a Flickr Creative Commons attribution license.