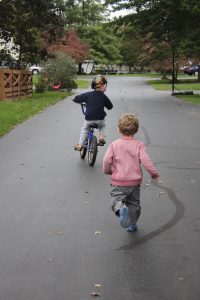 Breastfeeding, potty-training, giving birth, discipline, homework, feeding, you name it and it’s likely for some those things have come easy with minimal heartache and for others, they have struggled so much with few positive results. I think it’s easy in this journey of motherhood to get caught up in comparison and even tinges of jealousy over other moms successes. We want to know that we measure up and can be successful. But at some point, we have to embrace each others joys and victories and learn from each other. Let your successes be things you can share and let the things that feel like failures be things to strengthen through other mom’s positive experiences.

We talk a lot here on World Mom’s Blog about social good and reaching out to moms around the world. This blog is having a hand in life saving work. And that is huge! There is no denying the need to feed the hungry, immunize the impoverished and bring hope to the darkest corners of the globe. But I am curious, how much mercy do we show the mom next door?

Are we in competition with one another or building one another up? Are we throwing each other a lifeline and cutting each other some slack?Look at the moms you interact with each and every day. Think about your neighbor, sister, church friend… She might not need you to buy her groceries or carry a literal burden for her, but she might need some camaraderie. And she needs it in you.

How comforting is it to come to a friend and know that she has faced a challenge that you are about to encounter? Her process may have been different and her outcome might not match yours but you can gain some encouragement from being in the same boat.

My son and I attend a group for Mothers of Preschoolers (MOPs). It is worldwide and so worth looking into!!  Years ago, my aunt was involved in it, it was before I had kids but it still sounded so neat. I joined for the first time when my oldest son was 2 ½. A quote from one of their fliers has stuck with me ever since

“MOPs moms don’t let moms mother alone”.  We are all in this together! We are on the same team.

Are you in a network of mom’s that support one another or has the competition gotten the best of you?!  What mom can you be gracious to today that might need some encouragement?

This is an original article written for World Mom’s Blog by contributor Kristen Kolb. You can visit Kristen on her personal blog, www.seasonsworthsavoring.com.   Kristen and her family were previously in Bern, Switzerland but have recently moved State-side for a posting in the Washington, DC area.