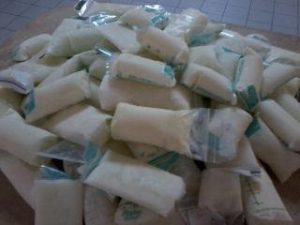 Last week, a few breastfeeding advocate friends of mine alerted me and other moms to the fact that September 24th through the 30th of this year is World Milksharing Week. According to the official website, World Milksharing Week is held annually during the last week of September with this goal in mind: “to celebrate milksharing and to promote human milk as the biologically normal nourishment for babies and children.” You can read more about how the idea for this came about here. The theme for this year’s Milksharing Week is “Sharing Milk, Nurturing Community.”

Even though I consider myself pro-breastfeeding (I don’t think I can qualify as a true-blue advocate yet) and even have quite a number of blog posts about it, milksharing is something that I never really gave a serious thought about before. That was, until I read about breast milk donations, especially during times of emergencies. (You can read a bit about them here and here.) I realized that breastfeeding truly does save lives and formula milk donations could prove hazardous to the health of children affected by disasters such as typhoons and earthquakes.

Think about it: When people are stuck in evacuation centers or refugee camps, there is usually a shortage of food supplies and clean water. Diarrhea outbreaks are very common and spread easily due to the lack of proper health care and sanitation systems. According to this article on Protecting babies in emergencies: the role of the public, “babies who are not breastfed are very likely to contract diarrhea-causing illnesses from unclean water and, with a weakened immune system and limited treatment, many will die.”

Here, in the Philippines, breast milk donation drives were carried out in the aftermath of typhoons Ondoy and Sendong and the recent heavy monsoon rains that caused massive floods everywhere. However, public awareness about such relief operations is still quite low, and many aid organizations still sent out calls for formula milk donations.

Of course, donating formula milk may seem like the more practical thing to do in times of emergency, but people need to be aware of the long-term, drastic effects introducing formula milk during disasters may have on infants and children.

Personally, I’ve never shared my breastmilk with anyone else — primarily because both of my kids breastfed directly (well, our youngest still does at present, even if she already turned three, and I’m currently pregnant with our third child). This means that I never pumped, nor stored breastmilk. So, I never had breastmilk to donate.

Now that I’m pregnant again though, and anticipating having to pump and store my milk in the future (since my working conditions now are different as compared to before), I am fairly excited (though half intimidated, ha, ha!) at the thought of stashing “liquid gold” and being able to share it with others if needed (yes, I’m idealistic like that!).

I was especially inspired to do so after reading the story of Melissa Menes on a breastfeeding community Facebook page, a Filipina mother who discovered that the daughter she was carrying in her womb had congenital diaphragmatic hernia during her fifth month of pregnancy. The doctors didn’t give her a good prognosis, but still, Melissa and her husband chose to go on with the pregnancy. They promised their little girl that even if she didn’t make it, they would commit to donating Melissa’s breastmilk “to give other babies a chance.”

True enough, Melissa’s little girl passed away a day after she was born. And true to their promise, Melissa started pumping her milk and donated it to babies who were in the Neonatal Intensive Care Unit of the hospital where her daughter was born. As of this writing, about ten babies have been receiving her milk for the last two months.

When I think about Melissa’s story, my heart aches for her loss and yet, at the same time, rejoices at her selflessness. Her love for her daughter is, in a way — and perhaps, the most concrete way possible — being shared with many other children. She is sharing the very best of herself to others, and at the same time, is slowly healing, too.

In her own words: “The loss of a baby throws off your perception of the world, because babies are not supposed to die. But the experience of donating breast milk has been a great help to us during this time.”

Sharing the very best of ourselves is not an easy thing to do. It would be so much easier to just focus on our needs, our wants and our hopes and dreams for our own children. But I believe becoming a mother changes so many things about ourselves — we become more selfless, more giving, more considerate of others (at least ideally, we do!). I only hope and pray that when my time comes to be a “new” mother the third time around (isn’t giving birth always a “new experience”?), I can be as selfless and giving as Melissa is, and donate my breastmilk when needed.

Do you have any milksharing stories of your own? What are your thoughts about breastfeeding and sharing one’s breastmilk with others?

This is an original post to World Moms Blog by Tina Santiago-Rodriguez.

The image used in this post is credited to the Medela Moms Philippines and is used by permission from the group.